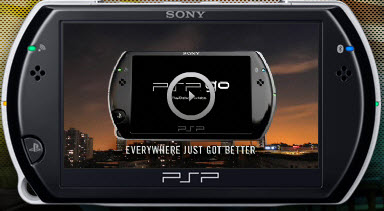 The device will sell for $249 in North America and will have no universal memory disc drive, as its predecessor does. Rather, it will have 16 gigabytes of flash memory that you can use to download games directly from Sony’s media store. It has built-in Wi-Fi and a number of other features that make it more competitive with something like the iPod Touch from Apple. It was an interesting gambit from Sony at the E3 trade show in Los Angeles, where 40,000 game industry followers are gathering this week.

Sony will also launch its Media Go service to sync games and other media with a PC. It has a slide-out keypad with game controls. Sony is working on games such as the Gran Turismo racing game for the PSP. Hideo Kojima and Konami will also make a new version of the Metal Gear stealth games on the PSP, and Capcom will make a version of Resident Evil for the PSP. 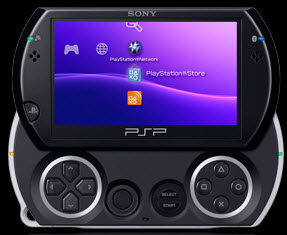 The PSP has sold more than 50 million units, but it remains a distant second to the Nintendo DS, which has sold more than 100 million. This new PSP is 50 percent smaller and 40 percent lighter than the previous one. It will also have integration with Facebook via Facebook Connect.

The PSP Go will launch in Europe on Oct. 1 for 249 euros and in Japan for 26,800 yen. It will be available in piano black and pearl white colors. The system supports games, movies, videos, photos and music. Sony is lining up a bunch of games for downloadable purchase on its PlayStation Network Store. Users will be able to use a SensMe app that automatically sorts music into playlists by mood. If you want to have romantic music, then SensMe will organize a list for you with plenty of Barry Manilow (just kidding).

Other features include a Game Sleep mode where you can interrupt a game to do other things and then go back to the game. It can connect via Bluetooth to a variety of peripherals. The display is 3.8 inches diagonal. It has a memory stick micro slot for memory expansion. 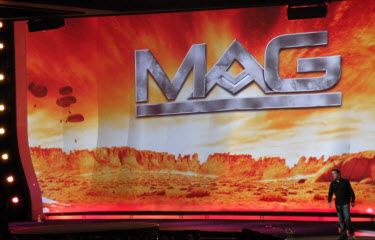 Sony also showed off some big new potential blockbusters. One is Massive Action Game, an online shooter game where 256 players can play at once. Typically, such games on consoles can accommodate no more than 32 or 64 players. In this game, commanders can organize players to storm an enemy’s base.

One of the most beautiful games Sony showed was Uncharted 2: Among Thieves, a shooting/adventure game that has stunningly realistic graphics. In the scene they showed, you had to fight off a helicopter gunship, navigate through some dizzying heights and obstacles, and fight off thugs at the same time. You could hide behind completely destructible cover, which gave the impression that everything in the landscape was interactive. The cut scenes blended very well with the game play. The only other games I’ve seen that come as close so far is Assassin’s Creed 2 or Tom Clancy’s Splinter Cell Conviction from Ubisoft.

Other big titles coming which also features outstanding graphics were God of War III, coming in the spring of next year, and The Last Guardian, the latest in a series of games that also included Ico and Shadow of the Colossus.

It’s a great line-up. But Sony neglected to make one big move. It decided not to cut the price of the PlayStation 3, which at $399 is woefully over-priced during the recession. It could be a very bad move.