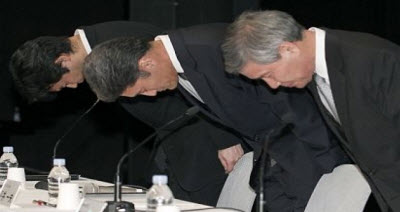 Sony reported a $199 million loss in the first fiscal quarter ended June 30 because of problems including the Japan earthquake and the hacking of the PlayStation Network.

Like Nintendo last night, Sony also cut its profit forecast. Sony said it lost 15.5 billion yen ($199 million), compared with a profit of 25.7 billion a year earlier. The announcement shows how quickly things can change for dominant companies in industries with rapid changes and unforeseeable events.

In the quarter, Sony’s movie division earned an operating profit of 132.1 billion yen, up 9 percent, thanks to films such as The Green Hornet, Battle: Los Angeles, and Just Go With It. But consumer products and services reported an 18 percent decline to 732.3 billion yen because of lower LCD TV and PC revenue. Music sales were down 0.6 percent.

The PlayStation business saw a slight profit, thanks to PlayStation 3 software sales. Sony sold 26.1 million games in the quarter, up 5.2 percent. But PS 3 sales fell by 25 percent, down to 1.8 million units sold, probably because of the six-week outage the company suffered after the PlayStation Network was hacked.

So while Sony’s president in charge of network entertainment Tim Schaaf, who oversees PSN, said the downtime was a “great experience,” it wasn’t such a good deal for the company’s bottom line.

The PS 2 sold 1.4 million units, down from a year ago, and the PlayStation Portable sales rose 50 percent to 1.8 million units.

One of the big products coming this fiscal year is the PlayStation Vita, a replacement for the PSP and Sony’s best hope for competing with the Nintendo 3DS and Apple’s mobile devices. Damage to Sony factories from the quake and tsunami amounted to 5.3 billion yen, most of it covered by insurance. But Sony said the recovery was progressing faster than expected. A strong yen also hurt Sony’s profits, as it made Japanese products more expensive overseas. Sony also said it will start selling its first tablet computer soon.

Sony said that user logins in North America on the PSN had been restored to the same level as before the attacks.

As for the game business, Billy Pidgeon, an analyst at M2 Research, said, “These numbers are very bad for Sony considering the competition and where we are in the cycle.”

PSP sales are up in Japan, but that is an anomaly, Pidgeon said.

“PS3 hardware numbers ought to be up, not down,” he said. “There is great software in the pipeline, but hardware price may need steep cuts or the new software won’t help. Xbox 360 is still selling strong and is capable of price elasticity.
Microsoft can cut prices and potentially murder Sony through the holiday into 2012.  In fact, Microsoft ought to use this opportunity to improve positions worldwide.