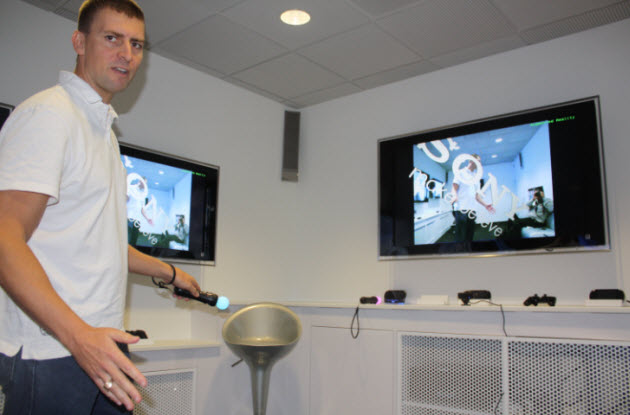 Richard Marks, co-creator of the PlayStation Move, likes to be right on target. He has worked at Sony Computer Entertainment America in Foster City, Calif., for the past 11 years, always working to perfect Sony’s recognition and control technology so that it can be as precise as possible. Marks’ latest effort, the wand-like Move controller, debuts on Sept. 19, with some 20 games available at the launch. 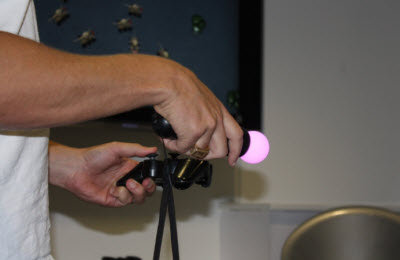 Marks began working on a natural user interface for games back in 1999, after Sony showed a demo of the PlayStation 2. He invented the PlayStation EyeToy, which debuted in 2003 on the PS 2 and has sold more than 10 million units worldwide. Sony created a new PlayStation Eye camera for the PlayStation 3, and now Marks is using that camera as part of a new Wii-like motion control system — but one that is far more accurate than Nintendo’s.

In an interview, Marks said that the controller has all of the key positioning technologies to know precisely what a person is doing with their hands. The Eye camera focuses on the glowing ball at the end of the Move controller. The controller also has an accelerometer to sense direction and a three-axis gyro chip to sense subtle movements, such as the flick of a wrist. It knows, for instance, exactly how you are holding the grip of a sword (unless you put your hand behind your back, out of view of the camera). Since the Wii lacks a camera, it can’t see exactly where your hand is. And while Microsoft’s Kinect has a 3D-positional camera, it has no handheld wand, so it doesn’t know whether you are pushing buttons and it doesn’t know what you’re doing with small hand movements, such as pulling a trigger. The Move also has a magnetometer, or compass-like device, which tells you which way it is facing when there is no movement. 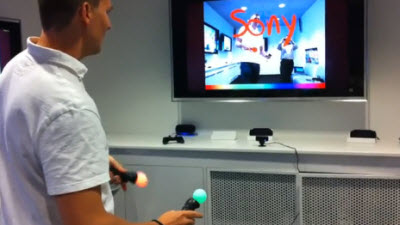 It took about two or three years of serious development to get the Move done. Game developers got their hands on it about a year ago to prepare for the launch. Marks said that he investigated using the 3D cameras that Microsoft uses, but he found the costs to be too high. In a demo, Marks showed there are a lot of different kinds of actions you can take while holding a Move controller. You can grab things in a 3D space and move them around. Since you’re captured on camera, a game developer can insert you into a game, augmented-reality style.

When you hold out your hand and point at a screen, developers can adjust the accuracy for what the application needs. If you have a shaky hand, the device can smooth out the shakes so that you can 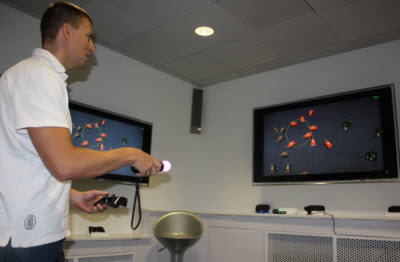 easily point at and click on a button on a screen. These are some of the things that you can’t do with a normal video game controller. But if you are shooting at something on a screen, the developers can make the control much more sensitive to your hand jitter. The point is that developers can choose what kind of accuracy they want.

“You can cover the whole range of human motion,” Marks said. “The most important thing we heard from game developers is that they always wanted to accurately know where [their] hands are. It can be stable, and yet precise.”

The possibilities are endless. You can play ping pong and put a lot of english on the ball with a twist of your wrist. You can play exercise-oriented games that get you winded. And you can play shooting games that could feel more realistic because they force you to behave like you would in the real world. The device can track as far as 12 feet away from the TV set. If you find you’re getting off the couch to play video games a lot in the future, you can blame Marks.

I caught up with Marks for a recent video interview at Sony’s U.S. headquarters. Check it out below.