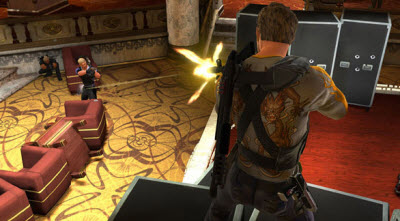 Sony Online Entertainment confirmed today that it will cut 205 jobs and close three studios as part of a restructuring effort.

The company is the online game arm of Sony and it publishes massively multiplayer online game worlds such as DC Universe Online and Free Realms. The closures show that online games remains a tough business and it remains very difficult to start big MMOs and bring them to completion.

A case in point is The Agency (pictured), which Sony Online Entertainment started talking about many years ago but never shipped. SOE is now discontinuing produciton of The Agency, a spy-themed world, and it will focus its resources on two games coming up based on its Planetside and EverQuest properties. Studios will be shut in Denver, Seattle and Tucson, leaving Sony with studios in San Diego and Austin.

Sony said that “all possible steps are being taken to ensure team members affected by the transition are treated with appropriate concern.” Sony said the restructuring will have no impact on the company’s existing portfolio of games that are already operating. The work in Denver and Tucson will be transferred to San Diego. In the past year, more than 20 million game players have visited Sony Online Entertainment games in the past year.

Sony Online Entertainment announced this week that it was shipping Free Realms on the PlayStation 3, the first free-to-play MMO to ship on a console. Sony made its restructuring announcement after Kotaku ran a story about layoffs, after game industry veteran George Broussard tweeted about it.