SAN FRANCISCO — Sony Online Entertainment was one of the first developers to learn that massively multiplayer online games need to be continuously evolving in order to keep potentially millions of players engaged over the course of many years. In today’s market, players need to have a hand in guiding that evolution, and that’s the mantra guiding the development of Planetside 2 and EverQuest Next Landmark.

We could view this as SOE coming full-circle on something it pioneered in 2003 with the release of Star Wars: Galaxies, in which players could craft almost every item in the game. We could also look at it as SOE taking a nod from Eve Online, which figuratively provides a sandbox and steps back to enable players to do whatever they want with it. Eve Online has been so successful that it continues to run off a subscription model even though that the MMO worlds considers that monetization scheme is dying — or already dead.

Planetside 2 and EverQuest Next Landmark are free-to-play games, and SOE has demonstrated with Planetside 2 that it understands the right way to deploy the F2P model. You give the player a deep experience and then count on engagement and loyalty to motivate players to spend money. The Planetside 2 Roadmap transparently lists upcoming changes to the game and solicits player feedback, and we spoke about some of those upcoming additions in more detail with Tramell Isaac, the senior art director for Planetside 2. 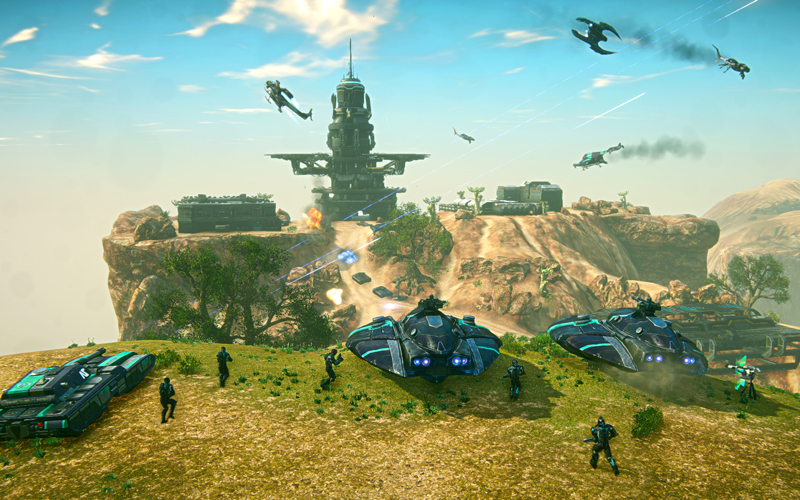 Above: If these players are part of an organized Outfit, they’ll have a much easier time taking that base.

Join up and see the universe

Outfits in Planetside 2 are like independent battalions within armies. They’re roughly comparable to guilds or clans in other MMOs. The chief benefit of a guild or a clan, other than forging in-game relationships, is providing the necessary organization to tackle late- and end-game content. For a combined-arms multicontinent warfare exercise like Planetside 2, the overall state of the war and the ebb-and-flow of territory control is the endgame. From that perspective, outfits are not as optional in Planetside 2 as guilds and clans are in other MMOs.

The endgame in Planetside 2 is also not a matter of static, high-level experiences that players earn the right to engage with by ranking up characters. Players are engaged with Planetside 2’s endgame and hence crafting the game world with the very first shot they take. SOE is trying to make it easier for players to find and join outfits and therefore hook new Planetside 2 players into the game more quickly.

“We’re trying to get a good, clean spot that’s useful and something that’s not intrusive, something that can be seen by everybody but not necessarily like ‘Bam! In your face! Come with us!’” said Tramell.

Players in Planetside 2 fight for control of bases that are roughly the size of a map in Call of Duty, and bases litter each continent, which inspired one idea in development to advertise outfits . “If you’re part of an outfit and you capture a base, your logo gets splattered where the flags are, so everybody knows which outfit actually captured the base,” said Tramell.

SOE is developing a mission system for Planetside 2 that will more easily tie players into the metagame. The first iteration of the system is in beta testing, and it’s driven by procedurally generated missions that reflect battlefield conditions, such as directing players to hotspots on the map to achieve certain objectives.

“Then it’s going to evolve into I as an outfit leader, or I as a platoon leader or a squad leader, being able to say, ‘We need [heavy infantry] in this area,’ and if you’re [heavy infantry], you show up there and you get XP for showing up because you just completed that mission,” said Tramell. “We’ve worked a lot on the [character] classes, and expanding the role of the classes, but one thing we haven’t really touched is that command role.”

Community Clash organizes battles between teams from different player outfits in Planetside 2. Each outfit fields 24 or 48 players and fights with other teams in a tournament-style bracket system. SOE caught wind of this and donated server space to enable the Community Clash players to conduct their tournaments without being bothered by the larger war erupting all around them.

Sony Online Entertainment’s API team assists the player-developers of the Recursion Real Time Stat Tracker, a user interface overlay that enables Planetside 2 players to track their performance info, and which also includes audio information like announcing the player’s headshots and double kills as a kind of motivational tool. SOE gives the Recursion developers access to the Planetside 2 statistical data they need in order to make the overlay a success.

“Our job as developers and for the longevity of the product is to allow people to make this thing expand organically, as opposed to forcing, ‘Here’s the rules, you play within the rules or you don’t play at all,’ like most developers do,” Tramell said.