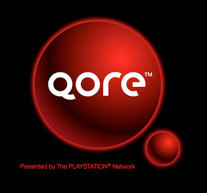 As I sit around my living room looking at my $150 cable bill and stare at the multitude of set top boxes I have hooked up to my television set, I often wonder if there won’t be a day where we get all of our content over the Internet on one box. By this I mean everything: movies, television shows, music and video games.

As of right now the video game consoles seem perhaps best poised to handle such a task as they are both powerful and widespread. Two in particular, Microsoft’s Xbox 360 and Sony’s Playstation 3, already offer some of this media content; however it is second-hand, being placed on these networks after it has shown in theaters, been on DVD or played on television. Today, Sony is lauching a program that is Playstation Network-exclusive, Qore.

Not surprisingly, this show is video game-centric, but Sony appears to be taking it seriously by pulling in the host of Revision3’s Tekzilla and former Mahalo Daily host, Veronica Belmont, to anchor the series. The show is filmed in HD and will offer gamers a behind-the-scenes look at some of their favorite Playstation games and exclusive content.

There are a couple of downsides. First of all, each show will be $2.99 (or $24.99 for an annual subscription to all 13 episodes). This seems a bit high given that most television content on iTunes is only $1.99. However, it’s also important to note that while Microsoft’s Xbox Live network is $50 a year for a gold subscription, Sony’s Playstation Network is free.

The second downside is that the show will only be available on the Playstation Network, and you will have to have a Playstation 3 to watch it. This gets back to what I was talking about earlier, the idea of these video game consoles getting exclusive, first-run content. It will be interesting to see if Sony expands upon this idea with other shows or movies. Remember, it does own a movie and television studio.

Microsoft is using its Xbox Live service for a similar concept, but on a much smaller scale. Its director of programming for Xbox Live, Larry Hryb, aka Major Nelson, hosts short video podcast that go up on the network on Thursdays. These segments are free, however they are only one minute long. Qore will be 40 minutes long.

I hope that one day I’ll be able to ditch my cable company and get all my content over the Internet on something like a video game console. However, if companies like Time Warner Cable get their way with metered Internet usage, that will not happen.

Belmont has a bit more about Qore in a Q&A post on her blog.