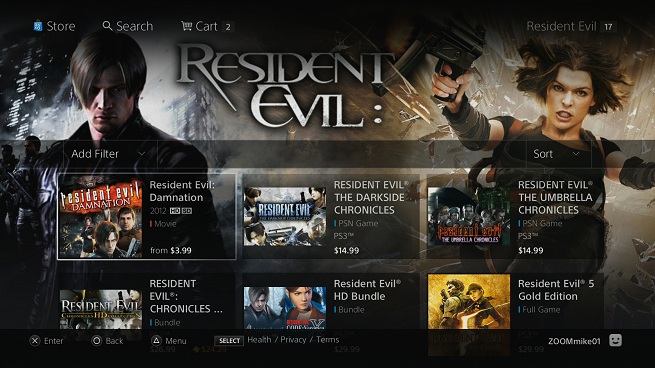 Sony has done a major overhaul of the look and feel of the user interface for the Sony Entertainment Network, the online store that you can access from a PlayStation 3 video game console.

The revamped user interface has full-screen imagery of the entertainment property you’re looking for, like the Resident Evil page above that shows related movies, games, and music, said Michael Aragon, the vice president and general manager of global digital video and music services at Sony, in an interview with GamesBeat.

“When we launched the game service in 2006 and the video service in 2008, the content could be measured in hundreds of titles,” he said. “Now it’s massive amounts of content.

Today, there are 1,600 games, 20,000 pieces of other content, and 100,000 movies and TV shows. With that larger library of media, Sony had to redesign the store so it was more accessible and easier to find new entertainment.

Searches are better now; it takes fewer clicks to hunt down titles with long names.

Sony has not yet updated the user interface so that it runs on the PlayStation Vita or other mobile devices or the PC. But Aragon said those things are likely on the road map for the future.

The underlying architecture has been rebuilt with HTML5, the lingua franca for the web, which will be more easily modified in the future, Aragon said.

“We will see changes in months, not years,” he said.

Sony is working on improving things such as predictive text, which makes it easier to search for content. The navigation flows sideways now, like a carousel.

“Our search is much simpler so you don’t have to pound it out on an onscreen QWERTY keyboard,” Aragon said.