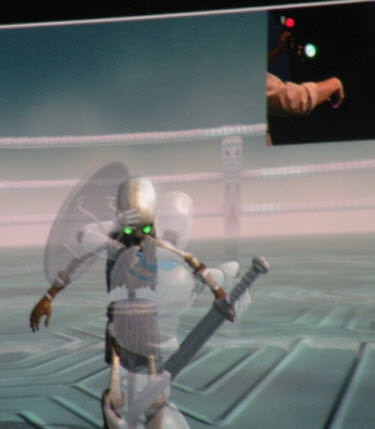 Not to be outdone by Microsoft or Nintendo, Sony is showing off its own futuristic motion-tracking technology today.

Richard Marks, creator of the Sony EyeToy, which enables two-dimensional camera-tracking games, showed off a new version of Sony’s motion-tracking technology today. You hold a wireless handheld controller in your hand, almost like a wand, and it synchronizes with the EyeToy camera, letting you interact with a game much like you can with the Nintendo Wii controller.

The EyeToy debuted with the PlayStation 2 with the earliest public demos in 2002. Marks kept working on the technology but a new version for the PlayStation 3 didn’t really catch on, largely because its two-dimensional tracking meant that it was easily confused by friends on a couch or other movement in the background.

But Marks said that the new technology works with sub-millimeter accuracy, which means you can write names on your TV screen with the technology. You can also do all sorts of body-movements, such as swinging a sword, spraying a paint can, or shooting a gun. Rather than pressing buttons, you use gestures to make things happen.

The trend is clear. All three major console makers see the writing on the wall. Humans are going to interact in a more physical way with video games in the future. While Microsoft showed a video of what it could do yesterday, coupled with a few physical demos, Sony is doing all of its demos live with working prototypes. It remains to be seen who will get the technology to market first. Microsoft is targeting 2010. Sony says it will launch the PlayStation Motion Controller in the spring of 2010.

In my opinion, Microsoft has the more natural technology with Project Natal. It’s measures the movements of your whole body, while the new EyeToy technology tracks a wand’s movements. But it remains to be seen who has a real technology and who has smoke and mirrors. In his remarks, Marks criticized rivals for failing to show much by way of live demonstrations.