Patent filings alone don’t guarantee new products, but there are times when a patent is so specific that something tangible is likely to follow. A newly discovered Sony wireless VR patent strongly suggests that big changes are coming to the next-generation PlayStation VR headset — the latest indication that the company is preparing to push “tethered” headset technology forward, rather than trying a different formula.

From a big-picture perspective, the patent is about removing the wire that connects the VR headset to a PlayStation — a seemingly simple change that would enable VR users to move around a room without tripping over the headset’s cabling. Sony released the original PSVR with a fairly thick cable, but Microsoft ultimately passed on an Xbox One VR headset, citing cabling as a key reason for waiting.

In practice, eliminating the cable isn’t easy at all: It provides power for the headset’s display, transmits all the visual and audio data to the display, and may send head tracking sensor data back to the computer or console as well. Even if you could power the headset with a battery and wirelessly transmit head tracking data in real time, VR uses refresh rates of 75 to 120 updates per second across two screens. With high-resolution displays, that’s way more data than a typical Wi-Fi connection can handle, making next-gen Wi-Fi — or higher-bandwidth 60 Gigahertz “WiGig” — a necessity.

This patent is compelling because it demonstrates that Sony has actively tested current wireless connectivity solutions, and found them lacking. TPCast’s and HTC’s wireless adapters already use 60-gigahertz frequencies to transmit high-bandwidth VR data wirelessly. Instead, Sony’s patent describes a wireless solution that primarily uses 60GHz signals, but carries a backup signal at 5GHz to maintain a stable VR connection at all times.

On paper, the 60GHz signal should have the bandwidth, latency, and reliability to work by itself, but in real-world use of VR headsets, 60GHz signals are more easily obstructed by objects and more directionally dependent than lower-bandwidth 5GHz signals. In the patent, Sony pairs 60GHz WiGig with 5GHz Wi-Fi to guarantee its headset will always get a signal, shifting from higher to lower frequencies (and bandwidth) based on where the user is moving in the room. 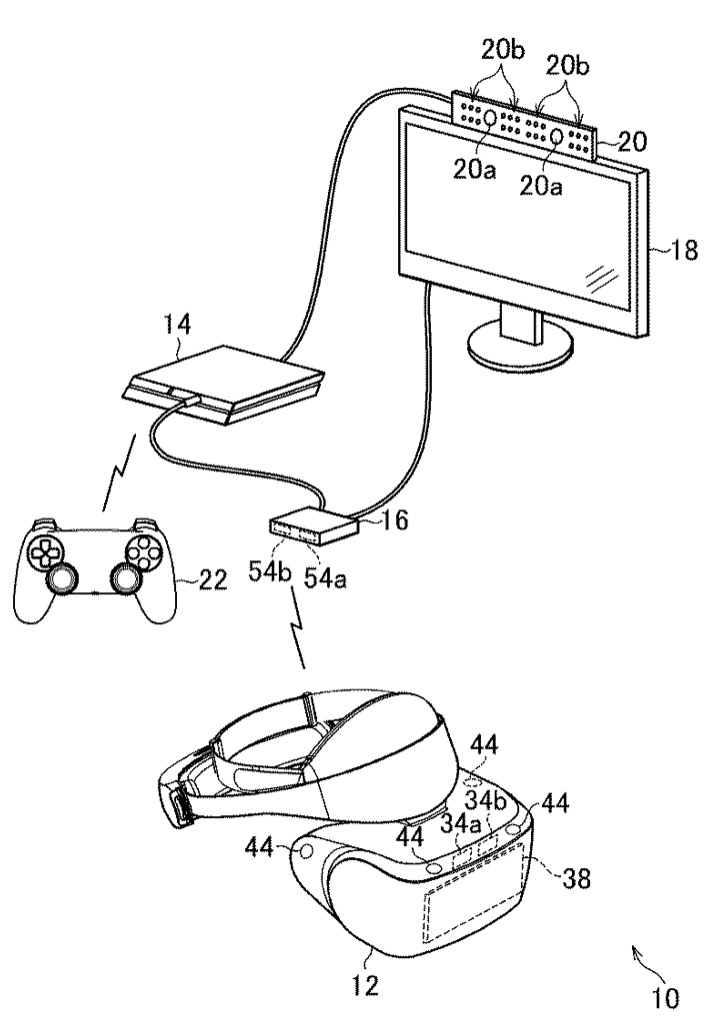 The patent and images suggest that the console will have a breakout box that knows whether the user is in front of the machine or not. If the headset is facing the box, the high-bandwidth 60GHz signal will be used, but when the headset is outside the box’s directional antenna range, it will fall back to 5GHz. In other words, stay within a specific area and you’ll get a flawless experience; move outside of it and your visual quality might be degraded, but you won’t get nauseous.

Sony could have gone with other alternatives, such as an Oculus Quest-style all-in-one headset that didn’t require on-console processing, or a headset with lower screen resolution so that it could stream everything smoothly using a lower-bandwidth wireless signal. The patent isn’t definitive, but it does suggest otherwise.

This isn’t the first piece of evidence that Sony is planning a second-generation PSVR headset with significantly greater capabilities than its predecessor. Last year, Sony-backed Japan Display revealed stunning VR-ready displays with 803PPI and 1,001PPI pixel densities, up from 386PPI on the first PSVR.

But finding the right balance of pricing and performance remains a challenge for Sony. The PSVR’s sales really took off after headsets became available for $200 and great game bundles were $300 and under. Sony has sold well over 3 million PSVRs at this point, leading the VR industry with an estimated 700,000 additional units in the last holiday quarter alone.

Unfortunately, TPCast’s and HTC’s wireless adapters each cost around $300, including 60GHz computer and headset transmitters, battery packs, and related accessories. While Sony could shave off some of that expense by engineering the hardware directly into a next-generation PSVR headset, wireless hardware is likely to translate into a higher starting price for PSVR2 — one that price-sensitive PlayStation consumers may not be willing to accept.