With the PlayStation 4, Sony has to capture its lost glory. In the days of the original PlayStation and PlayStation 2, the Japanese company ruled. But with the PS3, Sony made some arrogant and costly mistakes, starting with an opening price of $600. 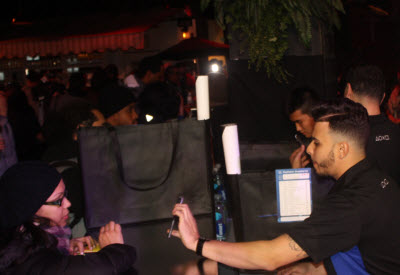 Above: Sony starts selling the PS4 at the Standard

With the $400 PS4, the company is avoiding those mistakes and starting over at its roots, cementing a solid relationship with the gamers who will make or break the system as it competes against Microsoft’s upcoming Xbox One launch on Nov. 22.

Jon Koller, vice president of marketing, is part of a veteran team of executives who have been through the console wars before and devised the strategy for the new launch.

We caught up with Koller just before Thursday night’s launch of the PS4. Here’s an edited transcript of our interview.

GamesBeat: So you’re launching the PlayStation 4 tonight. How’s that feel?

Jon Koller: It feels great. We talk a lot about it being the finish line of development, but really it’s the beginning. Now the platform starts, and we start to engage with our gamers in a way that we never have before, with games that have never been seen. It’s an exciting moment.

GB: We’re in the Standard Hotel in New York. Tell us a little about what’s happening downstairs.

Koller: Downstairs there’s a very lucky group in line – in very cold New York weather, I should note – waiting for the first PS4 to be sold. We have a line of maybe 500 people that have been waiting out there for about a day to get theirs. It just shows the passion that the PlayStation fan has. It’s palpable. It’s what makes us love doing what we do.

We decided, this time, to have an event that was about gaming, really dedicated – just like we are – by gamers for gamers. The whole hotel is rented out. The PR team’s done a great job of having each floor be dedicated to one of the launch games and taking the media through that. 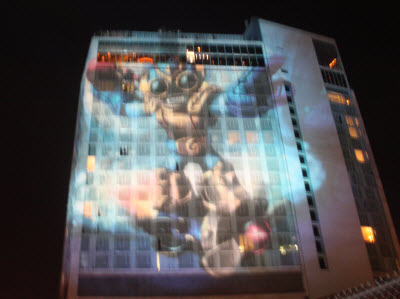 Above: Ratchet character on the Standard

GB: Tell me about the behind-the-scenes setup you’ve had to do for this. It’s pretty elaborate. Did you have some discussions about what kind of impact you want to make with the event for this, compared to last time around?

Koller: My contribution to that was the Spike TV component, which is something I’ve been wanting to do for a long time. I respect what EA’s done with Madden and what some of the other groups have done on these shows. We wanted to make it what it is, a cultural touchstone. This doesn’t happen very often. We wanted to celebrate that.

On the PR side, this is awesome. I don’t know how they found a hotel that looks like a PS4, but they did. The structure of it is great, because of the way the line can work. There’s a bunch of rabid, passionate fans out there. We needed to make this something that was equal to the cultural touchstone that it is.

GB: Twitch is live streaming it as well. That didn’t happen last time.

Koller: Yeah, you were there, weren’t you, in San Francisco? There was an L.A. celebrity party too. But we’re doing things a little differently this time. It’s much more about the games.

The live stream is always interesting. You watch that and hear people and see the interaction of the community. This is something that’s felt nationally. We’re seeing a lot of interaction on social networks right now. There are people taking off work to be able to play tomorrow. That was one of the things about launching on a Friday. We don’t want to encourage anyone to miss work, but if you want to take a three-day weekend with your PlayStation 4, go for it. 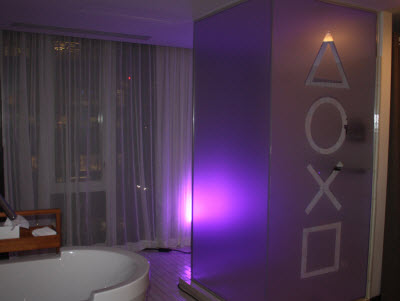 Above: Sony decorated the shower stalls at the Standard in PS symbols.

GB: How do you feel about the launch in general?

Koller: Really positive. It’s always great to get out of the office and interact with the fans and see how much love they have for the brand. It makes everyone feel good. I try to bring my team. You have to feel this, feel how great it is.

The launch overall, just in business terms, we feel great about it. The pre-orders are through the roof. The demand is huge. Of the five platform launches we’ve had, this is the best game lineup. It reminds me a lot of the PS2 launch, when we had such pent-up demand – “When is the PS2 coming?” The same thing is happening here.

GB: It seems like every indication out there is that there’s plentiful supply this time, compared to past launches.

Koller: You always look at it relative to demand. There’s adequate supply for those who want one, but I think they’re going to want to make sure they get in line tonight. Or if they see a unit at retail, they’ll want to snap that up and not wait. The sense is that the demand will be very strong through the holidays.

GB: I’ve heard people like John Riccitiello say that the pre-order indications suggest that these new machines will sell more in five months than they sold in 14 months the last time. Based on pre-orders, based on what you’ve heard from people, do you feel like we’re just not in as extreme a shortage?

Koller: Yeah. You also look at the way the business has changed. We went out at $599 with the PS3. Xbox was out there for a year. They were $100 cheaper at that time when we launched. But still, an expensive proposition. This time around we’re at $399. There’s much more opportunity, from a spending perspective, for people to be able to come in and buy a couple of games with that. We maybe didn’t have that flexibility last time. I think John and other analysts are right. The demand for this will be sustained for a longer period of time at a real high level than we’ve seen in the past. We see it in a lot of our quantitative modeling – a lot of pent-up demand, a lot of passion to get into this next generation.

GB: What’s better this time, in the box?

Koller: Well, you start with the graphics. We talk a lot about it being the price of entry, but it’s really not. It’s theatrical. It’s become much more of that dream I think a lot of people have had in this industry for years, to become in line with what you see in a Michael Bay movie, an Avatar, where it’s so immersive and engaging. It makes you want to be part of that environment.

What’s behind the hood is an unbelievable social component. Some of the engineers in Japan like to talk about “playing with like-minded souls.” It’s about playing with people who are similar gamers, who have similar passions, similar loves for the types of experience that you want. You’re able to share your experiences with them, whether it’s through live streaming or shared content. It’s about being able to live in different environments and different worlds, like a Destiny, that evolve as you play them, where the developers give the tools to the community and it ends up being something much different than what had originally been envisioned. 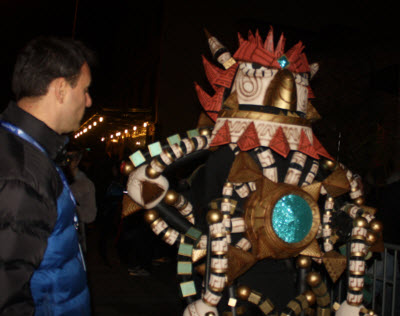 Above: Knack at Sony PS4 launch

GB: What are you noticing about some of these people who’ve shown up here?

Koller: They love PlayStation. I think we heard the chants. They’re very cold, but very happy that they’re going to go home at midnight—If you look at any of the sites, or look on Twitter tonight, you see people saying, “I’m 15th in line. I can’t wait. At 12:30 I’ll be at home playing this. I’ll let you know how it is.” That’s what we want to see. We want people to be out there. If you want to stay up all night, we’ve got the coffee. Just be ready to share your content.

GB: Does it feel good to be a week ahead of the Xbox One?

Koller: I don’t think the week matters much. In the longer term it’s about the proposition. I don’t know if we’ve been at a point in gaming where there’s been a bigger difference between the two main competitors. They’ve been very public with their strategy and we’ve been very public with the opportunity we see in standing for gamers and for games. That’s born of a device created by Mark Cerny, a gamer himself, and going to game developers to find out what would make the best gaming device ever made. The best graphics and the best overall experience. That’s most important to us. 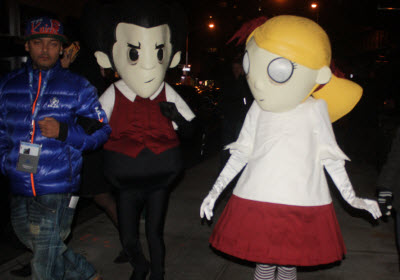 Above: Sony characters at PS4 launch.

GB: Does the lineup have something for everyone?

Koller: Yeah, and not only the launch lineup. We had two goals when we set out to make the PlayStation 4. The first was to solve the immediacy issue that pervades most of the gaming industry. Make it much quicker to get into content.

The second one was accessibility. We wanted to make it more accessible for all types of gamers. We as an industry all learned a lesson from what the Wii has done, what mobile has done, what tablet’s done, what Steam has done. These are models that you’d think of as non-traditional, but they’ve come in and captured other types of gamers that the traditional industry hadn’t in many years.

We’ve designed the PS4 to be more cooperative with mobile and tablet. We’ve talked about it being additive to the last generation, and it has been, but in this case we decided that the way people have been utilizing mobile and tablet has changed to a point where being able to tie in your experiences that you have on your mobile device to what you’re doing on your PlayStation 4 — that big theatrical experience in your living room – is important.

We’ve tried to push a diverse range of games. You look at a game like Knack, which is a Cerny game, but it’s much different from what you’d see at the launch of many platforms, many systems. It’s something that I think many types of gamers can enjoy. Our goal is to have everything from a strong Call of Duty to a strong Knack type of experience. We want all kinds.

GB: Do you think some differences are going to turn out to matter a lot? Things like the Call of Duty resolution [which is better at 1080p on the PS4 compared to 720p on the Xbox One]?

Koller: Those kinds of things will matter, and matter quite a bit to certain types of people. When we look at the market, there’s a connoisseur of gaming – the kind of person who’s in line out there right now, who absolutely cares about that. Because we’ve built the system to be the most technologically proficient, that’s going to be what a lot of people see when they look at the systems next to each other.