SAN FRANCISCO — Sony introduced a new prototype of its VR headset earlier this week, and while the company is going to take the next year to add a few improvements to the final consumer release, it could sell what it has now.

Project Morpheus’s latest revision comes with a new screen, improved motion tracking, and a more comfortable design. All of that, combined with some other nifty new features, makes this version of the headset one of the best examples of virtual reality yet. It’s also still promising the easiest implementation of VR as well, as Sony bills it as being plug-and-play for anyone with a PlayStation 4.

The consumer version launches in the first half of 2016, and I’m sure some of those inevitable improvements will make the final product even more impressive, but the biggest obstacle to launching a virtual-reality device on the market at this point is the software.

And this is probably what’s holding Sony back from releasing Morpheus this year.

Looking at the Morpheus hardware, you can see that Sony decided to flex its design muscles. As far as TVs that you strap to your face go, this is probably the best-looking one yet. It’s sleek and smooth. It has bright glowing lights that make it look futuristic while also enabling the PS4 to track your motion.

When you have it on, you can easily slide the screen up and away from your eyes to get a look at your real surroundings without having to take the whole thing off. It’s a smart solution that Oculus’s and Valve’s partners should steal.

The best part of Morpheus’s design is definitely the weight distribution.

Unlike the Oculus Rift, Sony has figured out how to spread all the heft of the hardware to the top of your head. It’s like wearing a hat or helmet rather than a weight that’s dragging your face down.

I was only in the Morpheus for about 10 to 15 minutes, but — in that time — it didn’t creates any comfort problems for me. Maybe more than anything else, that’s what convinced me Sony has something that it could put on store shelves.

Morpheus now has a display that is capable of updating 120 times every second. The PS4 is capable of outputting that, according to Sony, and that means we should get much less motion blur and image-bleeding when we move our heads.

This was definitely my experience.

One of the demos I played was running natively at 120 frames per second. In the game, little robots jumped around the screen and zipped around my field of view, and the display had no problem keeping up with me whipping my head back and forth. 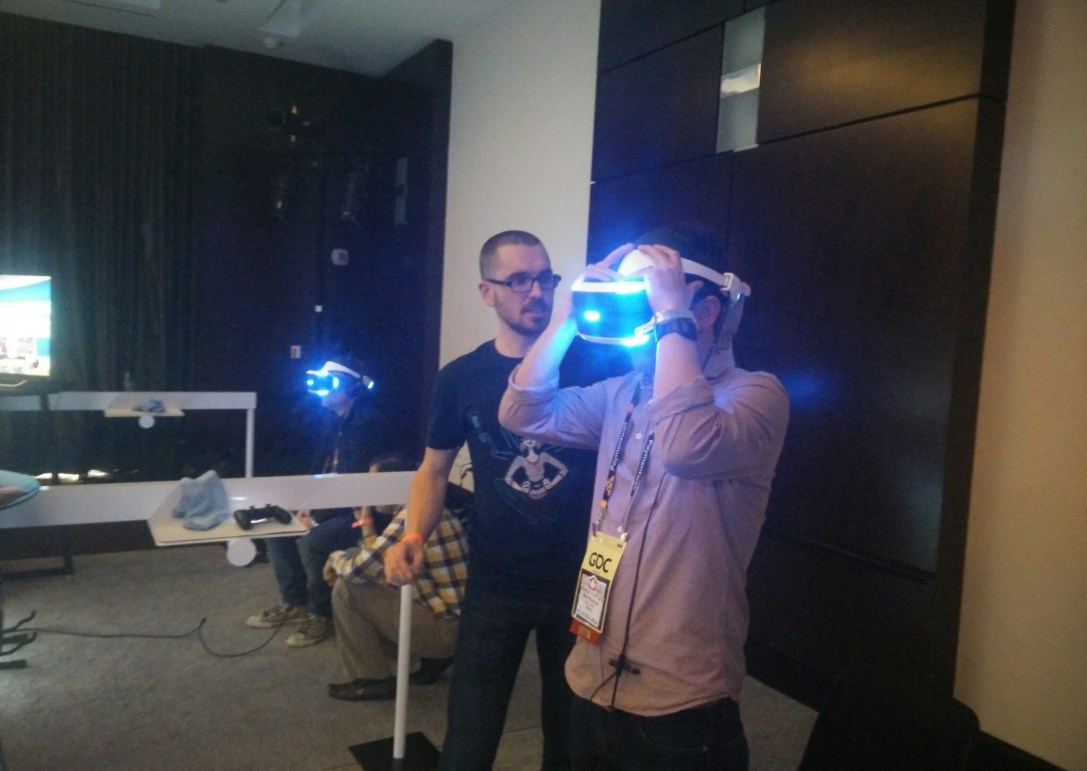 Above: Donning the headset.

The screen is also OLED with a 1920-by-1080 pixel arrangement. Sony points out that it is actually 1920xRGBx1080, which means that each pixel has a red, blue, and green subpixel — as opposed to something like a PenTile display that doubles up on the red and green subpixels.

All of this is just a lot of jargon to say that the screen is nice.

But you should still expect to see the screen-door effect when using this system. I could see the pixels, and that was distracting at first — but they disappeared quickly as I stopped playing.

Even though the 1080p display is passable, I hope that Sony spends the next year trying to fit a 4K screen into its VR device.

Virtual reality has a had a busy week. Yesterday, Oculus VR’s John Carmack announced his team will release the consumer version of the mobile Samsung device Gear VR before the end of the year. Valve and HTC said they will launch the Vive, the first product that is part of Steam VR, this year as well.

And both of those projects have an advantage that will enable them to offer a consumer-quality experience before 2016: games.

While Sony announced a lineup in the works for Morpheus, studios have spent a while now producing PC-compatible games for Oculus Rift that will just work on Vive. And since Gear VR is a mobile experience and — as Carmack pointed out — mobile developers often turn around games in a few months.

Sony, with its premium PlayStation brand, doesn’t have that luxury. Its audience expects high-quality experiences.

Now, nothing about what Sony showed the assembled press and developers at GDC was of a “low quality.” It was all just early on and material that no one could sell for $60. 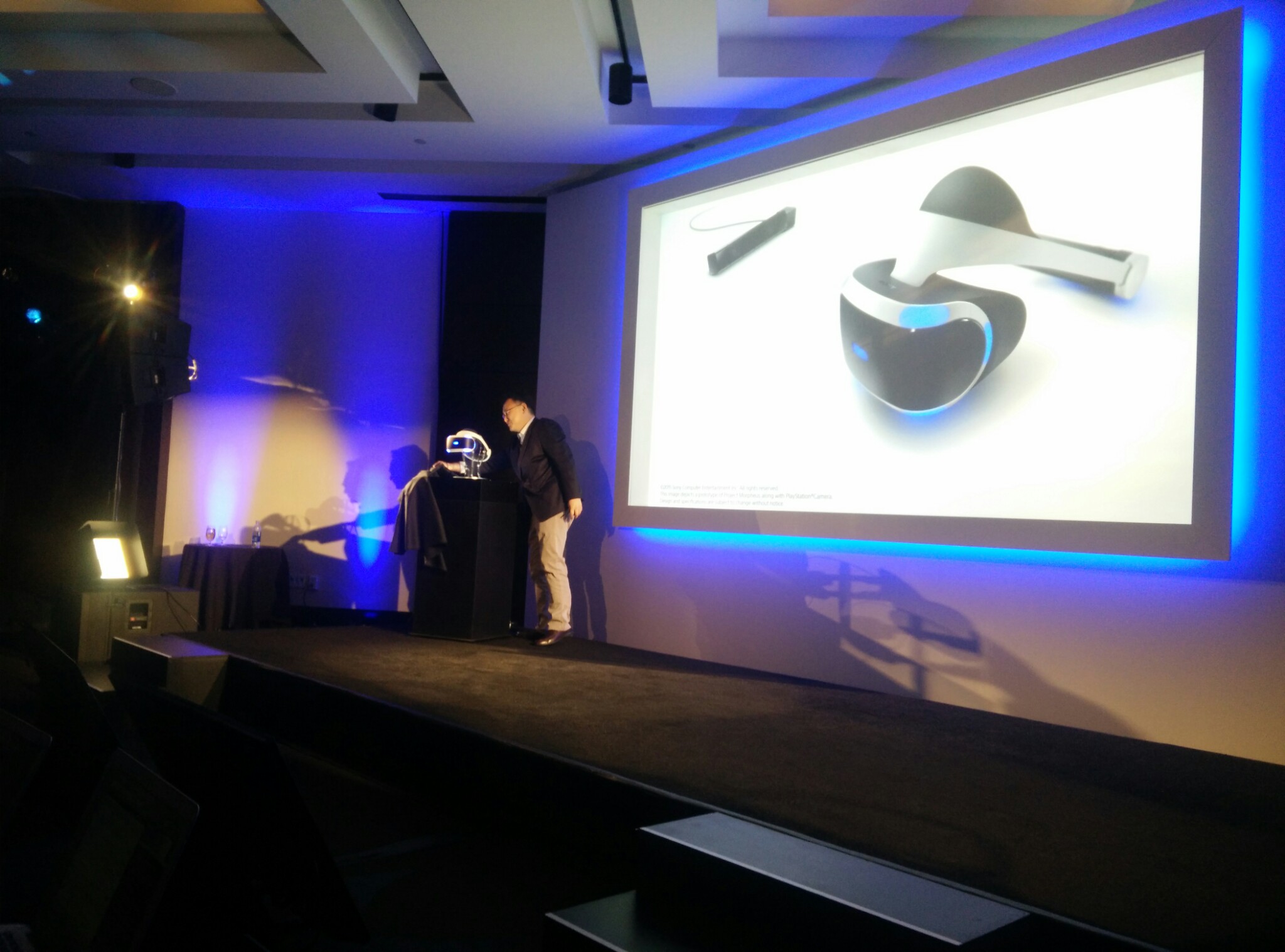 The demonstration I went through featured a bunch of robots that jumped out of my virtual controller and who I could interact with slightly. I could make them dance or shine a light on them.

If that sounds familiar, it’s because it is similar to the demo that comes with the PS4 to show off the capabilities of the Eye camera attachment.

The second demo had the same robots playing around in a massive dollhouse-type structure. As I looked at individual characters, they would do interesting or funny things. It was great demonstration of how immersive VR can make you feel — but it’s a long way away from a final product. And Sony is fully aware of that.

Some of the other demos, which I didn’t try, had you getting into a gun fight and picking stuff up using the PS Move remotes. That’s the beginning of something that Sony can turn into a retail game, and now — thanks to its promise of a 2016 release date — it has around a year to turn these seeds of ideas into fully grown experiences.