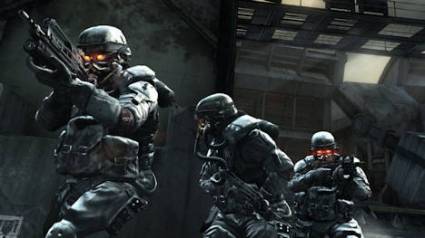 Just when we thought the Nintendo Wii had won the video game console war, along comes Sony’s Killzone 2.

In 2005, Sony whet our appetite for the PlayStation 3 (which debuted in 2006, without Killzone 2) by showing off a demo of a then-distant game. It was a beautiful cinematic shot of the opening scene of the sci-fi game, with outstanding graphics and grueling first-person combat. It was so good that the game press launched a frenzied debate over whether the whole demo was just a fake, and many people figured the PS 3 would never be able to reproduce such photo-realistic images.

Fast-forward to 2009, and Killzone 2 has finally been released. I’ve spent some late evenings playing the single-player campaign all the way through.

My verdict: it lives up to the hype. I think it may be one of the best-looking games and most intense gaming experiences we’ll see in this generation of game consoles. I’ve played a few outstanding games in the past few months: Microsoft/Epic’s Gears of War 2 for the Xbox 360, Resistance 2 by Insomniac for the PS 3, and Call of Duty: World at War for a variety of platforms. But this game is the best-looking and the most fun. 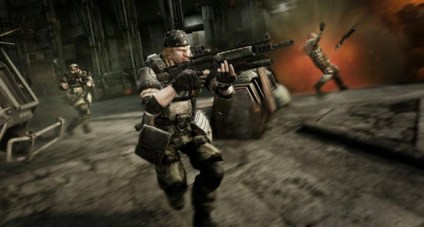 I realize my vote is somewhat irrelevant. Swarms of gamers are buying the Wii, and hardcore games such as Killzone 2 can’t generate the same number of fans as broader, mass-market titles for the Wii. Outstanding graphics no longer seem to matter as much to fans as they once did. But this game has scored six editor’s choice awards and has a ranking of 92 out of 100 on Metacritic, which aggregates game review scores. In my view, Killzone 2 even gives Microsoft/Bungie’s Halo franchise a run for its money.

Fans who can stomach the violent first-person action and foul language of this mature-rated title shouldn’t miss it. From the opening scene of the game where the camera pulls back from the bloodshot eye of Scholar Visari, the emperor of the enemy Helghast race, the visuals are stunning. The game routinely shows off amazing visual effects, such as little dust storms that swirl around an outpost and obscure your view of the action. Wind blows back curtains from windows. Bullets pierce thin metal walls, sending out sparks and killing those hiding behind the barriers. The sound is excellent, and the screams of the Helghast through their muffled helmets is quite haunting. 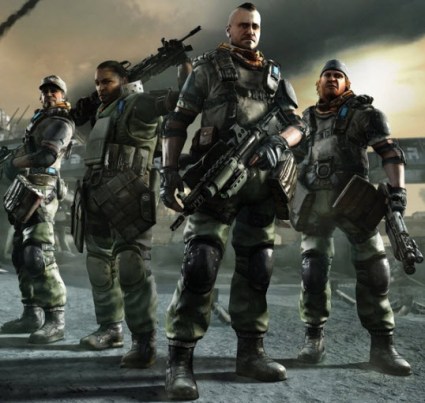 There are many moments when it feels like you’re in movie. This blurring of film and game animation is still the Holy Grail of realistic graphics, and Killzone 2 is far better at this than any game I’ve seen. I’ve played so many first-person shooters, but Killzone 2 reminds me that I’m still not tired of the genre.

The plot picks up where the original Killzone (launched for the PlayStation 2 in 2004) and Killzone: Liberation for the PlayStation Portable left off. In Killzone, the Helghast empire invaded a planet Vetka but the Interplanetary Strategic Alliance beat them off. Two years later, the ISA has now taken the battle to Helghan, the home planet of the Helghast. It is a stark gray and dying industrial world. You battle it out in oil refineries, on bridges, and in dank scenery that reminded me of the totalitarian environment of Valve’s classic game Half-Life 2.

The fighting is inspired by 20th century combat, particularly the confusion-filled combat scenes of movies like Black Hawk Down. It’s intense and scary as you try to escape a hail of bullets and return fire, sometimes blindly. Quite often you find yourself surrounded and getting pounded by bullets, with smoke so thick you have no idea what direction the enemies are coming from. The Helghast are clad in black armor but have haunting orange-lit eyes that are so bright they’re easy to target from afar.

Your job is to play Tomas “Sev” Sevchenko, a sergeant in charge of Alpha squad in a special forces unit. You partner with squad mate Rico as you proceed from firefight to firefight. Your weapons include grenade launchers, submachine guns, sniper rifles, missile launchers, pistols, shotguns and knives. There are a couple of levels where you climb into tanks and blast away with superior firepower. But most of the time you’re pretty evenly matched against the legions of Helghast soldiers, who you have to outflank and mow down. You have to pursue the emperor Visari and deal with his military commander, Radec, who resembles Darth Vader. 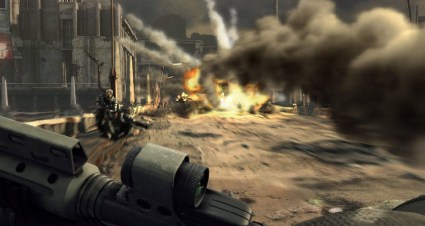 The fighting is visceral. If you snipe at the enemy from afar, odds are good that someone will sneak up on you and knife you. It isn’t easy to move your aim quickly from one target to the next. And the long-range aim of some weapons is pretty sorry. So quite often it pays off to just barge and charge. You send out a spray of bullets at the enemy soldiers and hope that you’ll take them down as you adjust your aim. Of course, the fire is so deadly that it pays to hide behind cover most of the time, pick off as many enemies as you can, and then charge with guns blazing.

The environments are destructible. When you hide from a rocket-firing helicopter on the top of a building, the cover afforded by the concrete starts to disappear as the rockets slam into the building. It’s not so fun when you’re on the receiving end, dodging and hiding. But it really is satisfying to wipe out waves of enemies as you stand at a mounted machine gun and blast everything until your gun overheats.

One of the forces of nature you have to deal with is the wind. When you’re fighting on top of a moving train, the wind blows back any grenades that you throw, and you can’t move as fast against the wind. It forces you to adjust your tactics. That’s a level of realism that most other games just don’t have.

This game also has what has now become a standard feature in shooting games: flamethrowers. It used to be too difficult to include such weapons, because the animations of flames and smoke were just too hard to do. But the PS 3 can handle these animations with ease. Another highly satisfying, though perhaps too powerful, weapon is the lightning gun that zaps multiple enemies in a blast.

There are flaws, though. Killzone 2 taxes the PS 3’s Cell microprocessor and its Nvidia graphics chip to the max. Most of the time, your companions and enemies behave in a smart way. But there are times when they get stuck and look like robots or do something stupid that ruins the illusion of artificial intelligence. It reminds me a little of the original Halo, which occasionally slowed down and forced you to sit through a “loading” screen in the middle of the action.

Ultimately, the game is missing some of the outstanding writing, humor and character development that make other games — such as Gears of War and Halo — more emotionally charged, film-like masterpieces. 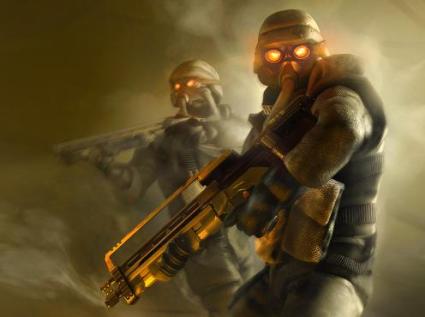 The multiplayer combat lets you face off in battles with as many as 32 players online. As with the ground-breaking Call of Duty 4: Modern Warfare, you win badges and level up with promotions the more you fight. I suspect that multiplayer could keep me busy for months, if I had the time to spare. Sony has had to patch the game, and there have been complaints about performance, but multiplayer is likely to keep this game going for a long time.

I have to hand it to the game developer, Guerilla Games, which spent years getting this title into great shape. But I wonder what the costs were. Killzone 2 is the best game to come out for the PS 3. It stands in utter contrast to Flower, the downloadable PS 3 game for the PlayStation Network that got a glowing review from me. If Flower showed what could be done without violence or words, Killzone 2 shows the pinnacle of what you can achieve when you immerse the gamer in a blood-soaked landscape.

Sony’s got some other big games in the pipeline, like God of War III and MAG. Indeed, I hope some of those games are even better, since it will otherwise be a long wait for the next generation of games.

Will 2009 be the year of the PlayStation 3? Microsoft and Nintendo have clearly been put on the defensive. But these big games on Sony’s platform may be too late to affect the outcome of the console war. Nintendo has outsold both Microsoft and Sony combined. Developers are shifting resources to the Wii, since that’s where the biggest potential sales are.

Still Killzone 2 has done its job. It took me away from the Xbox 360 and the Wii, if only for a couple of weeks. It’s a great game, but I don’t expect it to turn the tide on its own.

For more on the gaming market, please check out our GamesBeat 09 conference on March 24.