South Korea’s PC online game market is expected to grow from $2.83 billion to $3.5 billion by 2018, but it won’t be easy for new entrants to dislodge the established franchises of NCsoft, Nexon, and Electronic Arts.

A report from market researcher IHS shows that South Korea now has the second-largest market for online multiplayer PC games, with China in the top spot. NCsoft’s Lineage rules the market; although the massively multiplayer online role-playing game released in 1998, it still generated $281 million in revenues last year. Like in China, Korean competitive online gaming has become so popular that it’s like a major televised sport.

After a 4 percent dip in 2012, the PC online gaming market in South Korea grew 8 percent in 2013. The 2012 decline provoked fears that the PC market was saturated as consumers turned to mobile games. Most Korean PC game companies have accordingly diverted their resources to high-growth opportunities like mobile games and exports to China.

“Most growth came from a collection of established franchises some of which have been around for nearly a decade and one that launched way back in 1998,” IHS said. “New games released during the year failed to break the stranglehold of these biggest titles underlining the entrenched nature of the market. With growth being driven from these established games it is perhaps no surprise that it was relatively suppressed at 8 percent. In contrast the mobile and tablet games market grew over 250 percent in 2013 and was worth over $1 billion for the first time.”

After Lineage, the No. 2 game was Nexon’s Sudden Attack, with $208 million in spending last year. That debuted in 2005 and is a free-to-play title that makes money off microtransactions. Other top titles were EA’s FIFA Online 3 (which Nexon operates) and Riot Games’ League of Legends.

IHS expects the Korean PC online game market to grow at a compound annual growth rate of 3.7 percent, hitting $3.39 billion in 2018. The question is to what extent mobile and tablet games will disrupt the market. 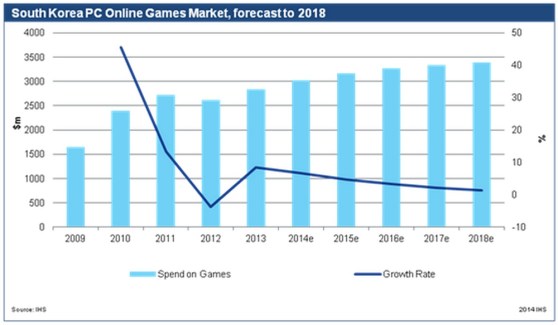 Above: South Korea’s mobile game market is on the rise, but PC games have flattened.