The long-running Comedy Central show took a skewering look at free-to-play mobile games in its most recent episode last night. The plot had gaming executives trying to convince fictional Canadian superstars Terrence and Phillip to license their brand for a “freemium” game. The pair want to make sure anything with their name on it is fun, but the developers explain that they’ll make a lot more if they make it “barely fun.” It’s very obvious that South Park creators Trey Parker and Matt Stone have no love for free-to-play games — this is despite the $16 billion that consumers spent on mobile games last year.

Check out a clip where the gaming execs tell Terrence and Phillip why they need to make the game boring:

That loop perfectly describes The Simpsons and Family Guy games on mobile. The Simpsons: Tapped Out and Family Guy: The Quest for Stuff are two of the highest-grossing mobile games in the world, and both use gameplay loops that are all about waiting for stuff.

If you need further evidence that South Park is talking about The Simpsons and Family Guy games, just take a look at how the fictitious Terrence and Phillip app resembles Family Guy: The Quest for Stuff: 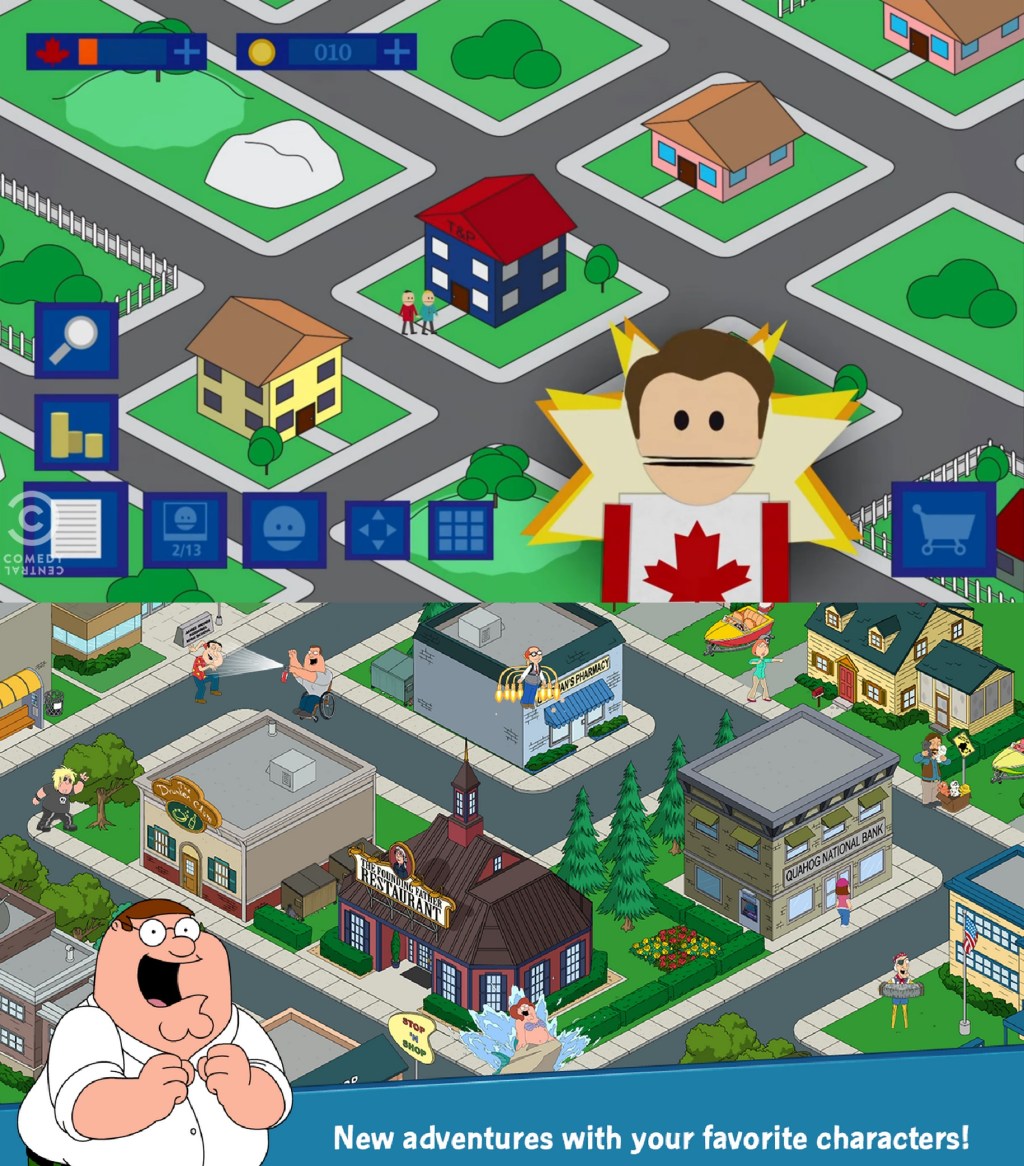 Above: On top is the fake Terrence and Phillip game. On bottom is the real “Family Guy” mobile app that you can get now.

And South Park is right about free-to-play games. In the episode, Canada’s minister for mobile games explains that if developers make the games “truly fun” then players would have no reason to pay for microtransactions. It goes to the heart of this business model: the incentive for free-to-play developers isn’t to figure out ways to thrill customers — it’s to figure out ways to put players into situations where they want to spend more money.

This creates games that play you as much as you’re playing them.

Take the Japanese megahit Puzzle & Dragons for example. Ostensibly, this is a colorful and simple puzzle game with role-playing elements. At its core is a Pokémon-style monster-collection gameplay loop where players want to keep grinding to find and improve their dragons. Developper GungHo Online knows how to put players into situations that create “fun pain” where the player is uncomfortable and often finds that spending money is the best way to relief that discomfort.

In Puzzle & Dragons, players go through dungeons and collect all kinds of awesome loot. You have the stuff and it’s in your bag, but you need to get out of the dungeon first or else you’ll lose all that stuff. So the game typically throws a very tough boss in front of the exit. If your character dies, all that loot is lost … unless you pay a dollar.

“To the brain, this is not just a loss of time,” game designer Ramin Shokrizade wrote in a blog on Gamasutra last June. “If I spend an hour writing a paper and then something happens and my writing gets erased, this is much more painful to me than the loss of an hour. The same type of achievement loss is in effect in [Puzzle & Dragons]. This technique alone is effective enough to make consumers of any brain-development level spend money.”

Another example of free-to-play developers trying to use players’ brains against them is the alternative in-game currencies. South Parks’ “prince of Canada” says it himself: You use fake money so that players don’t realize they are spending their actual cash.

“If real money was used — and no successful game developer does this — then the consumer would see their money going down as they play and become apprehensive,” writes Shokrizade. “This gives the consumer more opportunities to think and will reduce revenues.”

When it comes to video games, Parker and Stone speak from a place of authority. They are obviously huge gamers based on the several episodes they’ve done on the topic, but they’ve also had their hand in the creation of several South Park gaming adaptations. The biggest recent example is South Park: The Stick of Truth role-playing game from publisher Ubisoft and developer Obsidian Entertainment.

Parker and Stone worked closely with Obsidian to get the look, feel, and writing with The Stick of Truth correct. While that game probably didn’t make the South Park creators as much money as a free-to-play game would, The Stick of Truth earned a very warm reception from gamers and critics (including GamesBeat’s own glowing review).