South Park: The Stick of Truth was one of the best licensed games I’ve ever played. The turn-based role-playing adventure aptly captures the look and humor of the cartoon. I can say the same for its sequel, The Fractured but Whole, which comes out on October 17 for PlayStation 4, Xbox One, and PC. I played the game on my PlayStation 4 Pro.

But this superhero-themed follow-up isn’t just a rerun. Ubisoft has added some welcome complexity to South Park’s battles that make The Fractured but Whole a more satisfying game. 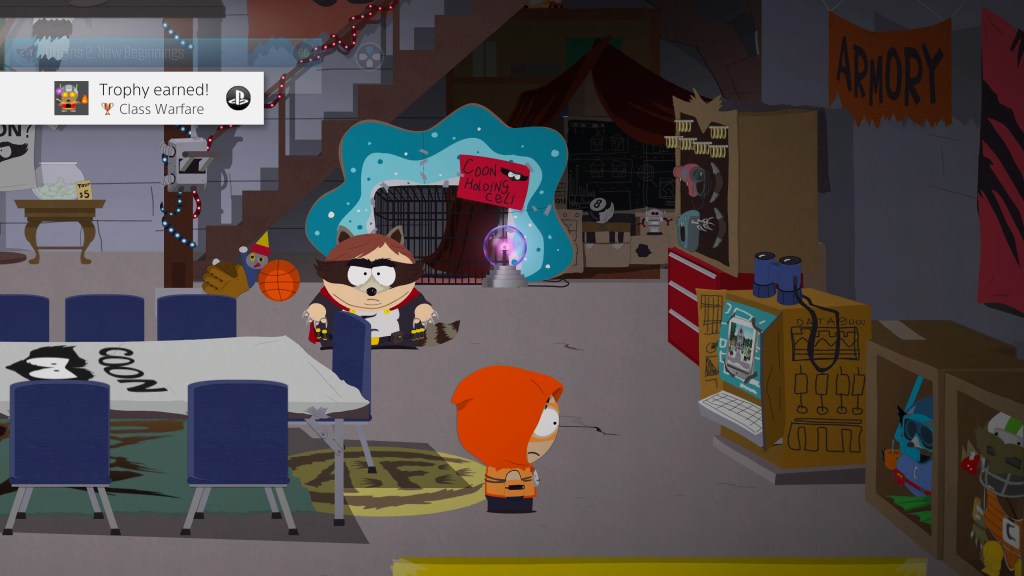 If you’re a fan of South Park, like I am, you’ll love having another opportunity to play through an interactive episode. That’s what The Fractured but Whole is. It looks exactly like the cartoon. It has the same writing touches and crude (but hilarious) jokes.

And that feel isn’t just limited to cutscenes. Funny moments, references, and call-backs can happen at any time, even during battles or when you’re collecting hidden items across the town (like the nostalgia-loving member berries or the high-brow Japanese art form of Yaoi).

The Stick of Truth had that whole “replicate the show” thing going for it, too. But its combat is a bit simple: turn-based stuff with timed-button inputs that helped to deal extra damage or block enemy hits. You have just one friend fighting alongside you at a time, but you could change them out for another during combat.

The Fractured but Whole is more complex. Fights take place on a grid, so you must plan your forces’ movement. Placement matters for aiming your attacks (which come in a lot of varieties that fire in a bunch of different directions) and avoiding enemy moves. You also have four characters out at a time.

It has a lot more going on than The Stick of Truth did, and it makes for more interesting battles. You don’t feel like you’re on autopilot, and the Fractured but Whole keeps introducing new characters, abilities, and moves that give you more options in combat. 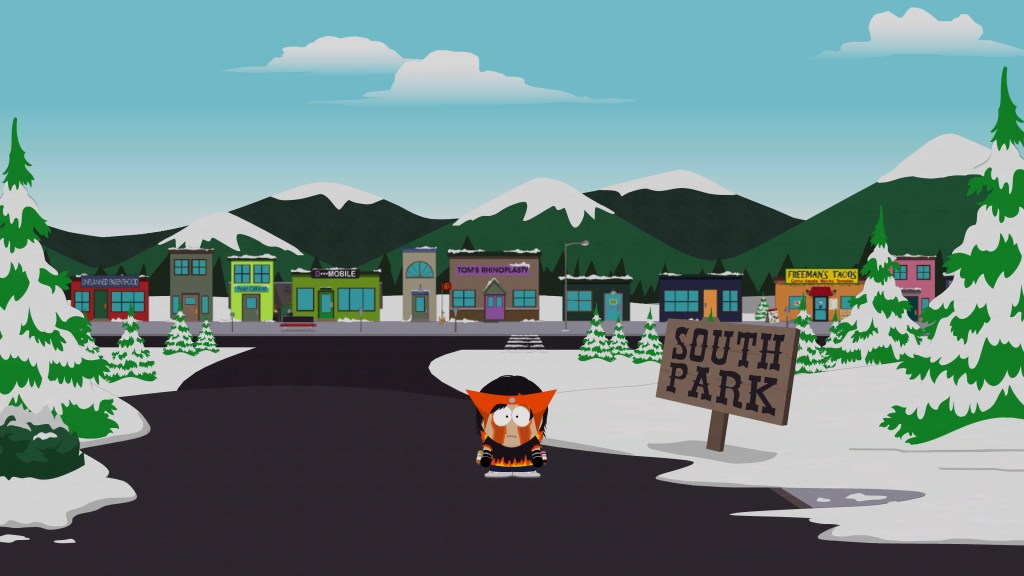 Above: You can explore much of the town.

The Stick of Truth has the kids playing wizards and warriors with a make-believe fantasy game. Now the South Park kids trade in their crowns and swords for tights and lasers. The superhero theme translates well to South Park’s gaming needs, giving (mostly) ordinary children access to powers that make combat interesting.

It’s also a great source of humor. Fans of the show will recognize these alter egos from South Park‘s superhero episodes. This time, the kids have split into two separate teams after a fight over the movie and TV plans for their billion dollar media franchise. I’m not saying that I’m above enjoying a superhero movie anymore, but it is nice to see Marvel and DC be the butt of so many jokes.

You play as the same new kid character from The Stick of Truth. You have much more room to customize yourself in this game. Aside from choosing the look of your kid, you get to pick your powers and your costume. You don’t have many clothing options at first, but you discover more outfits as you explore the town. Trying on different combinations of super hero clothes is almost as much fun as fighting all the sixth graders and hobos that try to kill you. 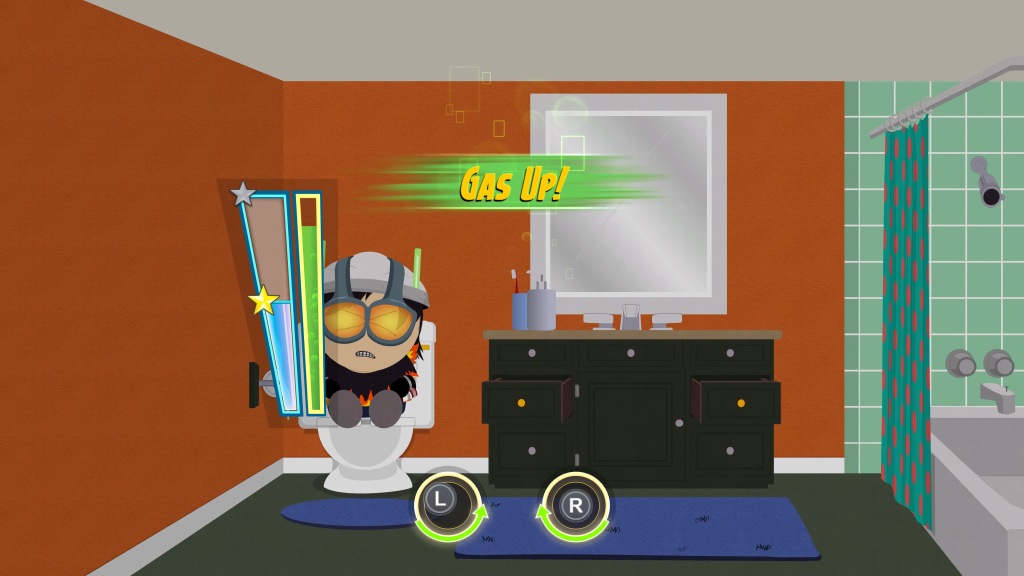 Above: Super heroes can take super-poos.

The novelty isn’t as novel

I’ve mentioned how The Fractured but Whole feels just like an episode of the show. And I’ve also said that its predecessor, The Stick of Truth, did the same. It’s still impressive, but some of the wow factor is gone.

This is also true for the town itself. I forgave some of The Stick of Truth’s simple combat because it was so cool to get to walk around a digital South Park. You can do that again in The Fractured but Whole, but you are doing it … well, again.

As your exploring, you’ll come across certain areas or items you can’t reach. By playing through the main campaign, you’ll access new powers that can help you clear obstacles and solve puzzles. You can fart in a kid’s face to give him momentary super-strength so he can knock a heavy object over.

These solutions are clever the first time, but you’ll be using these abilities a lot. I’m not even sure if you can call them puzzles. You’ll walk into a room and see a giant object blocking your path. Or you’ll see a wind fan, indicating that you can use another kid’s Fartkour (it’s parkour but with farting) to reach a high place. You’re doing these things a lot, and each time you have to watch the same animations and hear the same voice lines. It gets monotonous.

Some puzzles get more interesting when you use your time-warping fart powers (yes, farting is a big theme), but most of them just have you using your contextual buddy skills. 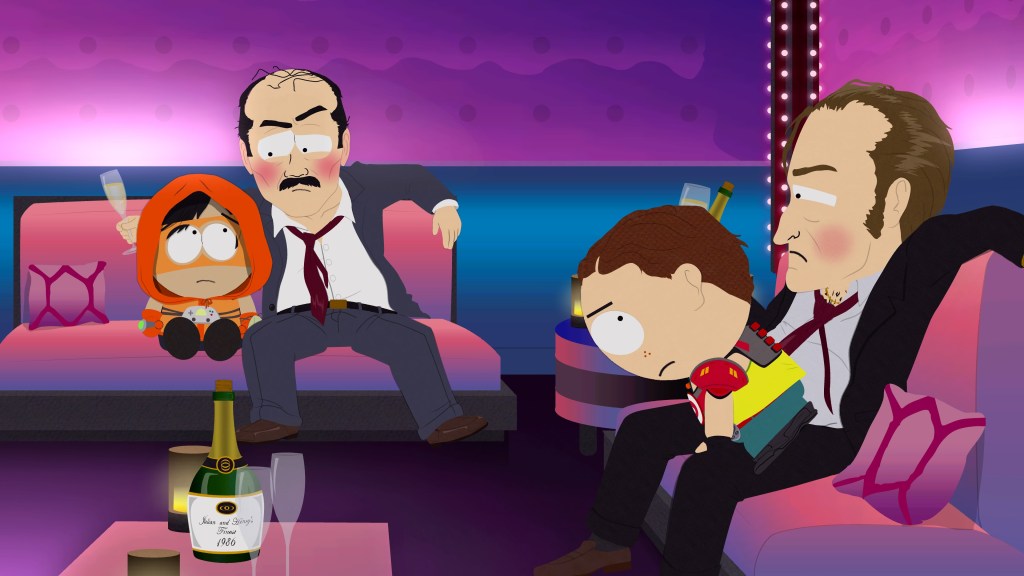 Above: The Fractured but Whole gets inappropriate the way you’d want it to.

The Fractured but Whole doesn’t feel as fresh as The Stick of Truth, which is the curse of many sequels. But South Park is such a long-running and creative show that it can easily support more games, and the super hero theme is a great fit.

But the grid-based combat adds the layer of complexity that The Fractured but Whole needs to stand out from its excellent predecessor. You’ll still need to be a fan of the show to get the most of this. But if you are a South Park aficionado, The Fractured but Whole is another hilarious and fun game that captures the spirit of series.

Disclaimer: South Park: Fractured but Whole writer Demian Linn was a cofounder of Bitmob, a game-writing site and community that VentureBeat acquired in 2012. Our coverage remains objective.

South Park: The Fractured but Whole comes out on October 17 for PlayStation 4, Xbox One, and PC. The publisher provided us a PS4 code for this review.