The title is one of a dozen games we saw for the Vive, which debuts in April and represents a major attempt to turn VR into a giant industry. Tech advisor Digi-Capital estimates that VR could be a $30 billion industry by 2020.

With the Vive, you can hold to touch controllers in your hands that serve very nicely as guns in this game. Sensors in your room map out the space on the floor where you can safely walk. So you can turn around anywhere in the VR environment and shoot anything that moves. The Space Pirate Trainer is like an arcade game that is really immersive, as if you were inside the arcade machine.

“Your job is to shoot the incoming droids and protect the spaceship behind you,” said Dirk Van Welden, founder of I-Illusions, developer of the game. 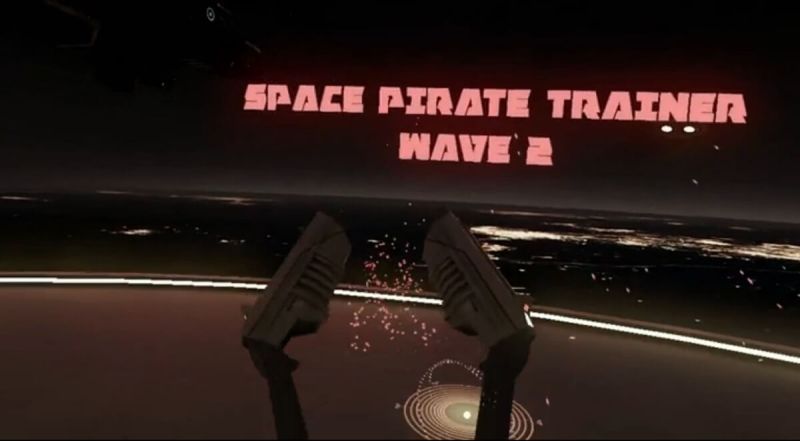 Above: Space Pirate Trainer is like an unending wave attack simulator.

The trainer starts out easy, with just one flying robot coming at you. You can see it approach on a 3D mini map. The robot flies all over the place, and you can shoot it down with a gun in either hand. You can also reach to your back and pull out a shield in your right hand. The shield deflects incoming lasers from the robots. But you can see through it a little bit. If you squeeze the trigger with the hand that is holding the shield, you can push the enemies away from you. It’s like a force field that pushes them back and gives you more time to deal with someone else.

You can use a pistol, an automatic weapon, or a lightning gun that zaps the enemies. With each new training wave, more enemies approach at the same time. The early levels are easy. But if the robots hit you three times with a laser, you’re toast. So it gets pretty hard where there are seven or eight robots shooting at you. They don’t all shoot at once, but they do move beyond your field of view. You get the best result when you hold the shield in one direction and fire in another. That way, you aren’t as vulnerable from the side or behind.

Inevitably, they’re going to get you. Sometimes you won’t even know from which direction you got hit. It’s just an endless combat trainer.

Space Pirate Trainer is coming out on the HTC Vive, hopefully as a launch title, Van Welden said.