Digital Legends Entertainment is one of the companies that has carved out a niche in mobile shooters. The Spanish game studio has made popular touchscreen shooting titles, such as The Respawnables and Afterpulse. That’s no small achievement in the $34 billion mobile-game market since shooters are hard to control on touchscreens, and they’re not as popular on mobile as they are on the PC and consoles.

A lot of studios have failed in the mobile shooter market. But Digital Legends Entertainment has been able to make the jump from successful branded shooters — it made the mobile version of Battlefield Bad Company 2 for Electronic Arts — to original titles.

“The company as you see us right now started about four years ago,” said Xavier Carillo-Costa, chief executive of Barcelona-based Digital Legends, in an interview with GamesBeat.

Its biggest success so far is the trigger-happy cartoon shooter, The Respawnables. It debuted three years ago and has been downloaded more than 40 million times. It still has more than 200,000 players. Now the company is trying to make a big success out of Afterpulse, which debuted last fall on iOS and is coming soon for Android.

“We’re not doing any marketing or user acquisition,” said Carrillo-Costa. “We aren’t getting any complaints about the controls, and so we’ve decided to keep the controls.”

I talked to Carillo-Costa at the Gamelab event in Barcelona last week. He said The Respawnables drew from what Digital Legends learned when it made the Bad Company 2 game for mobile. It kept the controls as simple as possible, and it shifted the view to third-person, rather than first-person. The aiming was much easier, with the crosshairs focusing on the center of the screen. If you have a sniper rifle, you can zoom in and aim with a scope. 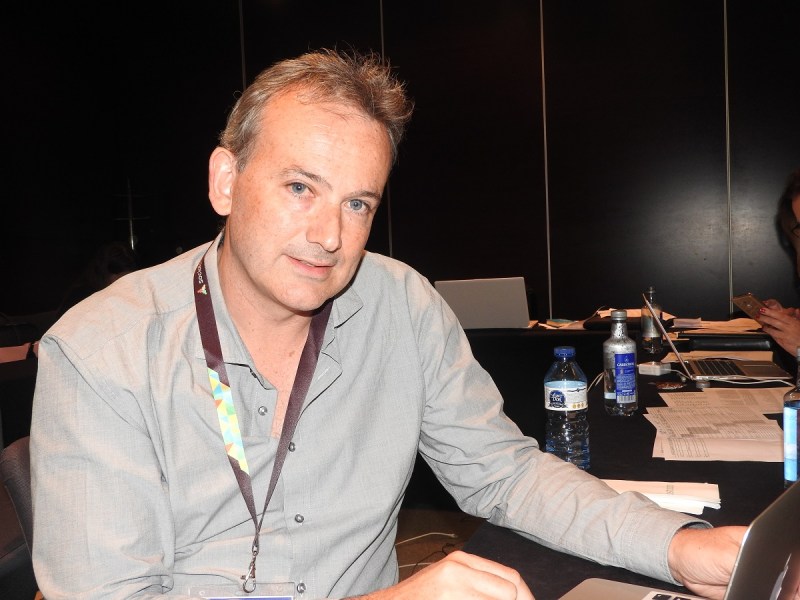 Digital Legends started in 2001. It made games for the Nokia N-Gage and titles like Soccer Fury for the PC. In the last six years or so, it shifted over to making iOS and Android titles, becoming a pure mobile game company. And with the debut of Afterpulse in October, it also made its first Apple TV game.

With Afterpulse, Digital Legends made the leap from cartoonish art to a realistic look. It focused on real-time rendering of 3D graphics with Digital Legend’s own proprietary mobile-game engine. The team tried to apply console techniques to the mobile device without slowing the experience down with bandwidth-heavy graphics. The team is shooting for Xbox 360-equivalent graphics on mobile, and it stays in close touch with mobile processor makers like Qualcomm.

The company has also made some big changes in the way that it is monetizing the free-to-play Afterpulse. With Respawnables, players never had a reason to spend more than $500 in the game. That’s a hefty amount, but it meant that Digital Legends lost potential revenue, particularly with players who were willing to spend more than that, Carrillo-Costa said.

Digital Legends partnered with Gamevil, the South Korean mobile publisher, on Afterpulse because Gamevil has a lot of refined knowledge about how Asian gamers pay for items in free-to-play mobile titles. In particular, Gamevil knew about “gacha,” a term for Japanese vending machines that yield surprise items. That term has come to describe the slot machine-like devices in games that dispense virtual items. The player buys a mystery package with real money. The gacha machine dispenses the package, and the player finds out if they got any rare items. Sometimes they do but often they don’t. Players keep coming back for gacha purchases. Carrillo-Costa knew this, but monetization through gacha was just the beginning of the lessons that Gamevil passed on.

“There’s a lot of variety to the gacha, and we’ve been working deeply with Gamevil to refine that,” Carrillo-Costa said. “We’ve brought it from role-playing games into a shooter game. And it’s working.”

The game hasn’t shifted to “pay to win,” where you can buy victory in a game. That isn’t popular in the West. You can buy weapons, equipment, and seasonal gear, such as special outfits for St. Patrick’s Day.

“People really appreciate the change in monetization,” he said. “A lot of people want to spend, and that mechanic is working well. We are combining the gacha features with the seasonal changes in the store.”

Gamevil is also helping Digital Legends with live operations and social networking. The game will add friends, tournaments, and other features that are appealing to multiplayer fans.

“We want to bring a console-quality experience but on a made-for-mobile game,” Carrillo-Costa said. “We are getting good feedback from people.”

As for the future, Digital Legends is working on a new game based on The Respawnables universe.