Miles Morales is a launch game for PlayStation 5, which debuts on November 12. You can also grab a PlayStation 4 version if you’re not ready for the next-gen jump yet. But, man, the PS5 may have spoiled me. Miles Morales looks so good and runs so well on PS5 that I can’t imagine ever going back.

But it’s not just a showpiece for a new console. Miles Morales is a heartfelt adventure that all Spider-Man fans should enjoy.

What makes a good Spider-Man?

So, is Miles Morales a sequel or what? To me, it sure feels like a sequel. Yes, it reuses the same map from the last game with a few changes. But, I mean, that map is Manhattan. That’s kind of where Spider-Man operates. Setting another game there makes sense.

And even though you’re still swinging past the same New York City landmarks, Miles Morales feels different. For one thing, it’s set during the holidays. It’s not a full-blown Christmas game or anything. You’re not helping Santa deliver presents (although that would be awesome). But as anyone who has ever been to NYC during the holidays knows, the city is beautiful during that time of year.

The same holds true in this game. I had a great time just swinging around and looking at decorations and Christmas trees while the pedestrians down below wished me Happy Hanukkah. 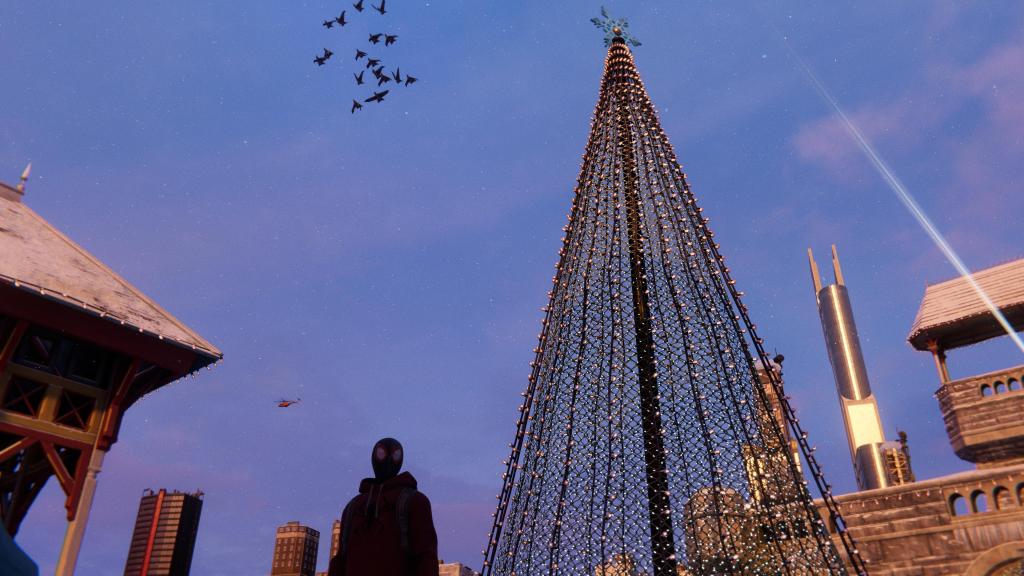 Above: It’s all Christmasy!

You also have a different hero. Miles Morales is also a Spider-Man, just like Peter Parker, but he has some distinct abilities. He has the power to turn invisible, which can give you a big advantage during stealth. It can also help you escape difficult fights if you need a moment to reassess the situation. Miles also has electric-based abilities that he calls venom. These are powerful attacks that can knock enemies down or blast them into the air.

Together, these new abilities add a little spice to the Spider-Man combat flow from the last game. You use webs to close the distance between you and your enemies, dancing around the battlefield while using venom and finisher attacks to help take the bad guys down. While Peter Parker relies on gadgets (he had eight, while Miles only has access to four), Morales’s approach feels more hard-hitting thanks to those strong venom attacks.

This game plays great. Traversal and combat are just as fun as they are in the Insomniac’s first Spider-Man. And we also get another wonderful Spidey story. While Peter Parker is a relatively experienced superhero in the last game, Miles is a newbie. He’s still figuring out his powers and their impact his relationships with family. In fact, family is the central theme of the game. What makes people family, what does family owe each other, and when does someone stop being a part of your family?

Like the best superhero stories, the narrative balances weightier moments with the excitement and fun of having powers. It all works because Miles himself is so likable. He’s really just a kid trying his best to make his city safe. And he’s far from perfect. He makes a lot of mistakes. He struggles. But he’s always someone that you want to cheer for.

The animation work alone instills so much personality into Miles. While Peter Parker would swing with grace, Miles still flails about a bit when he’s soaring through the city. It helps remind you he is still a kid with a lot to learn. 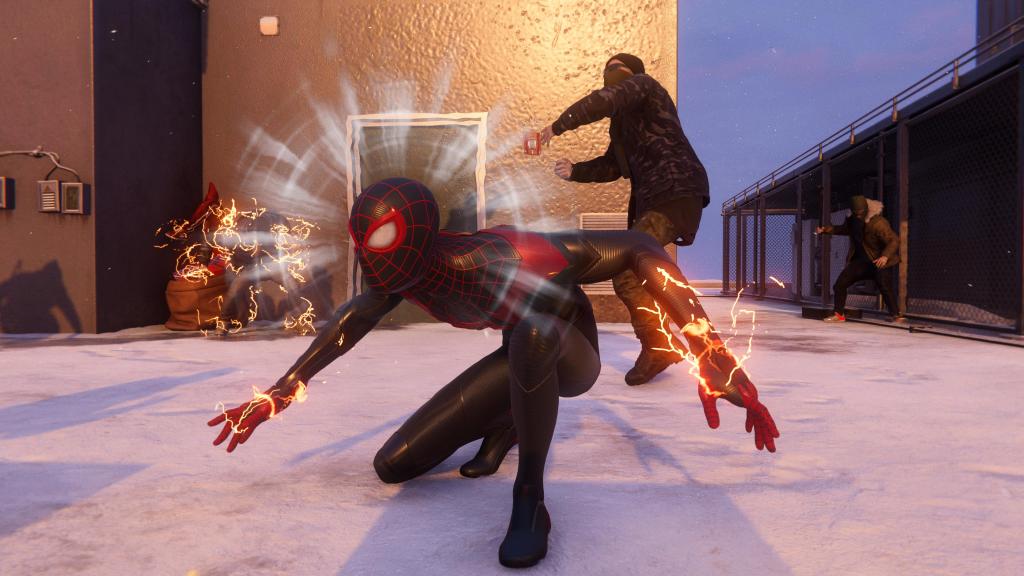 Above: Something is tingling!

Miles Morales looks great on PlayStation 5. You have two graphical options. One is a performance mode that prioritizes frame rate. The other is a fidelity mode that focuses more intense graphical features like ray-tracing. Fidelity mode runs at 30 fps, but that ray-tracing means that you can examine some of the realistic reflections you’ve ever seen. I was entertained just by hanging on a glass building and marveling at that technology.

But I preferred the performance mode, which gave me a consistent 60 fps experience. And, really, that kind performance is one of the biggest things I want from this console generation. And even though you don’t have those amazing reflections in performance mode, the game still looks great. Honestly, aside from those reflections, I couldn’t really tell you what was that different between the two. I’m sure if I counted pixels, I’d see that one has a higher resolution, but I couldn’t tell.

Spider-Man is also showing off those fast loading times, courtesy of the PS5’s solid state drive. Unless you’re using fast travel, you won’t notice load times at all. Even then, it takes about two seconds. 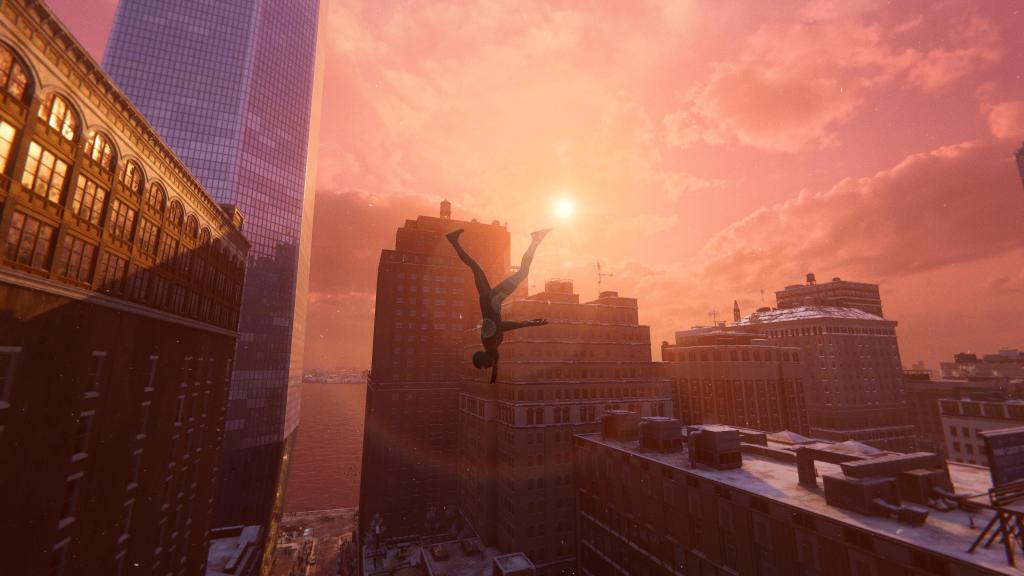 Above: What’s up, danger?

Miles Morales is a thrilling adventure with a good heart. It’s also a great showcase for the PS5, especially if you want to learn just how fast load times are on the new system or if you want to see what ray-tracing can do.

I’m sure if I timed each game, I’d see that Miles Morales is shorter than its predecessor. But it feels like a complete experience. Anyone who loves Insomniac’s first Spider-Man game is going to have an amazing time with Miles.

As I think about it, I’m not sure if a Sony home console has ever had a better PlayStation launch game than Spider-Man: Miles Morales. This certainly beats Knack and Killzone: Whatever the Subtitle Was on PlayStation 4.

Spider-Man: Miles Morales comes out November 12 for PlayStation 5 and PlayStation 4. Sony sent us a PS5 code for the purposes of this review.