Splash Damage boss Paul Wedgwood has a theory that Aristotle knows how to keep a game developer in business. 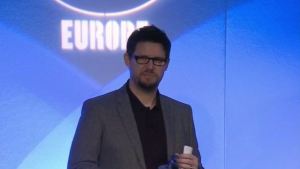 Wedgwood’s studio is responsible for games like Wolfenstein: Enemy Territory and the multiplayer in the upcoming Warner Bros. title Batman: Arkham Origins. In a chat during the DICE Europe developer conference, the developer says that Aristotle’s appeals to ethos, pathos, and logos helped to define the three questions that can help a studio create happiness — and Wedgwood believes that creating happiness is his company’s most important job.

“The three questions are ‘Why do we exist?,’ ‘How do we behave?,’ and ‘What do we do?.’ And they seem pretty obvious,” said Wedgwood. “What do we do? We make games. Sometimes we make money.”

Wedgwood says that the questions caused him to consider the history and future of Splash Damage. He told a story of preparing for Wolfenstein: Enemy Territory for a trade show in 2003 and how he ended up in a hospital with a collapsed lung.

“The guy opposite me [in the hospital] had a pretty sad story,” said Wedgwood. “He retired. He was a [truck driver]. He delivered soft drinks around the U.K. and he’d done it all his life. Over the course of his life he saved £60,000 and invested it in a British games publisher and he lost it all.”

The old man had a heart attack and Wedgwood said that everyone else in the ward was crying with worry for him.

“He wasn’t really that concerned that evening when I chatted with him,” said Wedgwood. “But it reminded me that sometimes we get so distracted by ARPUs and decay curves and attach rates that we forget that we’re really here to create happiness for our fans and happiness for our shareholders.”

Wedgewood explained that, for Splash Damage, the answer to the “What do we do?” question is “make more than we spend.”

“Business is a black box,” he said. “You stick cash in one end. You crank a handle and you make people happy and more money comes out the other end. If that’s what’s happening, then you don’t suck. The only key performance indicator when you’re a small indie developer, a medium-sized game studio, or a big publishing team is whether you are making more than you spend. It’s the cornerstone to survival, but it’s also the least important of the three questions.”

How do we behave?

During the development of 2007’s Enemy Territory: Quake Wars for PC, Wedgwood explained that he and his co-founder Richard Jolly both developed micro-management styles over their teams. He says they lost the respect of the staff and following the release of the game, which was a hit, a few senior managers at Splash Damage left to form a new studio that ended up taking away business from the studio.

“You can imagine I was flabbergasted,” said Wedgwood. “I didn’t give them permission. I didn’t tell them to do it.

“How we behave becomes really important,” he said. “If you think of a person’s character as being their destiny, then culture for a company is its destiny. Those values, whether you define them or not, those are things that dictate whether you are successful or not.”

After sampling the Splash Damage staff, Wedgwood found that they came back with values that include humility, integrity, and getting things done, but they also value the freedom and mastery that the company has fostered since learning the lesson following Enemy Territory: Quake Wars.

Why do we exist?

“We think that our purpose is to make money, but making money is actually the incidental benefit of success at doing what we believe in and convincing people to follow us,” said Wedgwood.

“We realized part of the reason why we survived is because 12 years beforehand we sat in front of a whiteboard because the press had asked us a really tough question: ‘Why did you start Splash Damage? What is it for?’ And we had no fucking clue,” he said. “So we wrote on the white board: “We will shamelessly pursue acclaim from press and fans — hopefully at the same time — while ensuring that our staff can pay their rent.”

After 12 years, Splash Damage has always paid its staff on time even if he and the other founders couldn’t afford to pay themselves on occasion.

“Just writing that purpose on a whiteboard made it come true,” he said. “It made a difference.”

Today, Splash Damage’s purpose is still to make core multiplayer games, but Wedgwood says that isn’t why the company exists. That reason has evolved.

“We discovered that we became friends through competition and cooperation,” he said. “That friendship has led to a manifesto and a better understanding of why we are here. We believe that the depth and quantity of friendships is best increased when we are collaborating and competing with each other. And our team values freedom and mastery above all other values — not just for our staff but for fans too. What we make is almost incidental.”