Some sequels don’t really have to do much. For Splatoon 2, many fans would have been happy to just have something similar to the original — which came out for the Nintendo Wii U in 2015 — on the newer Switch. The first game was one of Wii U‘s few bright spots thanks to its unique take on the multiplayer shooter, making it just as important to cover stages in ink as it was to take out players on the other team.

And, in a lot of ways, Splatoon 2 is more of the same. When the sequel comes out on July 21, fans of the first game will find a familiar experience. But some improved visuals, new weapons, the addition of the horde mode, and the Switch’s ability to turn the game into a portable experience makes Splatoon 2 a noticeable improvement. 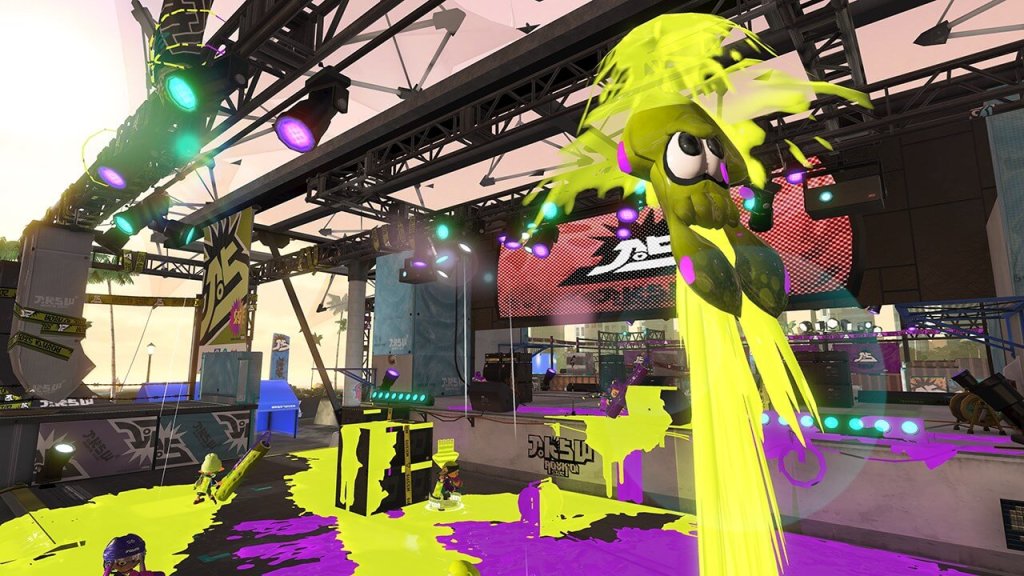 Above: The inklings return in Splatoon 2.

Fun alone or with friends

Splatoon 2 brings back the core of the first game, specifically the multiplayer Turf War mode and the single-player campaign. Both excel thanks Splatoon’s unique mechanics, which turn the third-person shooter into something more family-friendly. Every weapon shoots ink, which can destroy enemies (splat them, not kill them, because this is Nintendo) and cover most surfaces. You can turn into a squid and swim through your team’s ink (even up walls), which drastically improves your mobility.

Turf War has two teams of four competing to cover levels in as much of their ink as possible. Sure, killing (er, splatting) the other players is a big help (if they’re dead, they can’t be spreading ink), but winning depends just as much on making sure you keep control of the stage. It’s a great twist on multiplayer shooting that makes for plenty of tense matches, where you’re not sure which team actually won until the very end.

Usually, you expect a multiplayer-focused game like this to not have much for solo players. But, just like with the original, Splatoon 2 has a fantastic single-player campaign full of classic platforming challenges and creative bosses (like an evil bread oven). As with a classic 3D Mario game, levels in Splatoon 2 constantly throw fresh ideas at you, such as a new weapon, enemy, or gimmick (like grind-able rails, spongy blocks that grow when you shoot them, or orbs that you can teleport to when you hit them). 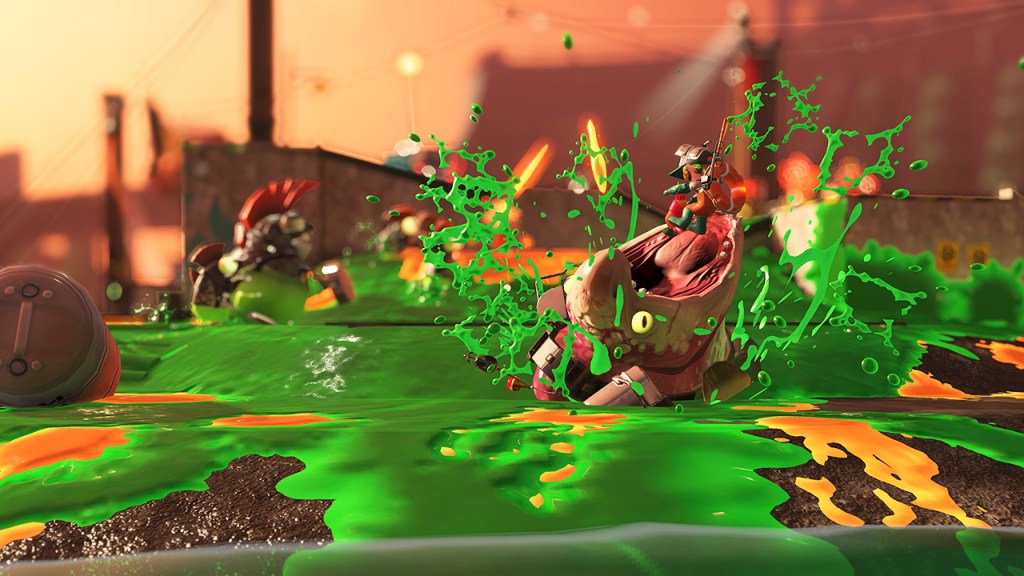 Above: Fighting for your life in Salmon Run.

While the campaign and Turf War are familiar, Salmon Run is Splatoon 2’s biggest addition. This is the series’ take on the horde mode, a shooter favorite that has a team of players working together to take down waves of enemies. Up to four people have to take down bosses and collect the golden eggs they drop, which you then drop off in a basket. You’ll have a quota during each wave, so you’ll need to collect a certain number of eggs. You gain extra points for grabbing extras.

It can be a chaotic mode that requires teamwork. Even when you’re playing with strangers online, you’ll want to use the in-game notifications (you can press Up or Down on the d-pad) to alert your allies to boss locations or call out for help when you die. Friends can revive you by shooting you with their guns.

The bosses are a lot of fun to take down, and most require strategies outside of simply shooting them down. One will open compartments that you need to throw grenades into, for example, while another can only be damaged from the back.

Like with everything else it tackles, Splatoon 2 manages to find a way to give something familiar like horde mode a fun twist. Above: That’s a big bud on a tiny unicycle.

Everything looks and sounds great

I love Splatoon 2’s style. It’s a unique world, which combines street punk graffiti with pop idol culture and marine water life, is beautiful to look at (and listen to, thanks to the bubbly, sometimes frantic tones of the soundtrack).

And everything looks better than it did in the original. The graphical upgrade may not be noticeable at first, but levels are more detailed and the ink has more depth and looks goopier. Splatoon 2 also runs smoothly in both docked and portable modes on the Switch. 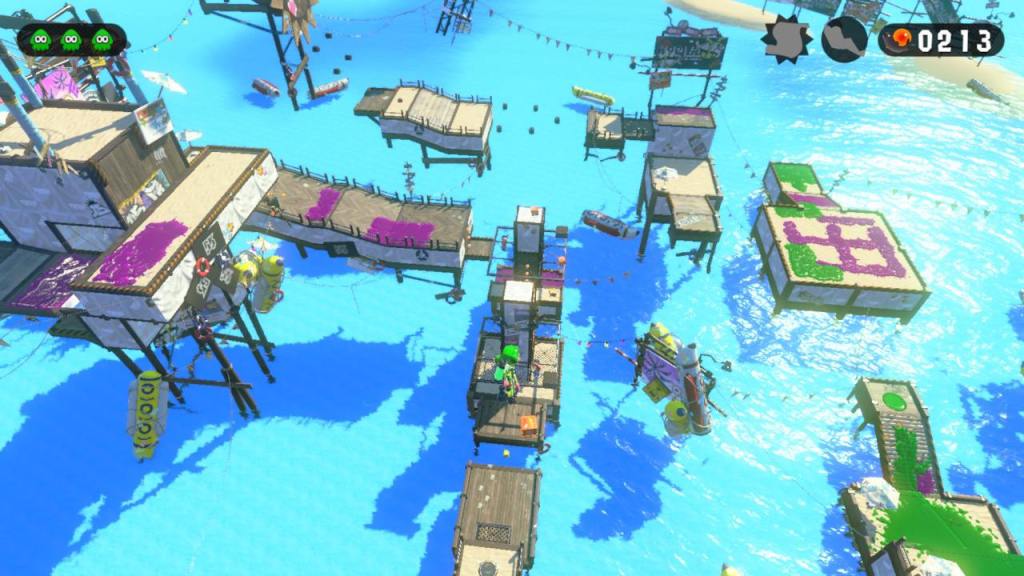 Above: You use jump pads to soar across levels in the campaign.

You’ll want to love Splatoon 2, but the game sometimes fights against you in random, weird, and annoying ways. For one thing, grouping up with your friends is something of a question mark for me at the moment. That functionality is actually going to be a part of Nintendo’s mobile app for the Switch. You’ll need to use it if you want to play with your friends.

But the app doesn’t come out until Splatoon 2’s launch on July 21. Without it, trying to play with my friends was a pain. It could only be done in the game’s lobby by selecting a friend who was already playing and choosing to join their match. Then, if a spot is open, you can get in with them. If a spot isn’t open, you’ll have to wait. And even when you get in, the game won’t automatically put you on their team.

Now, presumably the phone app will make grouping simpler (and let you voice chat with them), but it baffles me that this can’t just be done inside the game. Something as simple as entering matchmaking with my friends shouldn’t require outside software running on a different platform.

While that annoyance hopefully won’t be too big of a problem once the app is out, others will persist. I hate that I can’t change my gear, including my weapons, between rounds. Changing your gun can completely alter the way you play, so it’s something you’ll likely want to do. But once you start looking for a game, you’ll have to back out to the main matchmaking menu before you can change your equipment. You also can’t do it between games without exiting, which is annoying if you’re already playing with a full group that you like. Every other multiplayer shooter I can think of lets you switch your loadouts while the game is trying to find you a match.

I also don’t like how Splatoon 2 rotates maps, a system that it carries over from the original. Only two levels will be available per mode at any time, with the rotation changing every two hours. Why not just put all of the maps in the rotation? That way you’ll have more variety in less time. The way it is right now, if your timing is bad, you’ll be stuck playing the same two stages for a single two-hour session.

Even Salmon Run is subject to a bizarre annoyance. While you can play it locally with friends whenever, it’ll only be available for online matchmaking during limited times. It’s a weird, frustrating design decision. 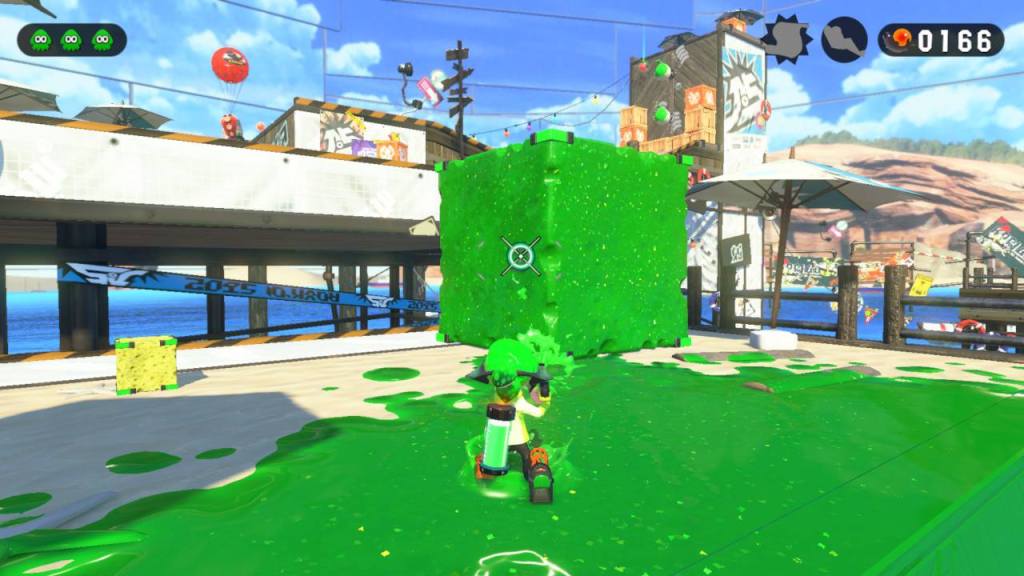 Above: Make it big.

Despite some random bad decisions, Splatoon 2 is a fun and clever game that is a must-own for anyone lucky enough to have Switch this early in its lifespan. The single-player campaign is creative and reminiscent of Nintendo’s best efforts in 3D gaming with Mario, while the multiplayer offers a brand of team-based shooting that you won’t find in other games. Salmon Run’s twist on the horde mode helps Splatoon 2 feel like an even more complete package than the original.

Splatoon 2 is just an easy game to like. It’s bright, cheery, and employs endless tricks in a constant quest to make you smile. It shouldn’t be cool — this is from Nintendo which, as much as we love it, is about as “cool” as a magician at a kid’s birthday party. It also stars anthropomorphic squids who say things like, “Don’t get cooked, stay off the hook.”

But Splatoon 2 is cool (at least as cool as a 30-year-old gaming journalist like me is allowed to deem it). It never feels insincere or pandering. Even though it’s a sequel that carries over a lot from the original, it still feels fresh.

Splatoon 2 comes out for the Switch on July 21. Nintendo sent us a code for this review.