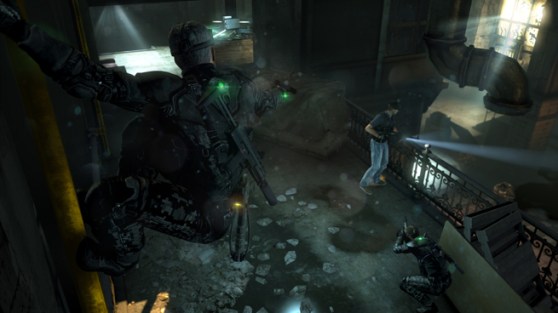 Everybody hates an opportunistic terrorist. With every agency in America focused on radical group The Engineers and their resource-destroying agenda, somebody thought they could sneak into India and steal a nuke. Wrong. Fourth Echelon noticed. And they’ve got enough spare time to administer some correction to the offending parties.

So when the op comes up in conversation, Fourth Echelon director and lead agent Sam Fisher sets a course for South Asia. That’s how the co-op side missions work in Tom Clancy’s Splinter Cell: Blacklist (due Aug. 20 on Xbox 360, PlayStation 3, Wii U, and PC). Wander the decks of the Paladin, your airborne mobile HQ, and chat up your 4E team Mass Effect-style, and opportunities for a little side work abound. The India job, appropriately dubbed Missile Plant, comes from ex-CIA operator Briggs, Sam’s backup out in the field. Pairing up with another player casts you as Sam or Briggs. Dealing with ancillary threats like this puts extra cash into Fourth Echelon’s budget, enabling you to upgrade Sam’s gear, your multiplayer loadouts, and the Paladin itself for even more in-mission advantages.

And if I take Missile Plant as representative of Blacklist’s co-op missions, it shows off a lot of smart choices … along with a few serious flaws. 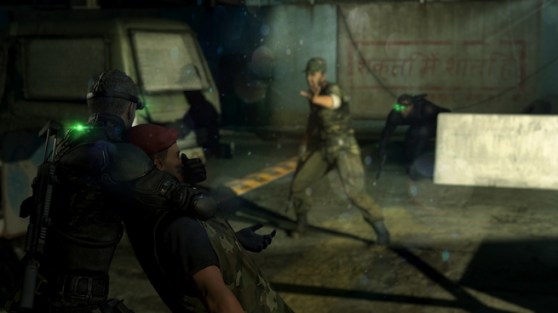 Sam and Briggs start off outside the Indian missile base, where guards peacefully roam as if nobody’s stealing fissionable material under their noses. India is technically an ally, so the rules of engagement keep me and my co-op partner to strict nonlethal methods only, and the mission fails instantly if we’re spotted. We’ve got stun bolts, EPM grenades, and enough sticky noisemakers to lure every gullible solider around to some empty corner of the map.

The mission structure breaks down into five smallish areas, not unlike the recent Hitman: Absolution. Find the door, traverse the next section, find the next door, repeat. Missile Plant starts off simple enough, with an outer guard post to sneak around and a few human obstacles to beat down. The next area opens up to the inner parameter and barracks, guard towers with snipers, and more patrols. That leads to a tighter, fenced-in area with security drones we have to evade or disable. Destroying them alerts their controller. Mission failed.

Those all came off as classic Splinter Cell, if a little on the easy side. I strolled from shadow to shadow, took out some guys in my way, and tricked the rest into chasing decoys. But for a co-op game, there just wasn’t enough for two people to do. 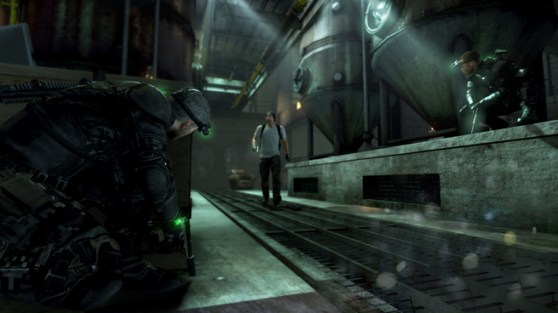 Indeed, my co-op partner — by his own admission — wasn’t terribly good at these games, so I ran point and cleaned house with only occasional support. It didn’t feel too taxing. The “no alerts” clause led to more restarts than anything, and that came down to stealth game trial-and-error rather than a proportional challenge. Mostly, threats lined up single file, and as the guy in front, I handled them. The exit doors required both players to activate, we found a shortcut via boosting each other up onto a ledge, and we had to evade those drones long enough to simultaneously flip switches, but a designer could remove those elements with a few mouse clicks. In every other way, this felt like a single-player mission.

And it’s a pretty decent one. The flow carried a good sense of escalation and varied the threats nicely from section to section. Finally, once we got inside the missile plant itself and found dead Indian soldiers, our handler took us off the leash. How and why a terrorist group left everyone outside unkilled and blissfully unaware struck me as odd, but let’s go with it for now. Lethal force: authorized. From there on in, our options opened up to any play style we cared to employ, and a heavy shootout and escape closed the mission.

We went from completely silent to thunderously loud over the course of 40 minutes, give or take with restarts. No area overstayed its welcome; possibly one or two could’ve been longer. It made for a great side-mission … minus the need for a sidekick. 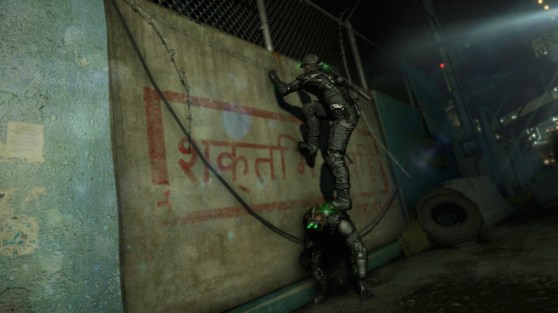 Now, no lie — two skilled players in constant communication could’ve played Missile Plant like a five-act opera, sweeping each area in glorious tandem. In fact, several opportunities exist to pair up on Splinter Cell’s mark-and-execute system, where tagged enemies instantly die in a hail of silenced gunfire. My partner frequently didn’t accept invitations to double-executions for whatever reason (a very large prompt appears onscreen), but the times we did sync up made for some very satisfying results. Also, a new, heavily armored enemy requires cooperation in order to take him down quietly. One gunner must pop off his armored helmet while the second pops off his skull. Pulling that off really gives you a strong sense of teamwork.

Only it turns out I didn’t really need a team. I hope later co-op missions put greater focus on two-man operations, objectives, and options, with scaled-up threats and multiple pathways for several players. Not coulda/woulda/shouda stuff, either. I’m talking about an approach that makes working together inherent and vital from the mission design upward.