Square Enix is revealing the details of yet another episode in its Hitman title today with the Marrakesh location. Marrakesh is the third episode of seven that will be released throughout 2016.

The first installment debuted in March and it enabled you to play Agent 47 in the city of Paris, where the highlight was assassinating an oligarch at a fashion show in Paris with more than 300 different artificial intelligence characters in the crowd. Marrakesh is a new open world with more targets, like a general planning a coup.

One of the live events happening soon is the launch of the second “Elusive Target” scenario, where players will need to locate the elusive “Congressman” on a visit to sunny Sapienza on the Italian coast, the location for the second episode. The previous Elusive Target was Sergei Larin, the Forger, who had to be taken out over 48 hours. Only 53 percent of players succeeded in taking him out, and less than 10 percent got the “silent assassin” award. The players only get one chance and a limited time to take out an Elusive Target.

The whole straetgy is a plan to keep players engaged throughout the year. It’s a daring release strategy for publisher Square Enix and Danish developer IO Interactive. We spoke about the latest with Torben Ellert, lead online game designer for IO Interactive. 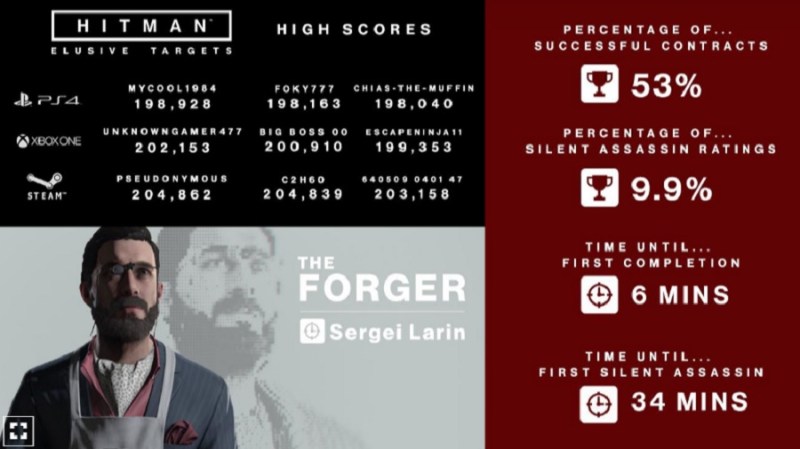 Above: Hitman’s first “elusive target” Sergei the Forger was killed by 53% of players.

Torben Ellert: My key focus is on the game’s online content, the service content, the stuff that comes out in between the big releases. These are the escalations, these little gameplay challenges we put out every week, and the elusive targets. We had the first one over the weekend.

GamesBeat: How did that go? What was the feedback like?

Ellert: It went well. I had one guy telling me, “I got a survey in my spam and I answered it.” That moved me. We’ve seen people streaming it. We’ve seen people doing it almost as a party game. We’ve seen people put up enormously detailed walkthroughs, and this is a mission that was live for 48 hours. People were putting up the recipe for how to do it Silent Assassin. It’s been everything we expected.

GamesBeat: Did you have an expected success rate? And if you did, were people more successful than you expected?

Ellert: We saw something like a 10 percent Silent Assassin rate, which is lower than on the story missions. But given the fact that you only get one shot — if it goes wrong, once the target’s down you can’t restart — that seems pretty high.

GamesBeat: Was there a particularly common way to do it?

Ellert: The way most people did it was they eliminated his bodyguard. Once the single bodyguard was gone, they had free rein. Most people did it in the small office with the two doors because there are easy ways to hide the body and he’s isolated. But we saw everything from being pushed out the window to explosions to everything under the sun. 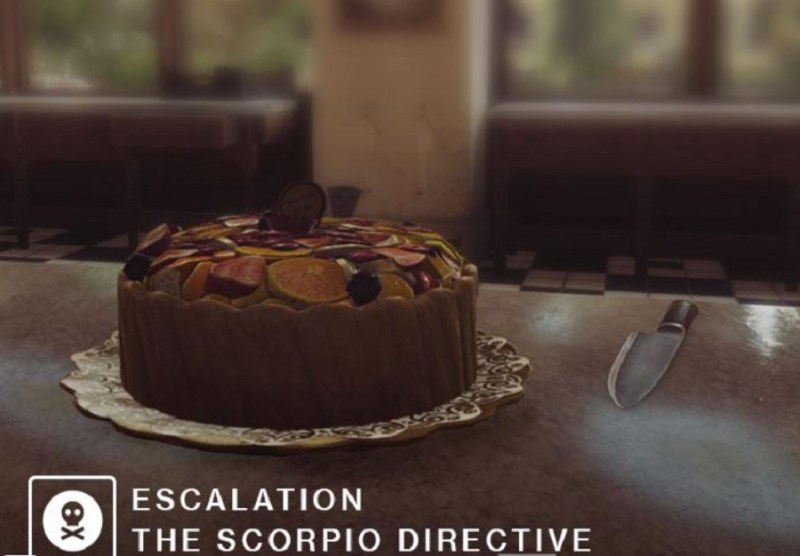 Above: Just a cake, or a hitman’s weapon?

GamesBeat: What are you learning from the live operations?

Ellert: It almost seems as if Hitman is a party game. It’s so fun to play with friends, either physically on your sofa or online in your streaming chat. I wouldn’t say it’s a surprise, because Hitman’s always been like this, but we’re in this age now where the way we consume our games is more connected. Being in a position to make an escalation together with a streamer, together with a notorious speedrunner — we make the content, bring it back to the community, and stream the first playthrough together with the guy. It’s fantastic.

GamesBeat: You guys said there were 300 NPCs in Paris, right?

Ellert: There are 300 of what we call full NPCs. These are characters that can respond with a full range of AI. They can report crimes. They can talk. They can do the whole thing. That’s separate from the crowd. The crowd is a different system, and that can be a thousand strong, like you saw in America. Most of that is crowd.

The crowd can be possessed. We can go in and swap crowd members out with full AIs. But we’re capped at about 300 because, to be honest, that’s what we can run.

GamesBeat: With the crowd, are you able to use them to cause a lot of mayhem and do diversions?

Ellert: It’s tricky. They look like real NPCs and people expect that they behave like real NPCs, but unfortunately we don’t have that fidelity. The crowd is basically a volume. It’s not individual pieces. Sometimes you’re standing somewhere and you think, “There’s no one here,” but technically you’re still inside the crowd volume. We see weird stuff with, “No one saw me!” but technically the crowd did, even though there were no crowd members spawned next to you. Technical mumbo-jumbo.

The crowd system is fantastic because it gives that sense of life. But the 300 NPCs, those are the ones that we really built our gameplay around. They’re the ones who can be targeted in contract mode. They’re the meat and potatoes of the gameplay. 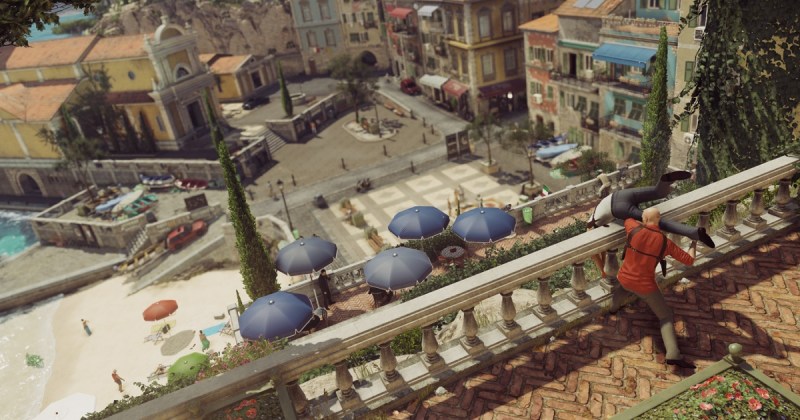 GamesBeat: Are they reusable, then, with different skins that you can drop in new episodes?

Ellert: We try to build them differently. The ones that might make sense in Paris — they’re all wearing evening dress, right? We can reuse those in another location where that still make sense. Drop them into Marrakesh, though, that would look a bit weird.

GamesBeat: Can their behaviors be dropped in, though?

Ellert: To a certain extent. The main NPCs, the 300 NPCs, yes. Their behaviors are fully systemic. They can hear and see. If a civilian NPC sees something suspicious, they will find a guard NPC and alert them. Sometimes that guard NPC is 47, of course. A crowd member will run up to you and say, “I saw a body! Help!” because they see an authority figure, even though it’s actually the player.

GamesBeat: It seems like in Silicon Valley, the big craze right now is bots. It’s like, “Wait a minute. These things are already in our video games.”

Ellert: What I see is almost an uncanny valley effect. We talk about this in CGI, obviously. The closer you get to photorealism, the easier it is to spot tiny differences. We see this with our AI as it becomes more and more adept at reacting. You see the weirdness more clearly. It’s not because it’s stupid. It’s because it’s approaching what you would expect to be real. When it does things that are stupid you notice that much more clearly.

GamesBeat: That includes repetition or….

Ellert: Things like situations that have peculiar emergence. You could see a guy walking into a room with a huge pile of dead bodies. Agent 47 is crouched inside those bodies, so the AI can’t ray cast to 47. It just sees bodies. It’ll say something like, “Command, something strange is going on!” That’s really funny, because he’s in a room full of corpses. And then 47 pops up and hits him in the head with a hammer.

Comedy gold, right? It’s funny because the AI seems completely oblivious to what’s going on. But it’s a function of the fact that it’s actually pretty smart.

GamesBeat: It detected something, but it didn’t react quite right.

Ellert: It detected something, and it’s responding in the way that it can. But the ways it can, that can’t be everything. Because it’s so high-fidelity, people laugh at it or expect it to behave like a person. Which it isn’t, thank God.

Above: Hitman has style. Very Bond-like in this scene.

GamesBeat: Are these things that can be picked up and dropped into something else? It seems like that’s what you’d do with a person. Pick them up and put them in another situation.

Ellert: We move them around between levels. That’s the way we build the loose targets. We take bodyguards and assign them to a new VIP. Then all of their bodyguard behavior runs normally. We can totally do that.

GamesBeat: It seems like you guys are having fun experimenting with where the borders are.

Ellert: And just having fun seeing what our players do with it all. The whole jack-in-the-box situation in a pile of bodies that I was mentioning, it’s hilarious. And the great funny abuses of our systems. This is something Hitman has always done. It’s always been about finding the glitches and the bugs and having fun with them. We’re just embracing that.

GamesBeat: Is this in some way going to guide you for future episodes?

Ellert: Absolutely. We see what people do, and sometimes we see things that are really broken. Certain explosives don’t do enough damage to kill people, for example, but they do have a very high impulse effect, so they can physically push people. That will sometimes bounce people out of bounds — off a cliff, say, down to a place where there is no nav mesh. And then we’re off to the races, because everything breaks. We’ll fix that, because it would break the game. But otherwise we just want to embrace the fun and the craziness.

Above: Hitman’s Agent 47 is back in the new reboot.