Roberts Space Industries and Cloud Imperium Games have raised more than $188 million to build the Star Citizen massively multiplayer online sci-fi game, thanks to huge crowdfunding support from fans. But with that fan support comes a huge responsibility to communicate and get it right.

That’s why the companies are announcing every bit of progress, including today’s launch of the Star Citizen Alpha 3.2 quarterly software patch, which will reach thousands of players who are playtesting the game. A full launch of Star Citizen’s persistent online universe isn’t scheduled yet. Built with Amazon’s Lumberyard game engine, the game and its various subgames are among the most ambitious ever made, with studios in five cities working on the project since as early as 2012.

Version 3.2 is the newest update to first-person experience where “players fly space ships, battle on foot through massive environments, explore planets and moons, and create and discover adventure in an ever-changing and expanding galaxy.” It adds a new grouping system as well as mining, where players can find and mine their own resources in the game.

Erin Roberts and Eric Kieron Davis recently spoke with GamesBeat about the overall progress and the improvements in 3.2 version. As many as 50 players can travel the universe together in various flyable ships. Full told, players can now fly 60 ships and find 300 in-game weapons. 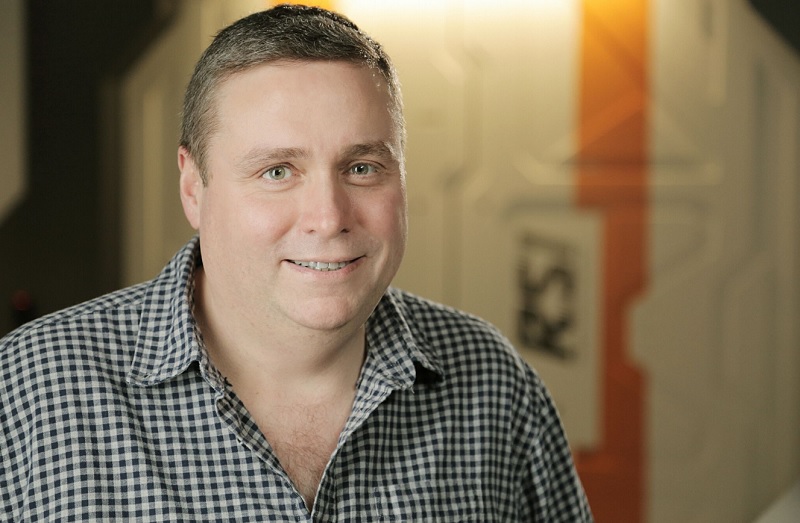 Above: Erin Roberts is chief development officer on Star Citizen.

Erin Roberts: So, 3.2 is a continuation toward getting the game out. 3.1 was in March, and obviously next week, with 3.2, we’ll be getting a bit more gameplay into the Star Citizen universe. The first few years were about getting the tech running, getting the engine up to speed, getting it to work for 64-bit, all the tech work we had to get done to support this huge universe. Now, this year, it’s really about refining the player experience, making it easier for people to play together, making the UI more sophisticated so it’s easier to use, and getting some other feature work into the game. That’s generally our push this year.

3.2 is obviously in June. We have a big tentpole milestone coming in 3.3, which is going to expand the universe massively. On a general basis that’s where we are.

Eric Kieron Davis: With Star Citizen, the universe and all of our modules are playable now. We have people playing hundreds of hours of all those modules every week. They’re jumping into the 3.2 release to give us helpful feedback. It’s ready to go live, and it’s been cool to get everything running and get some feedback from our players.

GamesBeat: As far as being playable, how far back does this go now for Star Citizen itself?

Davis: It goes back to our very first hangar module, which was 0.1.2 or something along those lines?

Roberts: I joined in 2013, and the first playable was a year after that, in June or July. Once we got that working, then we moved on — of course I was doing a lot of work on getting the technology and the engine going back then. The great thing about what we’re doing is that with the support from our community, we get to build it with the community, and then once we’ve dropped it, we go through the process of asking the community, what are the next features you’d like to see? Then we can that into the next drop as the game continues to be built.

GamesBeat: Where are you now as far as how many people can be accommodated in the alpha? Is that going to change? Are you in the hundreds or thousands of players?

Roberts: In terms of an instance, right now we can put about 50 players in an instance. That will go up, but the final plan is obviously once we get the server meshing in — that won’t be this year, but that will be coming in next year — that will allow everyone to play in one huge instance with all the players. The servers will patch people from place to place. You can have 200 people in a room, and when they leave that room, another server takes over. When they take off into space, another server takes over. But the goal is to have everyone in the same instance.

Right now, as I say, we’re at about 50. We’ll probably get up to about 100-odd once we get the unconstrained streaming stuff in later this year. But right now, as far as the concurrency of players together, we have thousands of players who are in the game all the time. 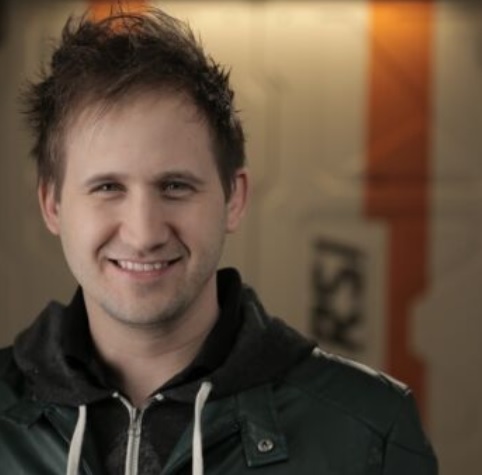 Davis: 3.1 is live right now, and that’s the one that everyone’s playing. People will get involved in the public test universe as we release the next one as well.

GamesBeat: The point where you can accommodate a very large number of players, hundreds of thousands, how far away do you think that will be?

Roberts: That will be next year.

GamesBeat: What are some of the things that have to happen in order to realize that goal?

Roberts: Once again, that comes down to the server meshing. What we’ve done is we’ve worked on a lot of tech. We had to completely rewrite the network layer of the game. Obviously we were originally using the CryEngine and now we’re using Lumberyard. We had to rewrite the whole network layer to support this huge infrastructure. We’re very efficient about what information gets passed to different players. That allows us to support the numbers we have in an instance right now.

The big thing we’re working on, though, is the ability to have servers talk to each other. What you have is one server passing people to another server. If we have 10,000 people playing together in one instance, one universe, what will happen is, some people may on one planet, some people may be on another planet, and some people may be in a different system. Each server will control the people that are nearby each other, and then once they move to another system or planet or even room, because it scales with the bounding — you might have 500 people who in one room, and we’d have one server dealing with that. They pass that information together.

The first iteration will be getting it working so the servers talk to each other and pass people to each other in one instance. If I jump from one system to another, it’s sending me to another server with everyone who’s in that system. We keep everybody playing together, and the servers control different sizes of groups, from the micro-level of one room all the way to a system, depending on how many people are in each area.

Davis: Already there’s no loading in the game as it’s playable now. When you wake up in bed and get in your ship and travel across the universe, there are no load screens.

GamesBeat: If you’re in space and you go down to the planet, the goal is to have no loading?

Davis: That’s happening right now, yeah. When you’re out in space and dogfighting or doing missions, if you go down to a planet there’s no loading between those two states. That’s how the whole universe is now. And we’re getting a lot more people involved in that so you have a more interactive experience. 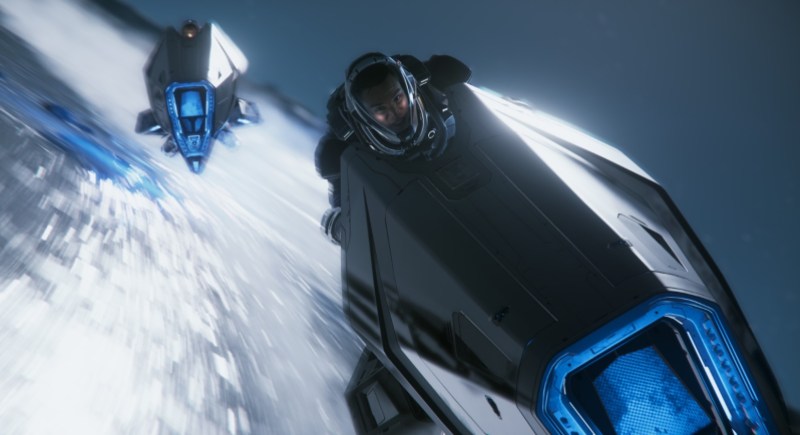 GamesBeat: What’s the goal as far as how large a group of people could be in one battle or something like that?

Roberts: I’d like to say as many as we can fit. That’s the hope, especially with all the work we’re doing on the tech and the tools. Before we’re actually doing the server meshing we have to make everything really efficient, and that’s why we’re doing it this way. Also, we’re being a big tech pass to make the shift less expensive. But we’ll have a balance. 200 people at least fighting each other in their ships, whether it’s in big capital ships that they’re manning together — the hope with Star Citizen is that people can just do what they want to do.

If you want to fly your ship solo, then you’ll fly your ship solo. You might be part of a group where there’s a large capital ship that has 20 guys manning it and six fighters next to it. That could be the team you go into battle with. The small ships protect the large ship, the large ship is the mother ship, and so forth. But the whole idea is to play as a team. We’re spending a lot of time trying to get the game to a level where it’s all about playing with your friends and having the adventure of your choice. If I want to play with my friends, if I want to do something else, if I want to have a career, those are all choices we want people to have.

Davis: Right now, 50 is about the number, because as Erin mentioned that’s the size of our servers. We recently had some people gather together in one location on one planet and then all get together in one ship – it’s called a Reclaimer, one of the biggest ships in the game. We have organizations — that’s our name for an in-game team or group — regularly getting together 30 people in one location in 3.1. As we scale up to more people on the servers with server meshing, that should naturally increase.

Roberts: Starting from the beginning of the year, we released 3.0 in December. That was the culmination of a lot of tech work. That was two or three years worth of very hard work to get it to where it was. Because of that, there weren’t a lot of drops to the community in terms of new stuff. At that point we decided we wanted to get into a date-driven system where every quarter, we would drop the latest stuff to the community so people could see the progress and what was going in.

3.1 was basically a cleanup and improvement of what we had in 3.0. We had this huge amount of tech that went in there, and we went back and improved usability. We respec’d the game so it’s faster. We’ve got a huge enhancement to the game in 3.3, which is when we’ve got the object container streaming and so forth. That’s going to make for a much better experience. 3.2 is where we drop one of our big gameplay systems, mining, which is basically a career. You can go in the ships that people now have to mine and get minerals and sell that in other parts of the game.

The process of this year is going through and keeping on improving the experience. We’re making sure it’s easier for people to play together. We’re enhancing performance. We’re doing a lot of things like this all the way through. The systems that are in play, we make sure that they’re getting better. We have more missions, more stuff for people to do throughout the year.