Star Trek: Bridge Crew launched with a re-creation of the classic U.S.S. Enterprise bridge in virtual reality, thrilling fans of The Original Series. Today, developer Red Storm announced on the PlayStation Blog that it’s bringing another fantasy to life: Starting May 22, players will be able to take up positions on The Next Generation‘s NCC-1701D, thanks to new DLC for the PlayStation VR version of the game. And one of your missions will be a horrifying battle with the Borg.

Between new Resistance and Patrol missions, the new DLC package places players in the all but impossible task of facing down a Borg Cube, one Red Storm first designed to be “nearly indestructible.” Crew members — including a new Operations officer — will need to warp across space collecting anti-Borg prototypes as the assimilation-focused cyborgs are destroying everything in their path. 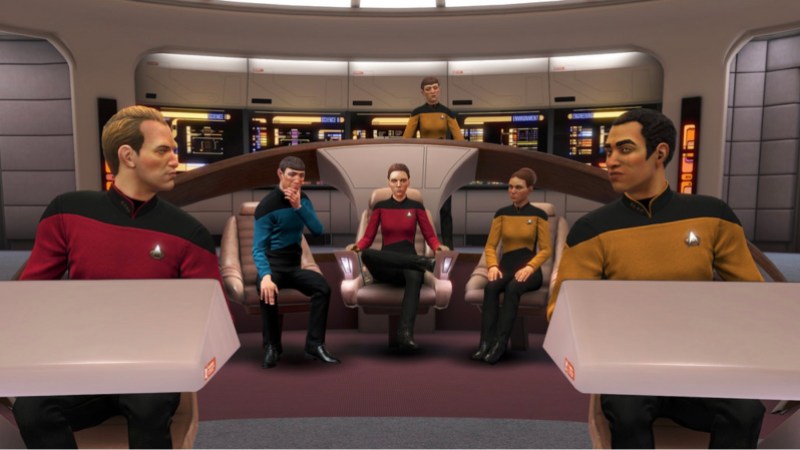 Above: The TNG costumes are there, but the show’s characters are not.

Beyond the aesthetics, which benefit from added TNG uniforms, Soong-style android avatars, new voice work, and the additions of both Romulans and Borg, the game features new elements from the 1701D’s bridge — including shield modulation, precision phaser fire, and other beloved touches from the series. Red Storm notes that it spent a long time tweaking everything from AI to damage and regeneration levels to make the Borg vulnerable but still terrifying, with multiple possible ways to achieve victory.

The Next Generation DLC will be exclusive to the PlayStation 4 until July 21. At that point, a PC version will be available through Steam. Like the rest of Bridge Crew, which was updated late last year to support non-VR play, the new content will be available in non-VR format as well.