Star Wars: Battlefront II is coming in hot, and Electronic Arts is revealing the first details of the single-player campaign where you play as a commander in the Imperial special forces.

Battlefront II debuts on November 17 on the PC, PlayStation 4, and Xbox One. In the story, you suit up as Iden Versio, commander of an elite Imperial special forces unit that happens to be on Endor when the second Death Star explodes at the end of The Return of the Jedi.

I played the prologue and the first two chapters of the Battlefront II single-player campaign at an event at EA’s headquarters in Redwood City, California. I also interviewed Mark Thompson, the game director for the single-player campaign at the EA Motive studio in Montreal. While playing, I had to do a double take, as I was seeing the world from the Empire’s point of view.

This preview has narrative spoilers — Ed.

The story moves along from one action sequence to another at a brisk pace. And it does a good job of slowly introducing Versio. Within the course of these first few chapters, we learn that she has a heart, but she has to withstand the brutal authority of her father, who is also her commander. As always, Star Wars is about emotion and families, and I could see where this was heading. At some point Versio will question just how loyal she will be, not only to the Empire but also to her father.

It enough to keep me interested in what’s going to happen in this tale where you play the Dark Side … or maybe the Gray Side. 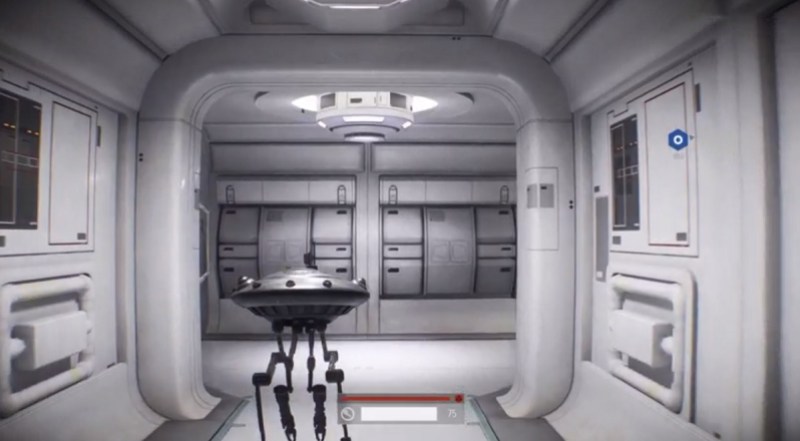 Above: Maybe they should have disabled the droid.

The prologue opens with Versio as a captive aboard a Rebel ship, facing an interrogation. But the Rebels make a big error. Her helmet is voice-enabled, and when they leave the room, Versio issues commands to her droid, which the Alliance is about to dissemble. YHou take control of the droid, zap the Rebel hacker, and then escape through the air vents. You have to be subtle enough to get through the corridors and vents to avoid detection.

You have to maneuver the droid back to Versio and then set her free.

“Right on time,” Versio says with the typical overconfidence of an Imperial officer.

Once free, Versio becomes the player character, and you have to avoid getting caught by the guards. You pick up a blaster and shoot the Rebels in corridors of the vessel. You can shoot at the Rebels, miss them a few times, and still kill them. This part is forgiving, as it’s intention is to show how accessible EA has made the first-person shooter.  You can even dispatch your droid to take care of an enemy who is bothersome. 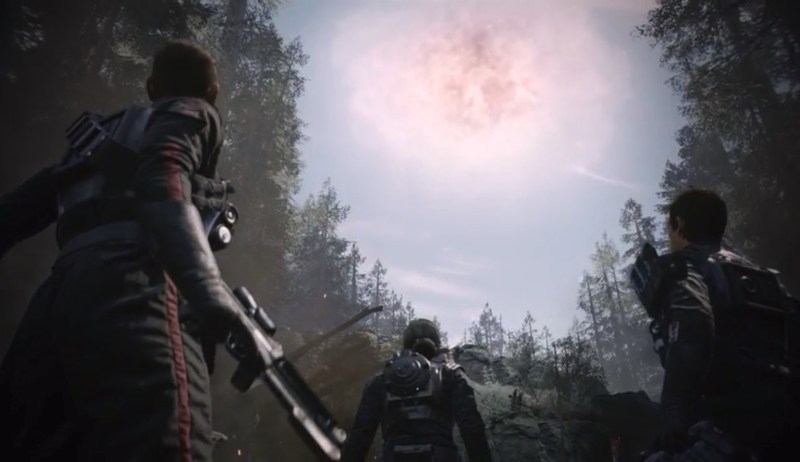 Above: So long, Death Star. We hardly knew ye!

Game director Mark Thompson of EA Motive said in an interview with GamesBeat that the easy onboarding is intentional, as you have to remember the legions of Star Wars fans is. EA doesn’t want to turn anyone off with something that’s tuned for hardcore gamers.

“Some people could have 200 hours of multiplayer experience before they even touch the campaign,” he said. “We know that Battlefront appeals to people who just want to play online, right? Then there are people who maybe just want to play single-player content, but they could play hours of couch co-op or arcade. With Battlefront, co-op is used in family-and-friends situations — bring in a Star Wars fan who isn’t necessarily a gamer and show them how fun it can be to interact with Star Wars. We don’t really know how people are going to approach the campaign, how much experience they have.”

Once you get the hang of the shooting, Versio steals the Rebels’ data and escapes from the ship. It’s a strange feeling as you are shooting the good guys. Versio has outwitted the Alliance: She allowed herself to be captured in order to find out Rebel secrets. 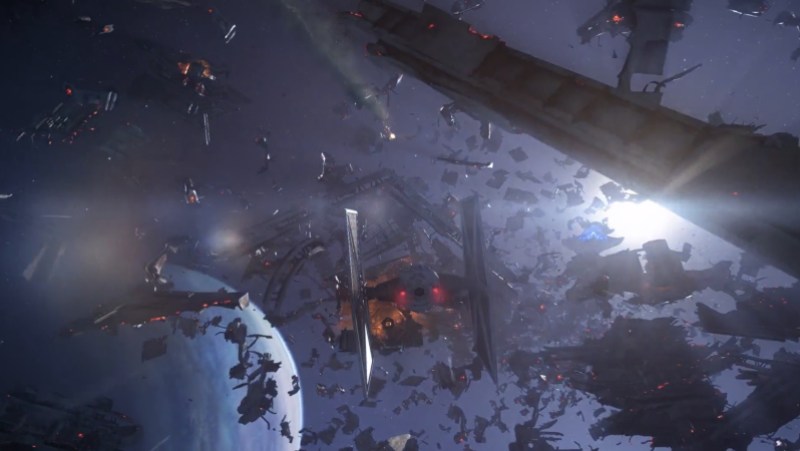 Above: The debris of battle hangs above Endor.

The real action starts as you get back to Endor and your squad, which is dubbed Inferno. Versio’s adventure begins as the Death Star explodes in the skies above Endor. She sees it blow up, but she struggles to contain her emotion. She is trained as an Imperial soldier, and emotion isn’t part of the job. She tells her squad that their job remains the same, to eliminate the Rebels.

They make their way through the forests of Endor, and they come upon a Rebel patrol. The action begins, and the Alliance troops are still quite easy to dispatch. I picked up a blaster and fired at Rebels who peeked around trees and took them down. Again, this was easy.

I fought my way to a TIE Fighter platform and encountered some heavier resistance. We had the jump on the Rebels, but they had a heavy gunner. I tried to stare down the gunner in the open in a duel. That was a bad idea, as they shot me. That was the first enemy I ran into who put up much of a fight, and it was where I learned that I had to hide. Just as I was about to run out of patience, I saw that this wasn’t going to be a complete cake walk.

I was forced to take cover and shoot, and that made the gameplay more interesting. Some of the Rebels were dumb, but given enough firepower, they could take me out. But I adapted and made my way to the TIE Fighter. I hopped in and took off. 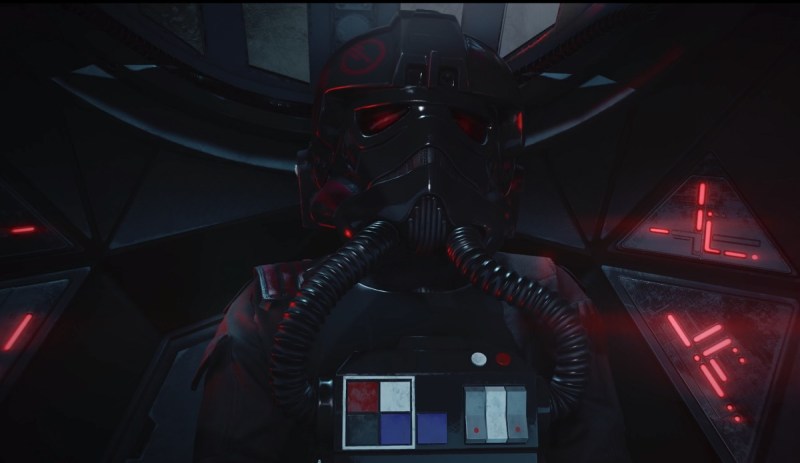 Above: Iden Versio in a TIE Fighter.

There, I found the debris of the Death Star and the Battle of Endor’s space brawl. The TIE Fighter was fun to fly. I had to get used to its ability to rotate so effortlessly. At first things went well. And then I started running into debris, destroying the fragile ship. I had been overconfident at first. But after a while, I started to get the hang of it, and then the dogfights started.

I had to intercept a bunch of starfighters that were headed toward the last remaining Imperial ship. Fortunately, amid all of the debris and enemy fighters, big red tags marked the enemy bombers that were after my capital ship. So I zeroed in on those and took them out as they made their straight-ahead runs. That was extremely easy. But then the starfighters started coming in larger numbers and took evasive action. So I had to bring out my old flight sim skills and chase them down.

Amid all of the wreckage, Versio tells her squad, “We adapt or die.” Nothing seems to get her down. And she buys the idea that the Empire is there to keep the peace in the galaxy, while the Rebels threaten chaos. 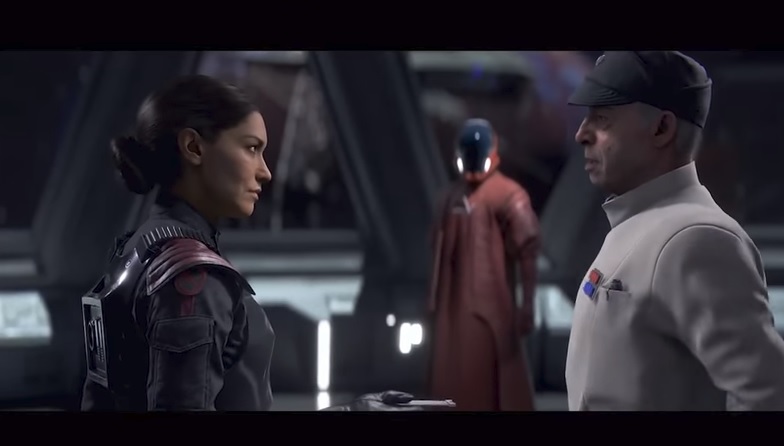 Above: The happy Versio family — not.

Versio rejoins her father on a capital ship as they make their escape. Versio’s team has to use their TIE Fighters to fend off a Rebel assault on the Dauntless, a big base that is critical to the Empire’s contingency plan. Versio has to fight Rebel starfighters and a big cruiser at the same time. The dogfight is pretty intense, as is a firefight that ensues aboard the ship. The action gets your heart pounding, particularly the last moment when Versio makes a narrow escape.

The conversations between characters are as intriguing as the action. Thompson said that it is always interesting, as we saw in The Force Awakens, when a stormtrooper takes off his or her helmet.

When Versio takes off her helmet, we see she is tough and hardened. But when she meets face-to-face with her father, Garrick Versio, we can see why she puts on that external armor. Her father is a die-hard devotee of the Emperor, who has just been killed above Endor. He pushes her to do her duty and to follow the final order of the Emperor, even though he’s dead. He also requires her to stand by and do nothing as he performs one last atrocity. We can see why she’s got Daddy issues. She reminds me of Luke Skywalker, trying hard not to fall under the spell of Darth Vader.

It might be my imagination, but Versio seems like a good person, trapped in an Imperial military family that has been brought up to show no mercy. You can see that in her facial expressions, as it looks like she’s barely holding back from exploding at her father as he executes what the Emperor has called Operation Cinder, which results in the destruction of their home planet.

The preview of the first few chapters put me in the shoes of an Imperial stooge, and I liked it. I’m looking forward to finding out the rest of Iden Versio’s story.