Those star wars aren’t going to win themselves.

Star Wars: Battlefront is out now for PlayStation 4, Xbox One, and PC, meaning that digital fights for galactic freedom are happening across the world. However, Battlefront can be a pretty complicated game with all of its special objectives, vehicles, and special characters.

That’s why we put these tips together. They’ll teach you some basic tricks that will help you in your battles far, far away. Walker Assault: Playing as a Rebel

Your goal is to keep uplink stations online, which in turn will cause more Y-wing bombers to keep the AT-ATs vulnerable for a longer amount of time. For a Rebel soldier, you’ll want to make sure you have the Ion Torpedo equipped. This missile locks onto vehicles and does extra damage against them. Not only does this help you hurt those AT-ATs, but it’ll help you take out AT-STs too.

However, don’t just let that ability sit idle while the AT-ATs’ are invulnerable and the AT-STs are absent. You can also use the Ion Torpedo to lock onto enemy aircraft. Sure, you might not hit them, but you can make them waste their maneuverability and escape cooldowns, making them vulnerable for your friendly ships.

For your other cooldown slot, you can’t go wrong with the versatile Jump Pack. Not only can it help you reach higher terrain, but you can use it to cover distances faster. It’s also great for escaping Orbital Strikes. Plus, it can help you reach those power-up, vehicle, and character tokens before your teammates. 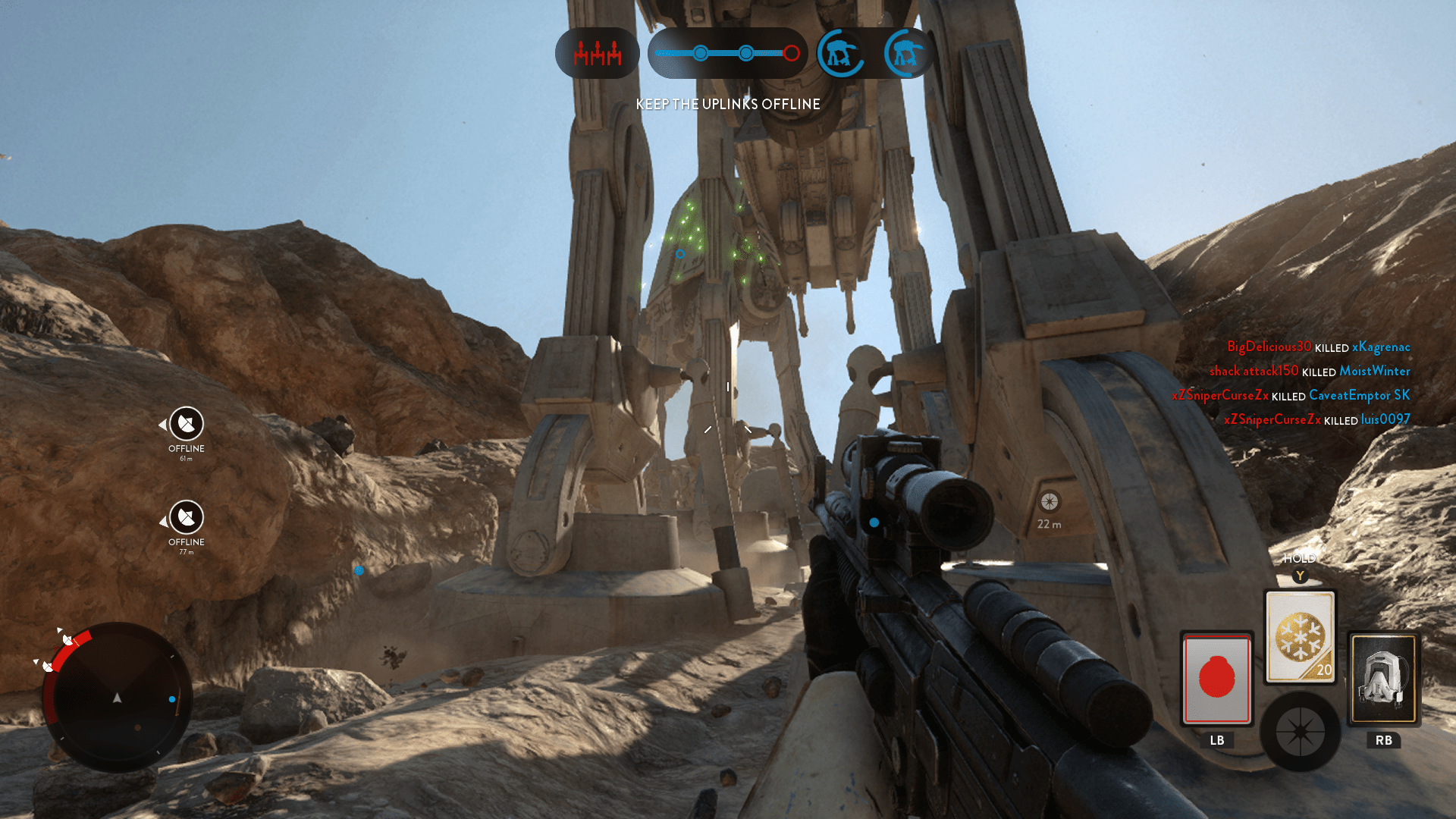 Above: Protect these things.

Walker Assault: Playing as an Imperial

As an Imperial, you’ll only win Walker Assault if you can keep the uplink stations down enough so that the Rebels don’t have enough time to deal serious damage to the AT-ATs. This is why you’ll want the Jump Pack. It’ll help you reach those stations faster and reduce the amount of time you spend running from your spawn point.

You won’t need the Ion Torpedo for most of the match, since the Rebels don’t have any ground vehicles. However, you’ll want to equip it before the last round of vulnerability for your AT-ATs. This is when the Rebels can take out one with a single Snowspeeder using a harpoon. However, you can lock onto those ships with an Ion Torpedo, hit them, and make them disengage their tow-cables.

Playing as an air vehicle

When you’re in the air, your instinct is to resort to dogfighting other airships. However, you can still help out your friends on the ground. Get some height, slow your boosters, and then aim toward the battlefield and looks for swarms of enemies. They’ll usually be hanging around the uplink stations. Use your blasters and missiles to take them out. You can also do a lot of damage against those AT-STs, which can relieve some of the pressure on your grounded friends.

Each ship has evasive maneuvers assigned to the D-pad and at least one defensive cooldown, like a burst of speed that will help you escape an enemy or an increase in shield power. Don’t get stingy with them. If an enemy is locking onto you, use them. It doesn’t take much for another ship to take you down, so don’t save those cooldowns for a rainy day.

When you’re the Rebels, you’ll gain access to the Snowspeeders in the last wave of Walker Assault. While these ships can take out an AT-AT with one harpoon, they are awful at fighting enemy aircraft. Unlike most ships, they lack homing missiles. Try to avoid the attention of enemy ships by flying around the edges of the map and waiting for the AT-ATs to become vulnerable. Then, fly toward them and prepare to attack. Don’t forget to use your jammer cooldown before engaging your tow-cable. This will make it impossible for enemy missiles to lock for a while.

If you need to practice your flying skills, play the Fighter Squadron mode. It’s just ships, so you’ll you don’t need to worry about hunting down tokens before you can take to the air. 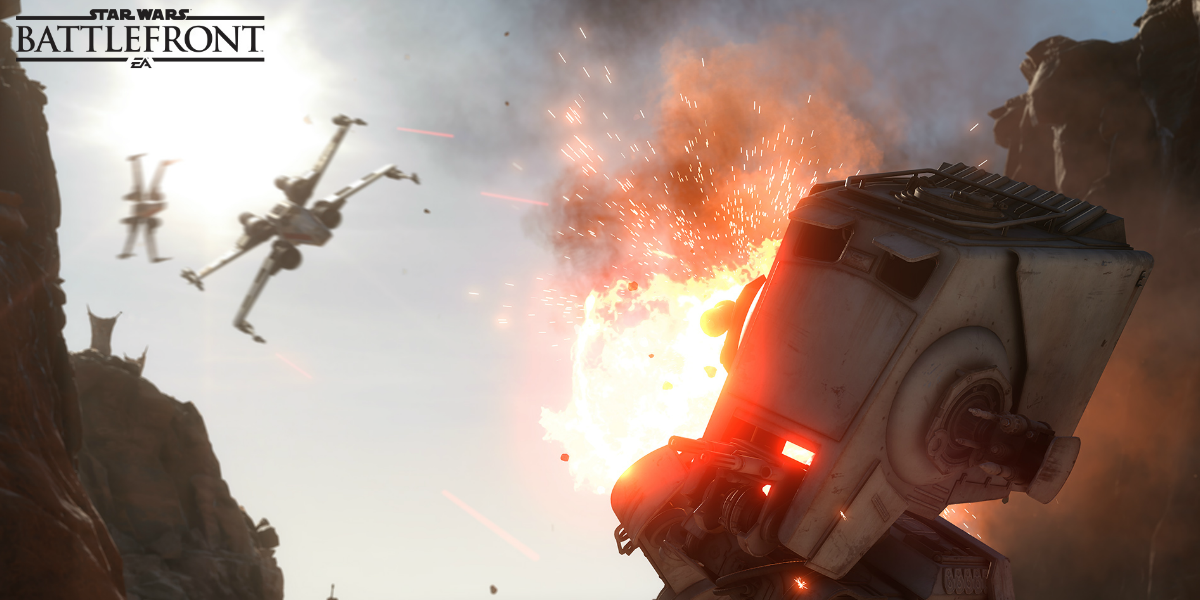 Above: Oh, gawd! Who thought bipedal armor was a good idea!

Playing as a ground vehicle

Inside an AT-AT, you can call down Orbital Strikes, but doing so requires you to wait for a long cooldown before you can use the ability again. You’re only in the AT-AT for a limited time. However, use the Orbital Strike as soon as you enter the vehicle, and you should have enough time to use the ability twice more. In other words, don’t hold onto the Orbital Strike waiting for that perfect moment when the entire team is standing in one spot. It probably won’t happen.

The AT-ST is powerful, but it’s also a big target. It’s weapons all have decent range, so don’t travel too closely to the enemy. If you’re standing right next to an uplink station, you aren’t long for whatever world you’re fighting on.