Electronic Arts reported better-than-expected results for its fourth fiscal quarter ended March 31, thanks to the strength of the Star Wars: Battlefront shooter game. EA’s results are closely watched as a bellwether for gaming because of its vast presence in Western markets. That sent the stock upward in after-hours trading.

“FY16 was a phenomenal year for Electronic Arts as we connected hundreds of millions of players to great new games, and helped them connect with each other through rich and dynamic live services,” said EA chief executive Andrew Wilson, in a statement. “The year ahead is packed with excitement. Fans are thrilled with the intense action and epic scale of Battlefield 1, our EA Sports titles will take major leaps in innovation, and we’ll bring new experiences from our most popular brands to more players on more devices.”

“We grew non-GAAP net revenue, profitability and cash flow to record highs,” said Blake Jorgensen, EA chief financial officer, in a statement. “Leveraging our great portfolio of brands and live services has enabled us to break records across our key financial metrics. We expect to drive strong revenue, earnings and cash flow growth into the future.”

EA’s stock rose 4.97 percent in after-hours trading to $68 a share. During the fiscal year, EA said that 55 percent, or $2.4 billion, was digital revenue. 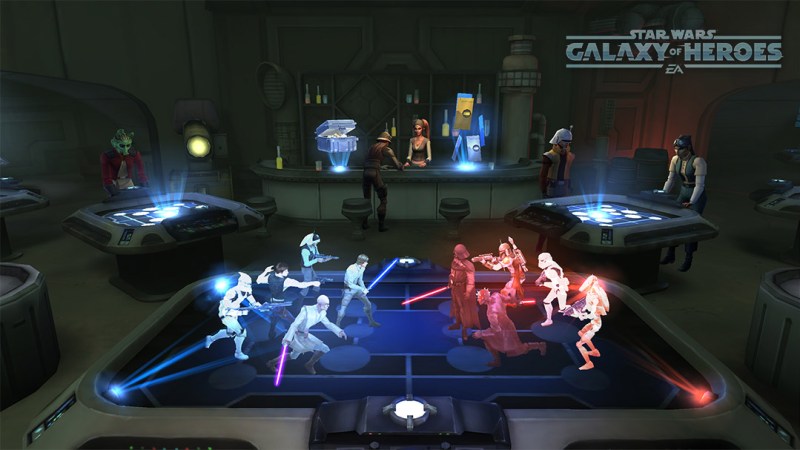 EA said its first-fiscal quarter revenue would be about $640 million, and it would report a loss per share of 5 cents.

Analysts expected 40 cents a share on revenues of $875 million for the first fiscal quarter ending June 30.

Michael Pachter, analyst at Wedbush Securities, wrote in a note before the call that EA likely recorded a million or 2 million preorders for Star Wars: Battlefront.

Analyst Colin Sebastian of RW Baird predicted that EA’s earnings would be slightly ahead of consensus, with a comparison to last year looking weak because the publisher didn’t have a corresponding release to last year’s Battlefield: Hardline game.

Verto Analytics reports that 28.9 million users accessed EA’s online services during March in the U.S. On average, EA users spend 9.7 hours a month connected to EA services, with the average session duration at 18.5 minutes — 17.5 million users used a PC, 10.2 million used a smartphone, and 5.9 million used a tablet. Top games on those platforms include The Sims, Bejeweled Blitz, and SimCity.

EA faces an interesting couple of quarters. It has pulled its booth from the Electronic Entertainment Expo (E3) tradeshow and opted to have a fan-oriented event on June 12. We expect EA to say a lot more about its slate for this year. EA has announced that Mirror’s Edge: Catalyst will debut on June 7, and its World War I-focused shooter Battlefield 1 will debut on October 21. The big question, Sebastian said, is whether Mass Effect: Andromeda falls within the fiscal year ending March 31, 2017. Pachter believes it will get delayed until the 2018 fiscal year.

In its press release, EA said it was the No. 1 publisher on the PlayStation 4 and Xbox One consoles in the West for the fiscal year. It also said it was the No.1 most-downloaded mobile game publisher in 2015, according to App Annie. More than 54 million players engaged with EA Sports titles during fiscal 2016, up 65 percent from last year.

In the fourth fiscal quarter, EA said it had 9.4 million players across its Battlefield titles. The Sims 4 player base grew by nearly two-thirds throughout the fiscal year, and The Sims Free Play on mobile reached 200 million lifetime installs. Madden NFL mobile monthly active players grew 30 percent in the fourth fiscal quarter compared to the same period a year ago.