Star Wars: Commander has been a success for Disney Interactive. It’s a top-10 strategy game in the App Store, it has seen more than 10 million downloads since its Aug. 21 debut, and it’s held a ranking as high as 32 for all games on the charts in Apple’s shop.

Mobile developer DeNA wants to re-create Commander’s magic with its next release, Star Wars: Galactic Defense for iOS and Android smartphones and tablets (it even works on an Apple TV). It’s a key free-to-play release for the Japanese publisher in a mobile gaming market that could hit $20 billion by the end of the year, and from what I saw earlier this week at its San Francisco office, it offers more than what you usually see from tower defense games.

Unlike Commander, Galactic Defense pulls in heroes and units from all six Star Wars movies and the The Clone Wars  (nothing from the latest animated series, Star Wars: Rebels, yet, though executive producer Kevin O’Neal would like to see the already popular show included in future updates). Also like Commander, it offers two campaigns — one featuring Light-side units (The Old Republic and Rebel Alliance) and one with the Dark side (Separatists, bounty hunters, and the Empire). The two games also share a similar, cartoony style.

While the two games share much in common, O’Neil says similar structures — like two sides — and visuals aren’t a mandate from Disney Interactive, which is now responsible for Star Wars after the House of Mouse acquired Lucasfilm and LucasArts in 2012. 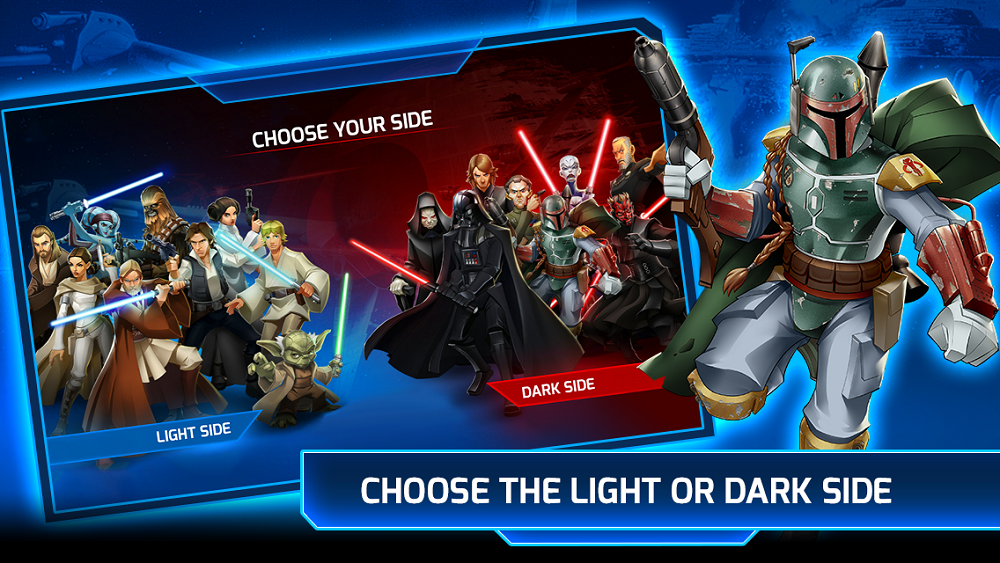 Above: You can play either the Light side or the Dark side in Star Wars: Galactic Defense.

“This wasn’t a mandate from [Disney]. We really pushed for it because we do want to appeal to players who like both sides,” said O’Neil on a video call from DeNA’s Santiago, Chile studio. “It gave us a lot more characters and content that we wouldn’t have had otherwise.”

You get your standard tower defense fare here: turrets you can buy, destroy, and upgrade; and abilities called Support Cards, which give you powerful orbital bombardments and other potentially game-changing abilities (though these have timers on them). While card games may be popular right now, O’Neil said they’re calling these cards as a “metaphor that makes sense” more because of the user-interface usage and not to piggyback on a popular trend.

It’s a free-to-play game with in-app purchases. You can play five missions before you run out of energy, and you must wait for it to refill (or get energy from the Facebook social component). Credits are the in-game currency, and these bag you Champions and Support Cards.

But DeNA’s take makes the strategy deeper. The towers don’t stick to just ranged and area-of-effect attacks. Melee towers disgorge foot soldiers (such as Rebel troopers armed with force pikes) that engage Stormtroopers. This seems like an easy way to get Jedi and Sith into combat with their lightsabers, and O’Neil confirms this was part of the idea behind it. But this also provides a path for troops such as the Emperor’s Royal Guard, the red-cloaked helmeted elite of the Empire, and their force pikes to get into battle as well. 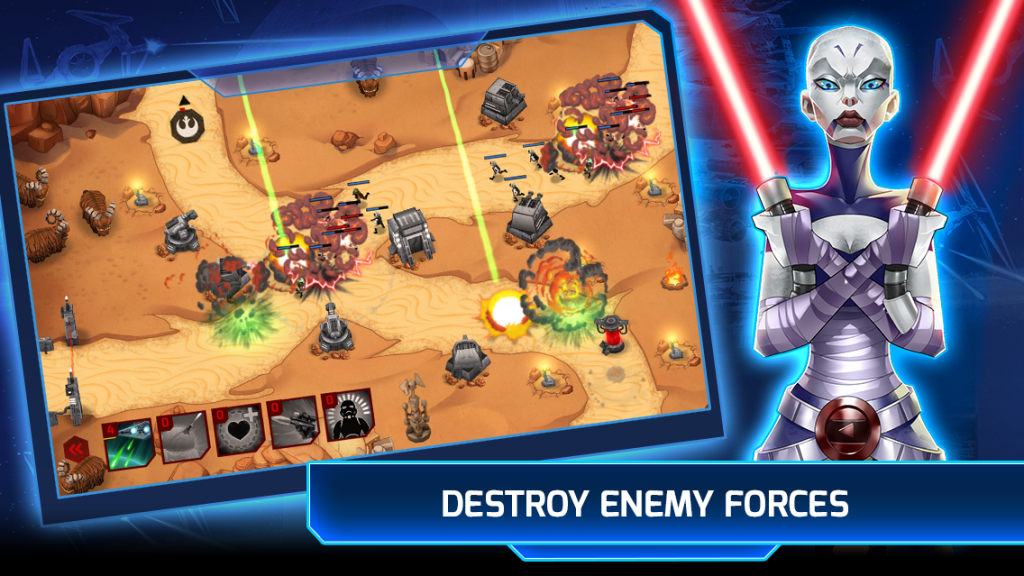 Above: I am … Sith. Of course you are, Asajj Ventress. The red lightsabers kinda tip you off.

We are the Champions

Champions are the most noteworthy twist in Galactic Defense. These aren’t just a good way to get the famous names from that galaxy far, far away into the action — it also gives you different ways to take on challenges. These powerful characters have special abilities: Luke Skywalker summons a seeker drone that stuns enemies, the bounty-huntin’ droid IG-88 sprays blaster fire in all directions, and Darth Vader uses the Force to hurl Rebels away from him.

You start with one Champion and add more as you level up. I played a later mission on Endor with three Dark side bounty hunters — IG-88, Boba Fett, and my favorite character from The Clone Wars, the spaghetti western-inspired Cad Bane. The Rebels swarmed me, coming from separate lanes (something I’d never seen in these kind of games), even though I could move these heavy hitters around the battlefield to deal with threats — a nice change from other tower defense games. O’Neil pointed out that DeNA made sure to have “synergies” for its Champions. Have three Jedi in play, and they boost each other’s abilities. This was supposed to work for my bounty hunters, but the Rebels crushed them anyway. Champions also earn Relics you can equip that improve their stats.

It even has some special nuggets for old-school Star Wars fans. Yes, I geeked out when I noticed that a toy I once had as a kid — one of the silly mini-rig vehicles that never appeared in the movies — rolled onto the screen as the Rebels were attacking the Empire’s positions on Hoth. As far as I can tell, the MLC-3 has never appeared in a game (it was in a comic book once; Lucasfilm can’t confirm if this is indeed its first in-game use), and I immediately pointed out this peculiar little artillery unit to O’Neil.

DeNA has experienced success with a number of games since jumping into the market in 2009. The strategy game Godus (from Peter Molyneux’s 22cans studio) ranked as high as No. 2 on Apple App Store. On the Android side, the card battler Hells Marys ranked 54 on the Google Play shop in August. Of its big-name mainstream brands, Transformers: Legends (another card game) ranked as high as 18th on the App Store. Transformers: Age of Extinction, an endless “combat” runner from DeNA subsidiary Mobage, hit a high of No. 11 on the Google Play Store. All of this info comes from market-research firm App Annie.

But Star Wars: Galactic Defense could blow all of those away. And even if it doesn’t, O’Neil is grateful to work on one of the world’s most beloved franchises.

“Everyone in the studio was super, super-excited,” O’Neil said, who’s working on his first game in Lucas’s former sandbox. “You don’t get the opportunity to work on something that’s this well known and this beloved. It was really exciting for us to have the chance to work on this, work with the Lucas and Disney folks, and try to do the lore justice.”