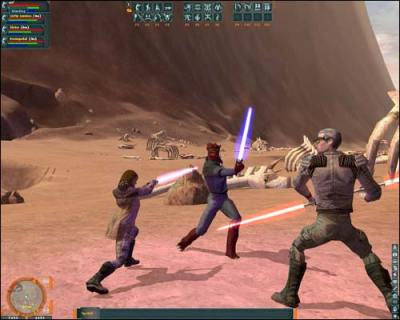 [Update: The petition has now gathered more than 2,100 signatures]

Enraged and frustrated players of Sony’s online Star Wars role-playing game, Star Wars Galaxies, have launched a petition to try to save the game from being shut down on December 15.

The petition has gathered more than 2,100 signatures in three days. It asks Sony to convert the game to a free-to-play game that is maintained through the sale of virtual goods. The petition also asks Sony to consolidate players onto a smaller number of servers and facilitate character transfer to reduce operational costs in order to keep the game running.

Other online games have had a lot of success converting from a subscription-based model to a free-to-play model. Revenue from Turbine’s Lord of the Rings Online doubled and its player base increased by 400 percent when the game went free to play in October. Revenue for the company’s first experiment in going free-to-play, Dungeons and Dragons Online, jumped by about 500 percent after the shift.

Here’s how the free-to-play, or “freemium”, model works: players are able to play online games with persistent worlds like Lord of the Rings Online for free, but must pay for additional perks like armor or becoming more powerful at a quicker pace. The freemium model isn’t necessarily new. Many successful smaller online games — like Maple Story — that have a smaller player base and might not be viable with a subscription model have used the freemium model.

I argued that the death of Star Wars Galaxies was basically a tragedy because it came at the hands of the game’s own publisher rather than the popularity of another game. World of Warcraft, currently the top online role-playing game, played a role in reducing the game’s total subscribers. But Sony’s updates were what inevitably killed it and drove away players. Star Wars Galaxies, which once boasted a unique progression system, trading and crafting features, was basically converted to a watered down version of World of Warcraft through a number of updates.

Here’s one post from a Star Wars Galaxies fan who is trying to promote the petition. It’s just one example of the ridiculously devoted community the game has constructed during its eight-year run.

We are not your typical gamers.

We are not a commodity.

But if you look at the recent decision by Lucasarts to shut down Star Wars Galaxies, you might be inclined to think we are both of those things. Lucasarts thinks that we are a non-perishable commodity that can be shoved into a shipping crate and moved down the road to their next project. That is not the case. Not even close.

We are a vibrant community. We have seen our ups and downs, but we are only stronger because of it. We have endured all manner of broken promises and misleading “improvements” to this game, and throughout all of it, we have continued to build our community, and show support and loyalty to this great game. But we didn’t do it because of a game. We did it because of our community here.

No matter how hard you try, you can never apply any sort of label or definition to the players of Star Wars Galaxies. Unfortunately, it seems like Lucasarts is doing just that by assuming we will simply shuffle over to their next product simply because it contains the words “Star Wars” in the title. But oh, that is so far from the truth. We are not your typical gamers, and we are not your typical Star Wars fans. In fact, both of those truths are the very things that make our community so strong.

The world is obsessed with trying to apply labels to groups of people, and will often do so on the basis of pure assumptions and hearsay. You can’t do that with Star Wars Galaxies players. We are not some geeky group of people who simply want to log into a video game and shoot battle droids and fly spaceships with laser guns.

Just the other day I learned that a great player on my server of Starsider was once the mayor-elect of his city in Canada. And what’s more, he was 18 years old. I have known a concert violinist, a fireman, a surgeon, a newspaper editor, an EMT, a helicopter pilot, and on and on and on. And all of these people I met through Star Wars Galaxies.

On top of all that, many Star Wars Galaxies players are active service military personnel. I remember once talking to a member of my guild and having him tell me he was logged into Star Wars Galaxies from his base in Iraq. Without a moment’s hesitation, I got his unit’s mailing address and sent him and his comrades a care package. Star Wars Galaxies made that connection possible.

So much happens because of Star Wars Galaxies that goes unnoticed. This is much more than a game to the people who play it. It’s our community. And a community is not a commodity, so don’t be surprised when we want nothing to do with the people who are trying to force us to give up our community just so they can make a few extra bucks.