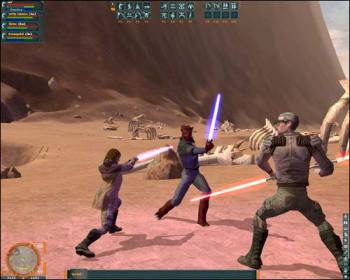 Star Wars Galaxies, one of the first online Star Wars games run by Sony Online Entertainment, will shut down December 15 — before the release of the highly anticipated online game Star Wars: The Old Republic.

Ever since the release of the incredibly popular World of Warcraft, Star Wars Galaxies has struggled to hold onto its subscribers. But the chief culprit in the death of this game is its own publisher. Sony has released several updates that have not been received well with fans.

I can’t say I’m surprised that the game is finally shutting down. I personally stopped playing as soon as the “New Game Enhancements” were released. Like other players, I was disappointed that Sony decided to drastically revamp the character classes and combat system to the point where it was quite similar to World of Warcraft. The New Game Enhancements update turned the game’s original character progression into a class-based system that featured nine archetypes like a combat medic and a close-quarters fighting Jedi.

I spent a fair bit of time building up my character when the game first came out. It was a lethal combination of a warrior-monk that could also heal and buff everyone around him. That character would go on to become a Jedi — and it was always fun to watch everyone else stand in awe when I pulled out a lightsaber for the first time (of course, I was subsequently murdered by a bounty hunter for having the gall to whip it out in public.) Like other online games at the time, World of Warcraft stole a lot of the game’s subscriber base. But Star Wars Galaxies still held onto a core population of gamers who enjoyed its skill progression — myself included.

Star Wars Galaxies was successful because it was unlike other MMO games at the time. Players could master several classes at once and create characters who suited themselves. You could create a doctor who was a deadly sniper, or a fighting monk who could also build starships. It was also extremely difficult to unlock the Jedi class, but very rewarding.

The game let you really be whatever you wanted to be. You could go out and build a city, and become a politician and eventually mayor of that city. You could become a well-known ship architect and produce starships for some of the best pilots in the game. You could fly into space in a single ship and take down a massive star cruiser — if you were good enough. Or you could spend your time hunting down Jedi scum and picking them off from a hundred yards away with a blaster rifle.

Almost all the magic disappeared with the “New Game Enhancements.”

The problem with the move to World of Warcraft-style gameplay was that there was already a World of Warcraft. Even with a Star Wars skin on top of it, Star Wars Galaxies was not polished enough to hold onto its core subscribers. The company shuttered twelve of the game’s servers in 2009. I took a chance to explore the game one more time recently before the recent PlayStation Network outage and found the cities in the game to be completely desolate. They once buzzed with doctors handing out buffs and hundreds of people clustered around auction terminals.

The Old Republic, another online Star Wars game due out soon, will aim to unseat World of Warcraft from the top of the MMO universe — though reaching that goal seems unlikely. It also came out in 2003 — and its age really does show.

It feels like a little piece of my childhood will disappear along with that galaxy far, far away. But what happened with Star Wars Galaxies should serve as a pretty clear lesson to the rest of the online gaming industry.