Disney wants you to be immersed in Star Wars this fall as The Last Jedi film comes out in December. And one of the ways it is doing that is with Star Wars: Jedi Challenges, an augmented reality headset that makes you feel like a Jedi.

I tried out Jedi Challenges in a hands-on demo, and it worked better than I thought it would. It wasn’t a purely gimmicky experience, the way that many AR demos feel. The product debuted on November 3 in Best Buy Stores and the Lenovo website. Disney is heavily advertising it on TV. The headset isn’t cheap at $200, so it’s an expensive toy for the Star Wars kid in all of us.

Lenovo makes the headset, and Disney designed the AR experiences, combining both animated software with brand new hardware, said Mike Goslin, the vice president of development at Disney Consumer Products and Interactive Media, in an interview with GamesBeat. He said the team pulled together a mix of game designers, theme park creators, and AR experts to build the device over the past two years.

“We didn’t find a device out there that was a perfect fit, so we chose to create our own,” Goslin said. “We felt that AR was a great way to deliver the visuals. We wanted it to be immersive, but mass market. It had to be affordable and comfortable.” 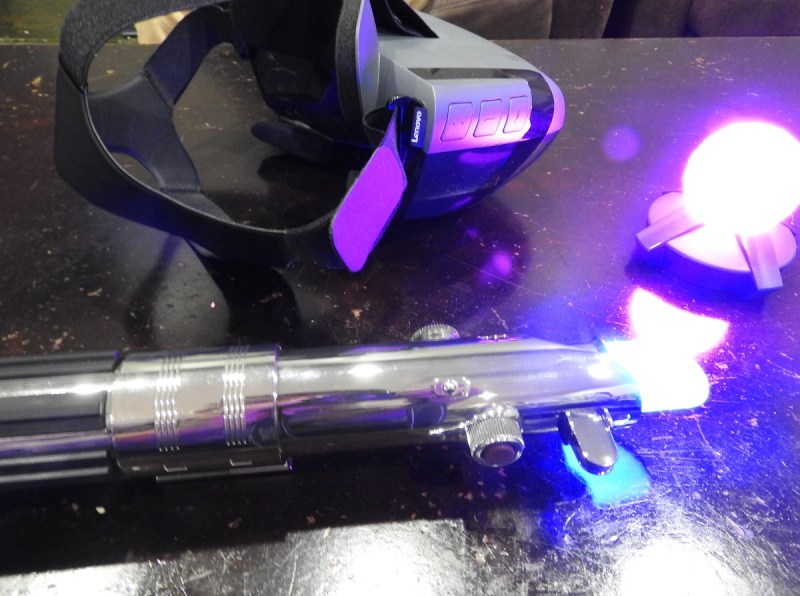 The device is a lot more affordable than it might have been because it uses your smartphone as a screen. But when you slide your iPhone or Android phone into the headset, it is flipped up, and a mirror captures the images for your eyes. This way, you can see the animated imagery as well as the real world in front of you. The device blends both together.

You can see the real world as it is, so there is no lag as you have in other devices that use a camera to show you the real world. The focal depth is beyond a meter, so you see a clearer image. The device isn’t tethered, and it is activated by a mobile app. You put a glowing pink ball on the ground to capture your movements.

You hold the handle of a Jedi lightsaber in your hands. It glows blue, and when you look at the screen, you see a virtual lightsaber beam extending from the physical handle. The handle has a haptic motor for force feedback, and it has tracking built into it. The tracking has a range of three meters, and it is low latency, meaning it can capture your movements accurately. In augmented reality, you can see menus with different characters. You choose one and select a mission and a bad guy to fight. The mission loads, and you have to duel with the virtual character who is fighting with you. You can earn Force powers and adapt to new styles.

You can fight opponents on six planets, and each one has three different villains to challenge. When you fight Darth Vader, you have to move out of the way of his attacks. (So yes, you need to make sure you won’t run into anything. Thankfully, with AR, you can see what is around you.) I fought against a couple of different characters. One of them was relatively easy to beat. She sliced at me, and I detected where she was going to strike me with the Force.

So I had to simply line up my hand with the line running across my screen. If I lined it up, I blocked the attack. Then I could swing at my opponent and do damage. Once I did that enough times, I took her down. But the next opponent wasn’t so easy: Darth Maul. He swung his twin-blade lightsaber at me, and I had to block him twice. I had to move faster and get out of the way of his attacks. Then I had to move more quickly to get a stab in on him. In my first battle, he took me down though it was close.

Overall, it was a fun experience, and those watching me could get an idea of what was going on by looking at the goggles. But they had to make sure they stayed far enough away from me as I swung the physical lightsaber handle. I think Disney was smart not to put the whole blade in physical form as that would have made it much more dangerous to those around you.

On Android, the headset works with a Samsung Galaxy 7 and up. There are plans to add more content as Disney simply has to update the mobile app to do so. You can expect that there will be some new updated content around December 15 as Star Wars Episode VIII: The Last Jedi debuts in theaters.

Goslin said the team is happy with the result. “We saw nothing else out there, and so we took the opportunity to lead. The potential of AR is tremendous. This is wish-fulfillment at its best.”

The headset isn’t made only for Star Wars content, and that is intentional, Goslin said.