Seeing the radical resistance fighter was a nice surprise for hardcore Star Wars fans. But it makes sense considering the game’s premise. Fallen Order (coming to PlayStation 4, Xbox One, and PC on November 15) takes place a few years after the Empire killed most of the Jedi during the infamous Order 66.

You play as Cal Kestis, a Jedi Padawan who managed to escape the slaughter. After years of hiding, Cal is trying to complete his Force training while also looking for a way to restore the Jedi Order. And along the way, he’ll meet familiar faces like Saw Gerrera. In the demo, Cal helps out the grizzled soldier during a mission on the Wookiee homeworld Kashyyyk.

While we don’t know the extent of Saw’s involvement in the game, his cameo serves as a bridge between two important eras in the Star Wars saga: the events covered in The Clone Wars animated series and in the Star Wars: Rebels cartoon, both of which occur before the original trilogy. Both EA and Lucasfilm declined to comment on where Jedi Fallen Order fits in the timeline.

The tragic story of Saw Gerrera spans multiple forms of Star Wars media, including books and films. He’s best known from his big screen debut in Rogue One: A Star Wars Story, but his history with the franchise goes back much further.

Saw first appeared as a minor character in The Clone Wars, fighting against the Separatist occupation on his home planet of Onderon. With the help of Obi-Wan Kenobi, Anakin Skywalker, and Ahsoka Tano, Saw’s local resistance group succeeds, but not before losing their leader (and Saw’s sister). Steela Gerrera.

The death of Steela — along with other tough losses throughout his life as he continued to fight the Empire — hardens Saw, to the point where he is nearly unrecognizable in Rogue One. At that part in the timeline, the Rebel Alliance wants nothing to do with the veteran fighter, viewing his actions as too violent and extremist. That sharp divide is evident during Saw’s appearances on Rebels, especially in regard to his adversarial relationship with the Alliance. 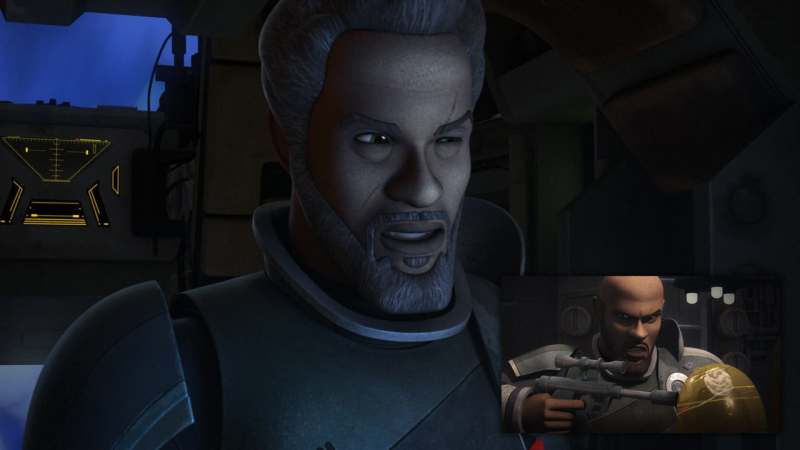 Above: Saw appears in two episodes of Star Wars: Rebels.

While Saw ultimately helped the Rebels in both Rogue One and in the Rebels cartoon, his presence served as a cautionary tale for the main characters, showing what might happen if you let your hate for the Empire consume you as he did. Creative executive and Lucasfilm Story Group member Pablo Hidalgo put it best when he described Saw as a “broken” man.

It’s difficult to say which version of Saw is in Fallen Order (when reached for comment, EA declined to clarify). But based on his brief appearance in the new gameplay footage, it seems that Saw is closer in age to his cameo in Rebels, which takes place before Rogue One (in the movie, he has much longer hair and has to rely on a breathing machine to survive).

In an extended hands-off demo at E3, we found out a little more about what both Saw and Cal are up to on Kashyyyk. Saw’s soldiers are trying to disrupt the Empire’s supply lines, while Cal and his crew are looking for an old Wookiee chieftain named Tarfful (he and Chewbacca were the Wookiees who escorted Yoda to his escape ship on after Order 66). Saw tells the budding Jedi that no one has seen Tarfful in a long time.

The two decide to work together. Shortly after that, Cere Junda (a former Jedi Knight and mentor to Cal) warns him about trusting Saw — indicating that she is well-aware of the resistance fighter’s controversial history. The characters eventually learn that the Empire is refining the local tree sap into some kind of powerful compound. As Saw and his team look into destroying these refineries, he asks Cal to help free the imprisoned Wookiees.

The demo ended with another Rogue One connection when a big security droid (similar in size and model to K-2SO from the movie) starts fighting Cal. 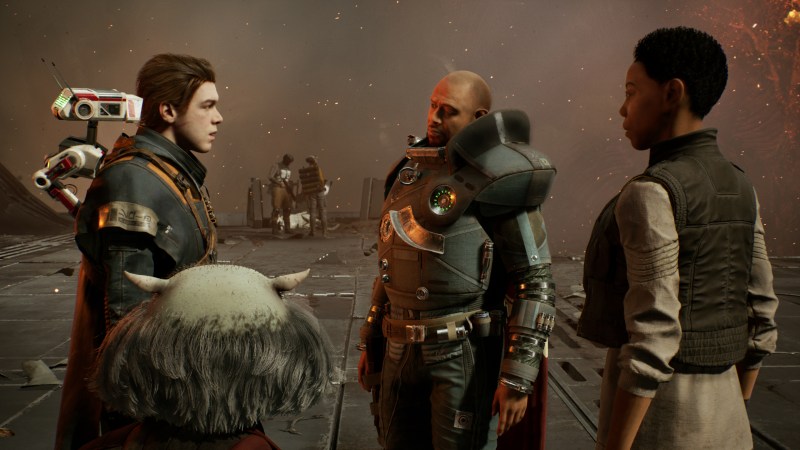 Above: Saw meets with Cal’s team on Kashyyyk.

Overall, the 25-minute presentation didn’t offer many clues about where this particular story beat was heading. But if Saw’s past roles are any indication, he might once again serve as a reminder of the the harsh lengths that some people will go to in the name of justice and retribution.

Cal Kestis, like Rebels hero Ezra Bridger, is a young Jedi trying to come to terms with his powers, and I can easily see a scenario where he might be influenced by a confident leader like Saw Gerrera, becoming a believer in his cause before finding out just how brutal Saw’s tactics can be. Alternatively, Saw could merely be a plot device, a way to give the player more things to do on Kashyyyk.

But in an era where all new Star Wars stories in books, games, comics, TV shows, and movies are officially part of the canon, I’d hope that his role in Fallen Order would be much more significant than that.