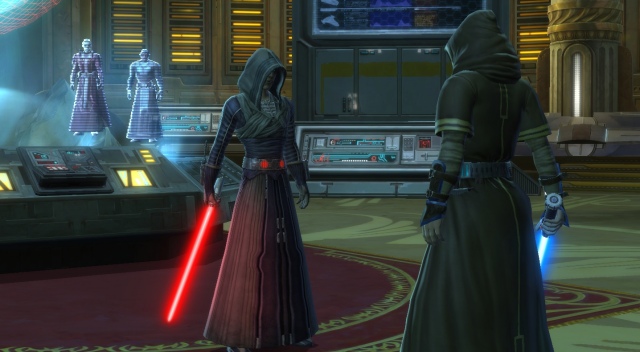 Players seem to enjoy Star Wars: The Old Republic – once they can get on a server, that is. Yesterday the new massively multiplayer online game by Electronic Arts finally launched after a one-week early access period for pre-order customers. The influx of new Jedis, Bounty Hunters and Sith Lords resulted in waiting times between a few minutes and more than an hour on about half of the 130 North American game servers. Players enter a queue if their server is at capacity.

New players can avoid waiting times altogether by selecting a low population home for their freshly minted Star Wars hero. Electronic Arts has been ramping up the amount of game worlds quickly. Even during the busy evening hours on launch day, we were able to find several East and West coast servers with only a light load. But to play together with friends, game characters must reside on the same server, which is why the more heavily frequented destinations tend to attract even more players.

BioWare senior online community manager Stephen Reid acknowledged the issue and posted a list of the servers with the worst waiting times. The queue problem won’t go away overnight, but the development team is working on a transfer option for moving game characters over to low population servers: “The ability to transfer your characters is being worked on, but there is no ETA on when it will be available.”, says Reid.

Electronic Arts must be pleased that the high popularity of The Old Republic was the biggest of its opening day issues. There were no major problems besides the waiting queues to report, in contrast to the bumpy launch of online shooter Battlefield 3 in October. The Old Republic has been well received so far, earning a 89 out of 100 score in our review of the early experience.

How do the server queues affect your playing habits? Are you patiently waiting in line or instead creating a new character on a low population galaxy far, far away?