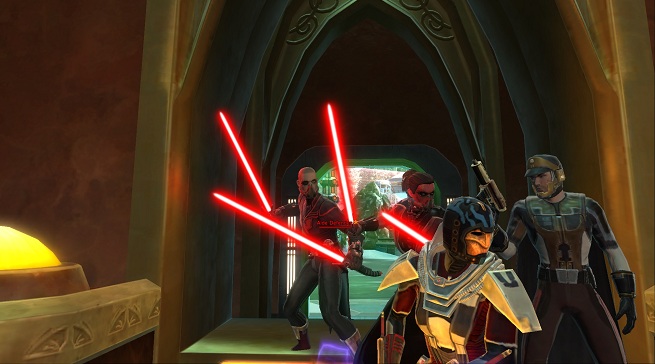 BioWare, a division of Electronic Arts, announced today plans to implement free-to-play and a microtransaction system within its massively multiplayer game Star Wars: The Old Republic, a move predicted by many gamers as a necessary step by the developer to stave off dwindling subscription numbers.

Free players can level characters to 50, the current level cap, “with some restrictions,” according to BioWare’s press release. A subscription option will remain available.

[Update: EA said on its analyst conference call that the number of subscribers for Star Wars has fallen from 1.3 million last quarter to less than 1 million in the first fiscal quarter ended June 30. That explains why the company is shifting to free-to-play.]

BioWare additionally revealed plans for instituting in-game microtransaction purchases via Cartel Coins, a new type of currency fueling a Cartel Market providing cosmetic and customizable gear — because getting in between a Hutt and his credits never ends well.

“Since launch, we’ve been listening to feedback from our fans, adding new content, and refining The Old Republic at a breakneck pace,” BioWare executive producer Jeff Hickman said. “We believe we’re in a position to help improve the service even more, not only by continuing to add new content, but also by expanding the game to many more Star Wars fans, increasing the populations on worlds and the vibrancy of the community.”

BioWare updated The Old Republic’s website with a comparative list of content available for both free and subscribed players. Here’s a rundown of both account types and what to expect, yanked directly from the press release:

A few sampled items available for purchase in the Market include a chittering Kowakian Monkey Lizard pet of Return of the Jedi fame, a Sith Meditation Throne (no, it’s not a toilet), and the Lost Helm of Darth Nihilus, a relic from Obsidian Entertainment’s Knights of the Old Republic II.

Star Wars: The Old Republic launched on December 20, 2011 for the PC platform. Padded by an enormous development budget and the equally enormous Star Wars license, Old Republic Force-gripped over 1 million players into a galaxy far, far away within its first three days. Nevertheless, server consolidations and a taciturn BioWare — further aggravated by layoffs and the departure of previous executive producer Rich Vogel — etched concern across the community eager for more content and new faces to stab lightsabers into.

Although Old Republic’s numbers have noticeably dipped since its strong launch, free-to-play could very well offer an enormous boost in both player count and confidence for BioWare and EA. What do you think?