Starlink: Battle for Atlas is a significant step forward for the toys-to-life movement. This petered out after Disney killed Infinity and Activision didn’t make plastic figures for Skylanders in its last go. And that’s fine. The games were OK, but those action figures lacked one key ingredient: action. They were stuck on plastic bases, and you couldn’t pose them.

That’s not a problem with Starlink’s spaceships. You can zoom them around the room without any silly bases, and even more, you can switch out different pilots, weapons, and even wings on the dang things. My kids had a blast just flying around and pretending to engage in space battles and swapping out different configurations.

Turns out the game is kinda fun as well.

Starlink: Battle for Atlas is from Ubisoft’s Toronto studio and hits retail October 16 for the Nintendo Switch. GamesBeat didn’t get the game until Friday, so I didn’t have time to do a proper review. These are my impressions after four days and nights with Starlink and its starships, and my kids going nuts for these fun toys.

Toys that are fun outside the game

My kids did have some enjoyment with the figures from Disney Infinity, but their interest was limited once they wanted figures they could pose, just like their Star Wars and Transformers toys. So now, they’re more decorations in my living room than they are toys that see playtime.

I don’t think that’s happening with these Starlink ships any time soon. Heck, even I enjoy flying these things around with them, engaging in imaginary space battles, racing from the living room and down the hall to their bedrooms, and going into the repair bay (aka the coffee table in our living room) to switch out weapons and wings. If you have two of three ships and a couple of sets of weapons, you have more than just two or three ships — you have a number of different configurations. I enjoy taking the wings from Fox McCloud’s Arwing and putting them on Judge’s Neptune ship, giving this tank of a fighter a different appearance. I didn’t notice if it made the ship any more nimble in the game, but that could be for a variety of reasons.

Starlink takes place in space and on planets, and while I’d prefer focusing just on combat and exploring in the stars, I did enjoy flying around planets.

Missions take place on these worlds, but as you zoom around, you can fight enemies, find loot to plunder, and scan native lifeforms. My youngest dug this — you scan a creature, fly around it in a circle to finish getting the info, and then see how much you learned. You often must scan two or three individuals of a species before you learn enough to learn what it is.

These planets also have some old tech lying around behind massive gates, and you must solve a basic puzzle. The “door” on these will have specific colors that match your weapons. A gate with red and blue means you need to fire your flame and frost weapons at it to open it and get the loot. They’re basic puzzles, but look at them from a child’s point-of-view — once my kids figured out that the colors matched weapons, they felt like they were the smartest people in the room. 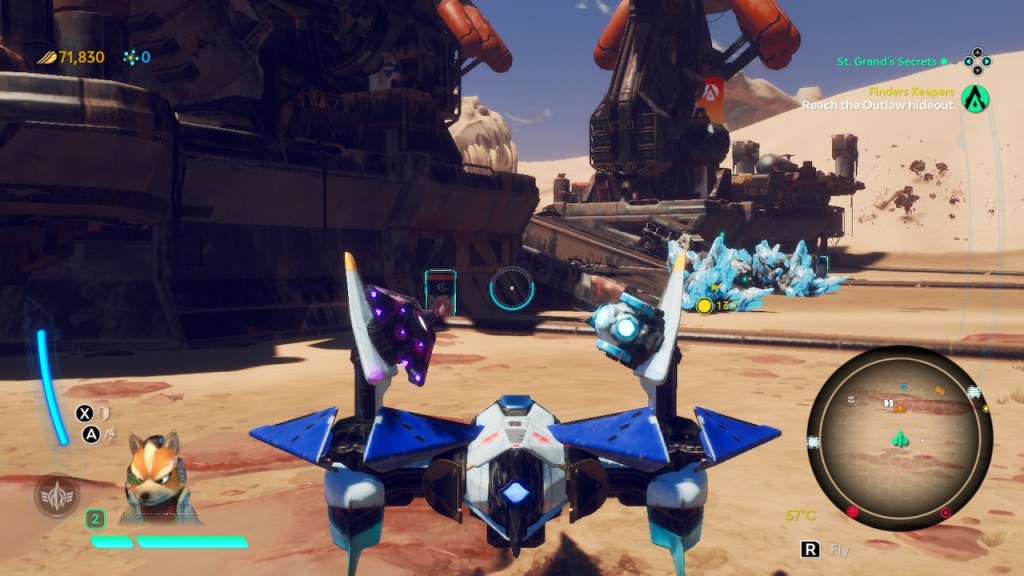 Above: This Arwing has wings from the Neptune as well as its own, along with a pair of weapons.

You get to play engineer on your starfighters, both in the game and in your living room (or wherever you’re playing).

In the game, you find items that can improve your ship and weapons’ capabilities (some locked behind the puzzles I mention above). These mods can give you more armor, boost your speed, make your weapons stronger, and more.

You can also swap out weapons as you play. Sometimes, you might need different guns or missiles to take advantage of the elemental weaknesses of your foes. When you remove a weapon, the action pauses and takes you to the equipment screen, where you can then put a new weapon on the open slot. My youngest son decided he was the “weapons master” and put himself in charge of swapping guns and missile launchers in-and-out. I enjoyed this because not only did his help free up my hands, but it also made it feel like we were playing together.

Swapping out wings is more about following “the rule of cool” than it is improving your ships. Seeing different configurations come to live onscreen is just fun. This reminds me of “kitbashing” you see from Star Trek and other sci-fi franchises with models — you take parts of two or more ships and “bash” them together to see what you get (this is how a number of Trek ships got their appearances in the TV shows). It also brings the Uglies to mind — starfigthers in Star Wars cobbled together from salvaged parts (think the X-TIE, an X-wing with TIE wings; or the TYE-Wing,” which combos a TIE fighter pod with a Y-wing’s engines, making one of the worst starfigthers ever to take to space — and giving it the nickname “Die-wing”).

Starlink is now Ubisoft and Nintendo’s second partnership, and this one looks like another success. The campaign stands alone, but the addition of Fox McCloud and friends adds the Nintendo flair to this space story. The Arwing is a great ship, and it doesn’t even need the snap-on weapons — it comes with lasers. And you can call in help from your squadmates as well.

Do they fit with the story? Sort of. Ubisoft is taking an interesting approach to how Fox and Friends (the good one) fit into Starlink, and I like seeing how this partnership is working. 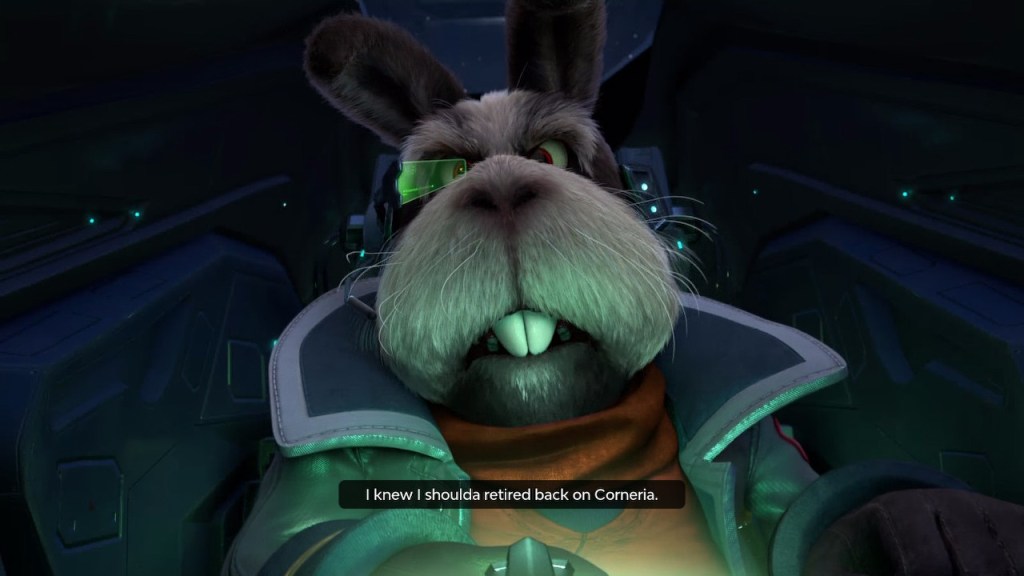 Above: Peppy is as grumpy and cautious as ever.

I don’t understand why you can’t charge into battle with your shields up. You have to hit the button during combat to receive any protection. I’d much rather have a way to have these things up without hitting a button, just as if I were strapping into the cockpit of an X-wing in every Star Wars space game known to humanity. This decision makes no sense, and considering Starlink is looking at a younger audience, I feel it’s an awful design decision.

Look, if I’m flying around in space, I don’t want no stinkin’ fire or ice weapons. Give me some frickin’ laser beams! Ubisoft did send a variety of weapons, like a missile launcher with ordinance that levitates its target, rockets that create an implosion, and even rams. StarFox’s Arwing has lasers, but none of the other ships I received had stock weapons. And none of the weapons felt as reliable and useful as basic lasers. Besides, shooting a flamethrower in space just feels … wrong.

Yes, you have to “jump” around to accomplish tasks. In a starfighter. With warp engines. And jets. That can hover. Yeah, I’m not a fan of it, either.

For some puzzles, you need to carry objects such as power conduits with your grabber beam to activate ancient motors and whatnot. But these conduits are too heavy for you to tote around while flying around. So you are stuck in ground-hover mode. But thanks to boost and some well-placed ramps, you can get these conduits up high on structures and other brick-a-brac by speeding over the ramps and jumping at the end.

It’s like if Luke’s landspeeder in Star Wars had to jump to get to the Junland Wastes to find R2-D2. Yeah, it’s a bad of an idea as it sounds. It just doesn’t fit what starfighters should do. Now, if they made your pilots do this while running around during planet exploration, I could buy that.

But making a starfighter platform? I’d rather fly a Die-wing.

Starlink: Battle for Atlas shows that the idea behind toys-to-life isn’t bad, it’s just that the action figures other companies made in the first wave just weren’t as fun to play with. Starlink’s fighters are fun, whether you’re playing with them in game mode or just racing around the living room and dogfighting with your kids or friends.

The video game portion shows some promise, with fun exploration and lots of fights on the ground or in space. Swapping out parts on the fly is fun, and so far, my kids and I are enjoying learning more about the planets in the Atlas system.

It’s not a starfigter game in the line of X-Wing or Colony Wars that I’ve longed for on modern consoles, but it’s fun, and it has potential. I just wish its controls were a bit more user-friendly.

Starlink: Battle for Atlas comes out October 16 for the Nintendo Switch. Ubisoft sent GamesBeat a set of five pilots, four ships, and a variety of weapons along with a digital copy of the game for the purposes of this review.