Most undead games try to hook you with the number of zombies you can shoot in a minute. But Microsoft’s upcoming State of Decay 2 is different. It fully simulates the world and makes you worry about whether your community has stolen enough Twinkies from the local supermarket.

I got a demo of the game at the Electronic Entertainment Expo (E3), the big game event in Los Angeles last week. Jeff Strain, founder of Seattle-based developer Undead Labs, and Richard Foge, design director, led a hands-off session where they described how the game works.

Other games haven’t captured the full survival fantasy of what it means to live on a day-to-day basis in a post-apocalyptic world, Strain said. In this case, you don’t play as a single hero. You have to make decisions as the leader of a community within a larger open world full of zombies. 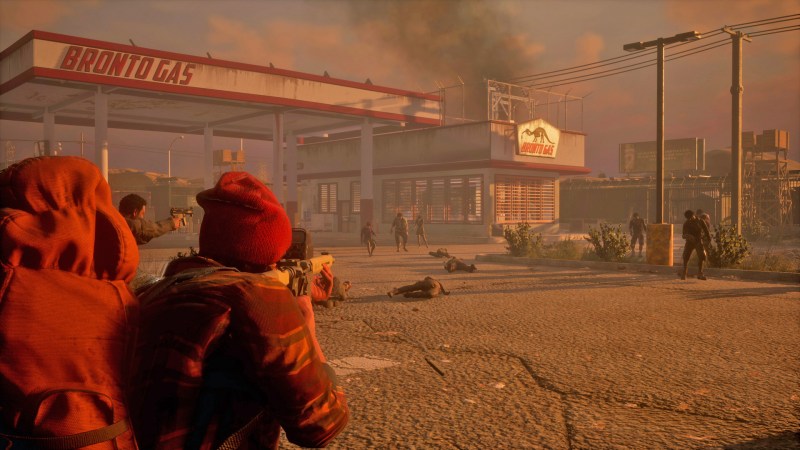 Above: State of Decay 2 fight.

“We wanted to create a game that allows you to play the fantasy out,” said Strain in a small group briefing. “We have all of the systems put together to model the apocalypse.”

It seems simple enough. If you see a zombie, you shoot it in another game. But in State of Decay 2, there are consequences. If you shoot a zombie, you make noise. That will draw other zombies. They will eventually lay siege to your home base, and if they kill any of your community members, that’s it for them. They don’t come back. 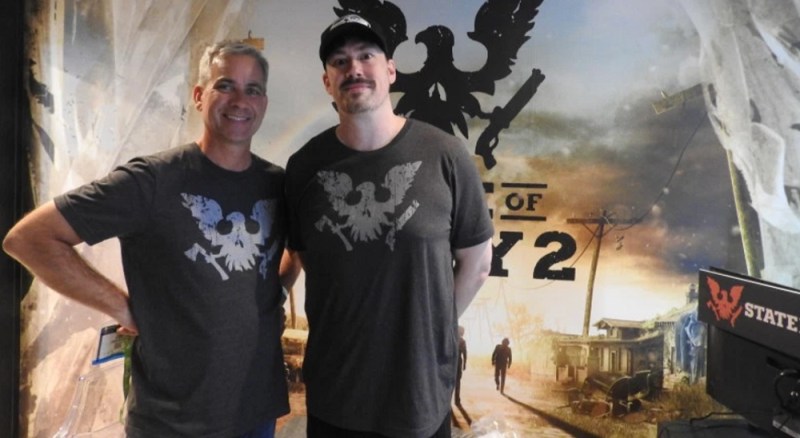 Above: State of Decay 2 developers Jeff Strain (left) and Richard Foge are creating a simulation of a post-apocalyptic world.

Strain showed the consequence of what would happen if you choose to save a survivor, Tiffany. She is a unique individual with a number of traits.  For instance, she has never been sick, and she’s a groundskeeper. She knows how to tend to a garden. That means she is valuable to a community, as she can create crops for people to eat. With her, the community can raise and consume food without having to leave a base.

But to be able to grow food, you need seeds. So, Strain took his community’s tough guy, Matt, out on a foraging mission. He asked for help by firing a flare, which is the way that players can request co-op help from another human player. A human player showed up, and Matt set out on his mission. They didn’t take Tiffany because they didn’t want to lose her gardening skills in case they were attacked.

Above: State of Decay 2 is coming next year.

They went out to a garden supply store in a car. While speeding to their location, they opened the car doors to smash zombies that they passed by since that doesn’t result in damage to the car. They picked up the seeds in the garden store, and then, they stopped at the police station. They picked up weapons and ammo, but the place was pretty well picked over. And they got attacked. So, they started firing back and had to leave the station in a car.

“You put yourself at risk by going out, and you have to make sure the cost of building the farm does not outweigh the benefits,” Foge said.

The zombies pursued them back to the base. There, they patched up the walls and started shooting at the attacking undead. Hordes of zombies came. Fortunately, the base had a lot of ammo. Wave after wave arrived, including some boss zombies that were tougher to kill. 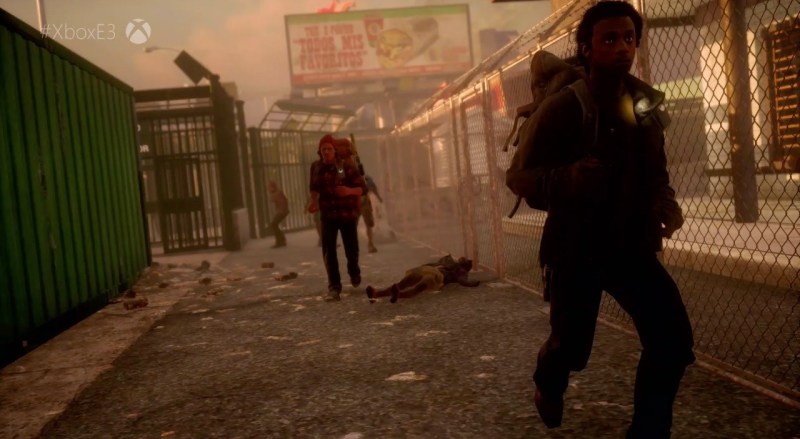 Above: State of Decay 2.

Matt was skillful at killing the zombies, but he had to resort to hitting the zombies with clubs. That put a strain on his stamina. If your stamina drops, it recharges more slowly. And if you are overwhelmed, you get more tired, and the zombies eventually take you down. Everybody survived the attack, but it was pretty tough. After it was over, the co-op player left with rewards for helping out.