The Steam Controller is perfect for Bomberman.

The application programming interface (API) — which enables the Steam Controller to talk to the computer — supports 16 simultaneous connections. That means one game could have 16 people all playing at the same time on one machine.

Valve is holding its Steam Dev Days conference in Seattle today and tomorrow, and the company is working with developers and publishers to help make them better aware of some of the company’s newest products. That includes the Linux-based SteamOS operating system, the console-like Steam Machine PCs, and the new Steam Controller input devices.

One attendee reported that the room of developers erupted into applause when they found that they could have 16 controllers working with one game. We could see developers do some wild stuff with this functionality, or maybe we’ll get a new Bomberman game without having to purchase the add-on that enables you to plug in eight Super Nintendo controllers at once. 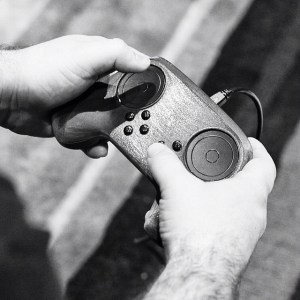 Above: A 3D-printed prototype of the latest Steam Controller design.

Valve also revealed a new version of the controller. It no longer has a center touchscreen, and the designers moved the buttons into a more familiar configuration. The interface device still has the concave touchpads on each side instead of analog sticks, but now it also has buttons arranged in a cross formation similar to the directional and face buttons of a DualShock or Xbox joystick.

We’ve reached out to Valve to ask why it is making these changes. We’ll update this post with any new information.

The Steam Controller’s creators are also taking virtual reality — things like Oculus VR‘s head-mounted 3D display — into account for the gamepad’s layout. They want to make the device work with mouse and keyboard-driven games, but they always want to make something that is a bit future-proof. On that front, the stick does not read biometric information from the player. That means it won’t pay attention to your heart rate or body temperature, which is something that Valve has talked about doing in the past. Valve thinks that info is important for interactive gaming, but it points out that hands are not a great place to get that data.

Finally, the final version of the device will use AA batters. Gamers can buy it from Steam or at major retailers. Valve will also likely make more changes to the Steam Controller as it continues testing it.