New game ideas often come from strange sources. SteamWorld Heist, for instance, started with an ongoing lunch-break argument among X-COM fans over whether a turn-based strategy game could work in 2D.

I recently got to try out the quirky space-piracy game — the sort-of sequel to the award-winning platformer SteamWorld Dig — at the EGX gaming show in Birmingham, U.K., and I can happily report that the answer is “yes.”

While there, I also got a chance to chat to Swedish developer Image & Form‘s convivial “glorious leader” Brjann Sigurgeirsson, who told me a little more about the birth of SteamWorld Heist, his love for the Nintendo 3DS community, and why he’s stopped promising release dates. 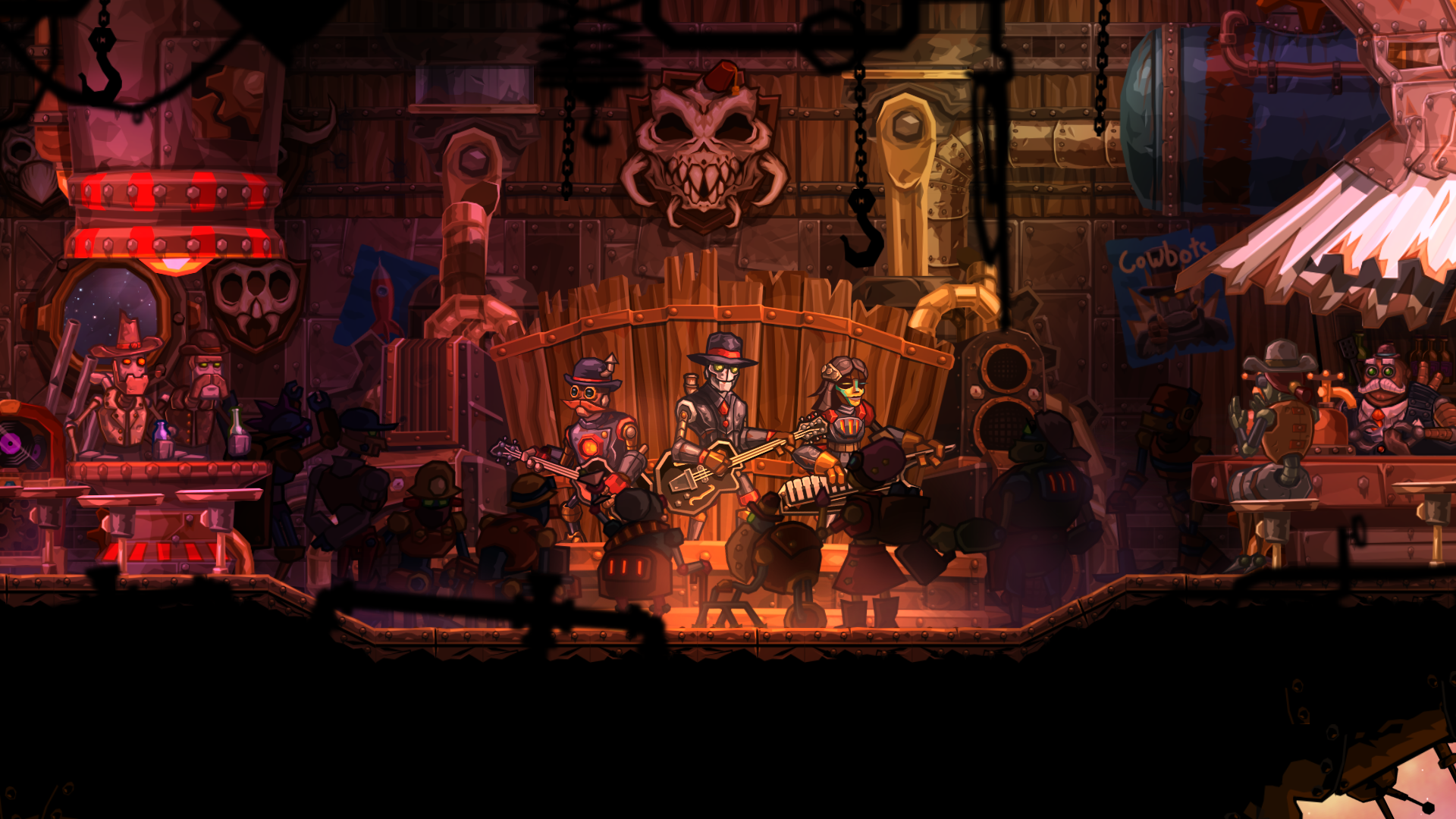 Above: Image & Form teamed up with Steam Powered Giraffe for SteamWorld Heist’s soundtrack.

When Image & Form first submitted SteamWorld Dig to Nintendo for publishing, the team didn’t dare dream that its little Wild West-meets-steampunk 3DS title would be a success. “We had a month where we had no clue: Is this game going to do all right, or is it just going to tank?” said Sigurgeirsson.

But, thanks largely to word-of-mouth, it went on to conquer the eShop charts in Europe and Australia, beating out big first-party titles like Animal Crossing: New Leaf.

“The shit hit the fan with SteamWorld Dig,” said Sigurgeirsson. “It was selling really well on the 3DS, and we realized that we can probably port it to more platforms.” So the team broke off development on two smaller titles — a SteamWorld Dig prequel and a mobile game — and refocused on bringing SteamWorld Dig to PC and other platforms.

That’s when the arguments started. “Some people were playing X-COM in the office and really liked it,” said Sigurgeirsson. “We were sitting and talking about what if we made a turn-based game in 2D.” But there were two disparate schools of thought over whether it could actually work.

The argument went back and forth until someone finally said, “Fuck you, I’m going to put together a game design document for this.”

Sigurgeirsson OK’d the plan on two conditions. Firstly, that it was set in the SteamWorld universe, and secondly, that it released before Christmas 2014 while SteamWorld Dig was still fresh.

That second proviso didn’t quite work out.

Sigurgeirsson now admits that SteamWorld Heist’s original deadline was unrealistic. “It was stupid,” he said. “But I really wanted it to happen.” Instead, he moved the deadline to early spring 2015, which has also now been and gone, before eventually settling for fall 2015, which is still doable … just.

“In Sweden, autumn is very long,” joked Sigurgeirsson, “so we’re still making it. It is coming out.”

Joking aside, Sigurgeirsson said that SteamWorld Heist is now very close to being finished, and he’s clearly thrilled with how it’s turning out. After my short hands-on session with the game, I have to agree that the Image & Form team have done a great job with their design brief, offering a quirky new take on the turn-based strategy genre.

A robot without a hat

My brief time with SteamWorld Heist showed a glimpse of the game’s characters, its X-COM-like turn-based movement scheme, and its shooting mechanic, which incorporates a degree of skill thanks to some gentle gun sway. Get your timing right, and you’ll pull off the head (or groin) shot that you’re going for. Time it wrong, and you’ll end up shooting a barrel or a wall.

One of my characters actually lost his hat during a mission, which Sigurgeirsson later told me is the worst thing that can happen to a robot. “A robot without a hat is like a dwarf without a beard,” he said. 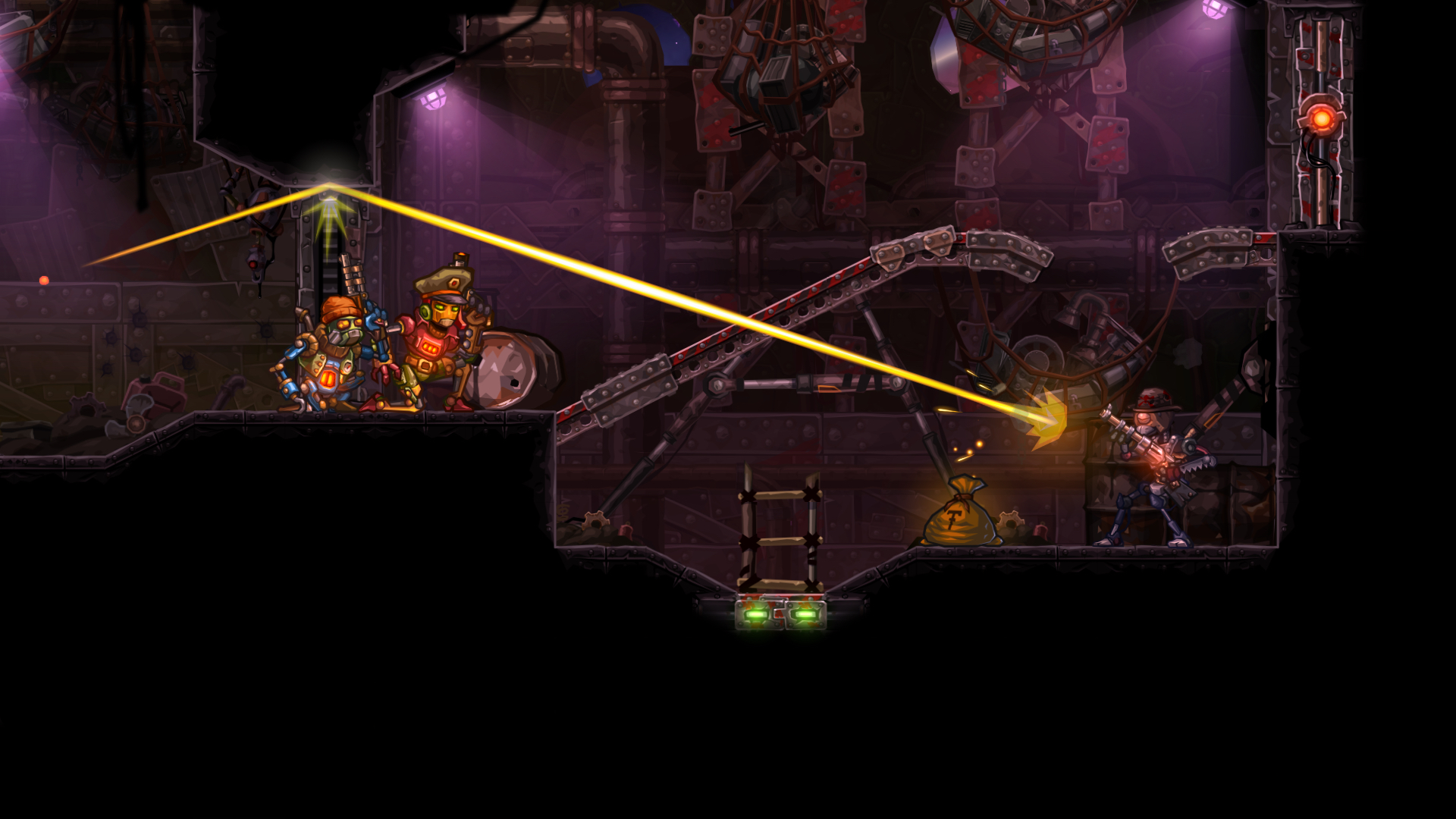 Above: Ricochets can be helpful.

The joyful charms of SteamWorld Dig remain in the characterful steam-powered robots that inhabit the world of Heist, each with their own upgradable abilities and personal quirks. And Sigurgeirsson says that we’ll encounter other types of characters during our journey across the stars as we find and loot randomly generated space ships. It’s a long way from the frontier life played out in Dig, but, many years into the future, water is still at a premium for the steam-hungry robots.

“It is the same world [as Dig],” said Sigurgeirsson. “These guys have been sort of forced to evolve.

“Of course, I don’t know how that works,” he joked. “but they had to, otherwise they wouldn’t be riding steam-driven spaceships. Although, you’re going to find other factions that aren’t necessarily stream-driven.”

Love for the 3DS

SteamWorld Heist is launching on 3DS first. It’s an interesting move, given how popular SteamWorld Dig proved across a wide range of platforms, including PlayStation 4 and Xbox One. But Sigurgeirsson’s team clearly have a lot of love for the 3DS community and a lot to be thankful for.

“We have a very good following in the Nintendo community,” said Sigurgeirsson. “It feels like the 3DS community made us; to bypass them with the very next game was just unthinkable.” 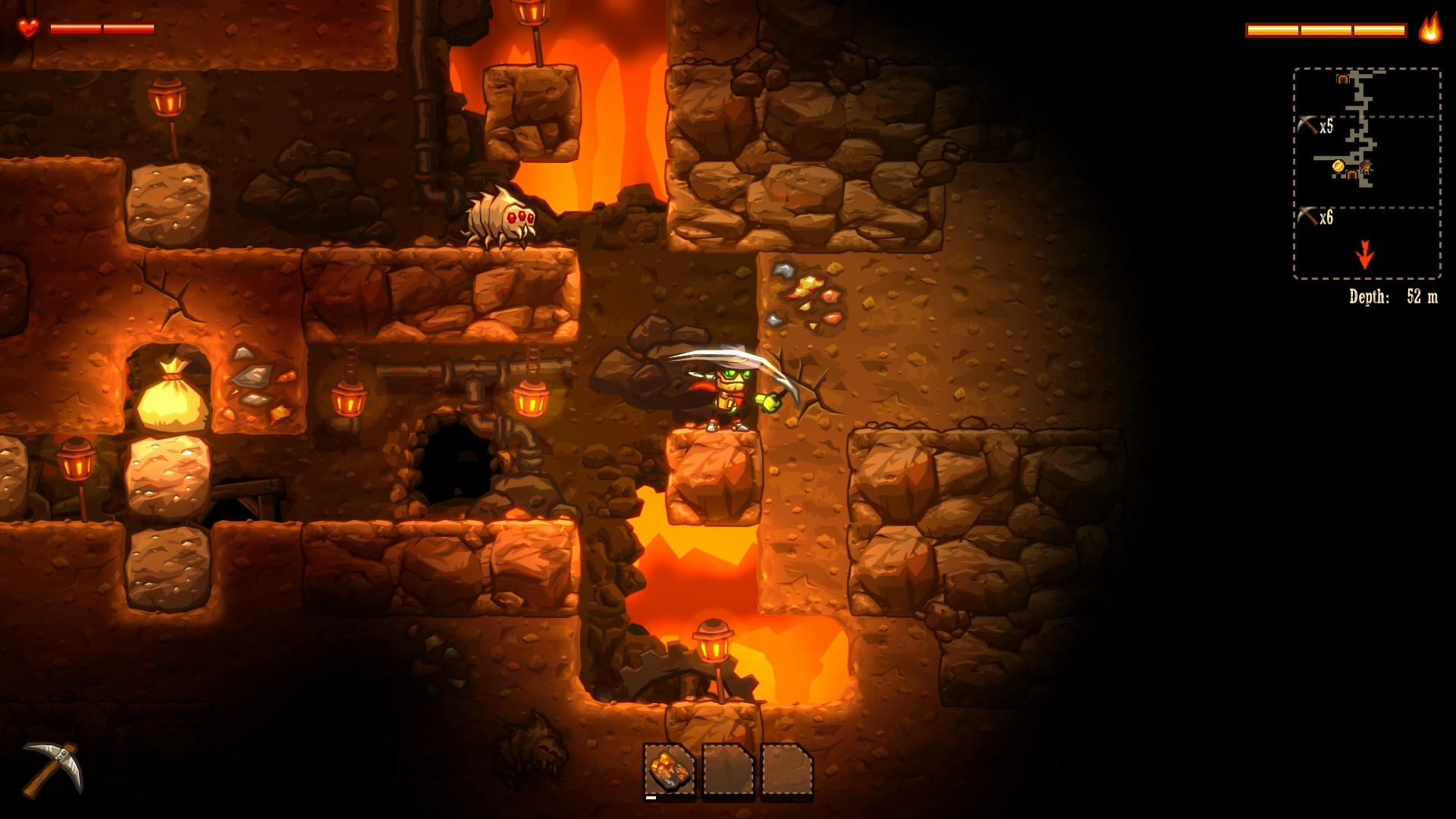 Above: SteamWorld Dig was an unexpected hit for Image & Form.

Sigurgeirsson explained how the 3DS is quite tough to develop for, given its relatively weak CPU and dual screens, but the chance of finding success is comparatively high. Nintendo has sold over 52 million 3DS units worldwide, and the loyal Nintendo community can help new games get a lot of attention.

Of course, having already found multiplatform success, Image & Form isn’t stopping with the 3DS, and SteamWorld Heist is eventually coming to “every platform known to man,” including mobile, says Sigurgeirsson.

I asked him how much gameplay we should expect from SteamWorld Heist when it does release, and he explained that it’s a very meaty title, bigger than SteamWorld Dig in every direction. “If you play it fast, you’re going to spend 12 hours,” he said. “I’m slow and stupid, so I’m going to spend about 16 hours.

“It’s a skill-based strategy game,” he added. “If your strategy is bad, you’re not going to succeed. It’s going to bite you on the ass.”