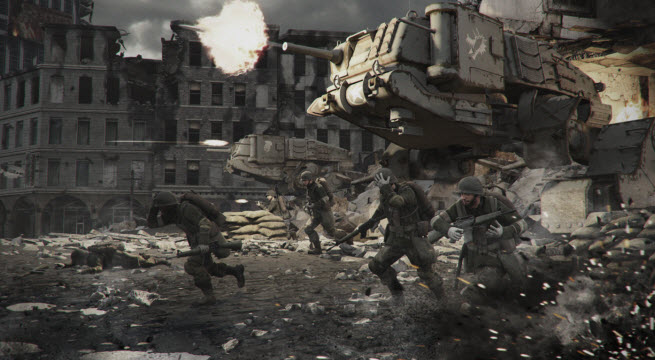 Steel Battalion Heavy Armor is one of the new hardcore games for the Xbox 360 which makes the daring design decision of using the Kinect motion-sensing gesture controls in addition to play with a traditional game controller. You use your arms to control the user interface inside your giant mech, known as a Vertical Tank, but you use the controller to fire your machine gun or cannon at enemies. 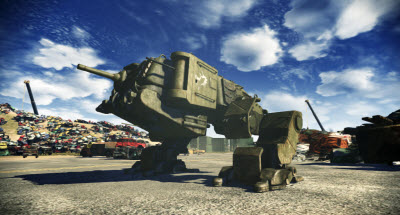 The game is a significant new title because it moves gameplay forward a notch even as gamers start to wonder whether or not they’ll be getting a next-generation console soon. It is games like this that push the envelope on innovation that will keep gamers happy while they wait for the new game machines.

I tried it out at Microsoft’s preview event last week and the game controls work reasonably well, even though the Kinect isn’t all that accurate at recognizing your gestures. The result should be a fun game when the title ships on the Xbox 360 on June 19 in the U.S. and June 22 in Europe. The game is being developed by From Software and will be published by Japan’s Capcom. 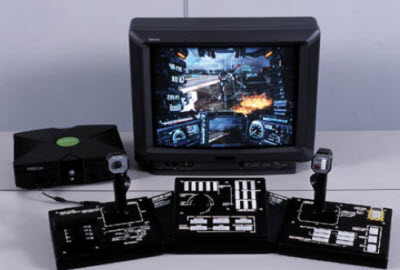 The whole point of adding the Kinect gestures is to immerse the player in feeling like they are truly controlling a big tank. In that sense, the game is like the original Steel Battalion, a mech game created for the original Xbox in 2002. Pictured left, the game had a giant controller that served as a command console for the mech.

The story for the new game is set in 2082 when semiconductor chips are no longer used. (Presumably they were the victims of electromagnetic pulse in a world war). So war is waged with rudimentary mechanical weapons as new superpowers fight for dominance. In the game, an Asian superpower has taken over U.S. territory and the U.S. Army has to land troops in a sea invasion of the island of Manhattan. You play Lt. Powers, piloting a Vertical Tank as he hits the beach with the rest of the invasion force. The game play and environment feel a lot like what World War II would have been like if you could fight your way through it in mechs. 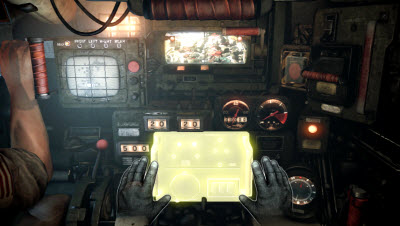 In the demo, I started out with a training mission. A soldier throws you an apple and you catch it with a Kinect gesture. You get into the mech and then learn the ropes.The commands are a mixture of Kinect gestures and button pushes on the game controller. You sit in a chair and calibrate the Kinect. You hold the controller in your lap and raise your arm to perform tasks inside your mech. You make a pulling gesture with your arm to pull a virtual engine starter. If you swipe sideways with your hand, you can talk to your crew mates in the mech such as the machine gun loader or the cannon loader.

Once I learned my way around the cockpit, I took control of the mech with a traditional controller, using the left stick to move forward and the right stick to change my facing. It was pretty easy to target distant targets and then pull the left trigger for the machine gun and right trigger for the cannon. 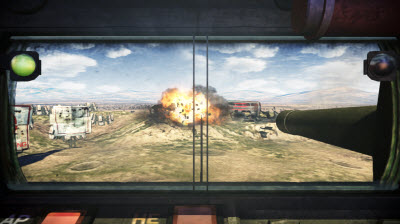 When I tried to learn the controls, I found them both confusing and fun. I had to perform many actions several times just to get them right. I suppose I could learn how to do the gestures right over time. But I’d probably get killed a lot before I mastered the Kinect commands. You push your hands forward and down if you want to get a view of the action outside of the tank. But you perform the same action to pull back and get a look at your virtual command console inside the tank. 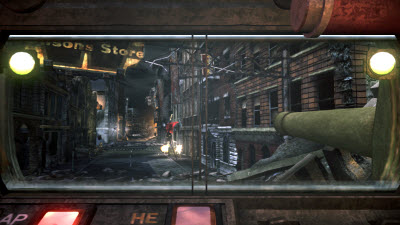 You look around at the actual crew mate characters inside the tank and realize that their behavior will tend toward efficiency or panic, based on how well you do in the game. If your VT is hit by a shell, you may turn to the right and find that your cannon loader is wounded and barely functioning. The bleeding soldier conveys a sense of the emotion of war and the lives that you hold in your hands. 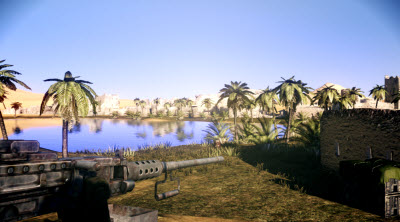 The controls can be overwhelming. You have to press a button on the console for either armor-piercing rounds to fight other VTs or high-explosive rounds to deal with the enemy’s infantry. If you spend too much time trying to punch the button, you may find that you’re being pummeled by cannon fire. For the most part, the animations inside the tank are pretty cool. 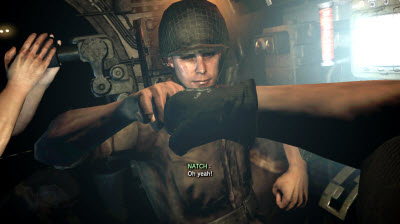 The fighting is gritty. You have to deal with an enemy soldier who opens your tanks hatch and drops in a grenade. You grab the grenade and drop it out a hatch at the bottom of the tank.

The environment is semi-destructible. So you can fire at walls and buildings that crumble. In the battles, you have to make decisions such as to move forward or delay your mission and help out a stranded tank crew. Those decisions have bearing on later encounters in the game.

During the combat scenes, the action is hairy. You fight in the streets of a city alongside infantry. With your VT, you can cause a huge amount of destruction, walking over enemy soldiers and crushing them underfoot.

In another level, the player had to march a VT through the Sahara desert and deal with the thirst of crew members. You had to move on until you found an oasis and then deal with an ambush by other mechs and conventional tanks. To target them properly, you can pull out your periscope, which gives you a zoomed-in view of the battle. Once you target your enemies, it becomes a lot easier to shoot targets.

The moment of truth came for me as I landed on the beaches of New York. I had to escort infantry in the face of enemy fire from machine guns, anti-tank guns, and fortified bunkers. At first, I walked right into a minefield and promptly died. The next time around, I maneuvered to the right along the beach until I found a path inland. I made a few mistakes with the interface but then brought down the periscope and started laying waste to the enemies. A power fantasy set in as I mowed down the defenders one by one. Vertical Tanks fired back at me but I took them out by targeting their legs.I got hit by a few shells and saw my gunner bleeding profusely. But we survived long enough to move on to the next mission.