Stellaris makes choosing characteristics for your new race a surprisingly fun process, and in the end, this feels a little like making a Sim: You have lots of buttons to push, the result is uniquely yours, and you’ll see it play out throughout the game. Skip the premade factions, and make your own. 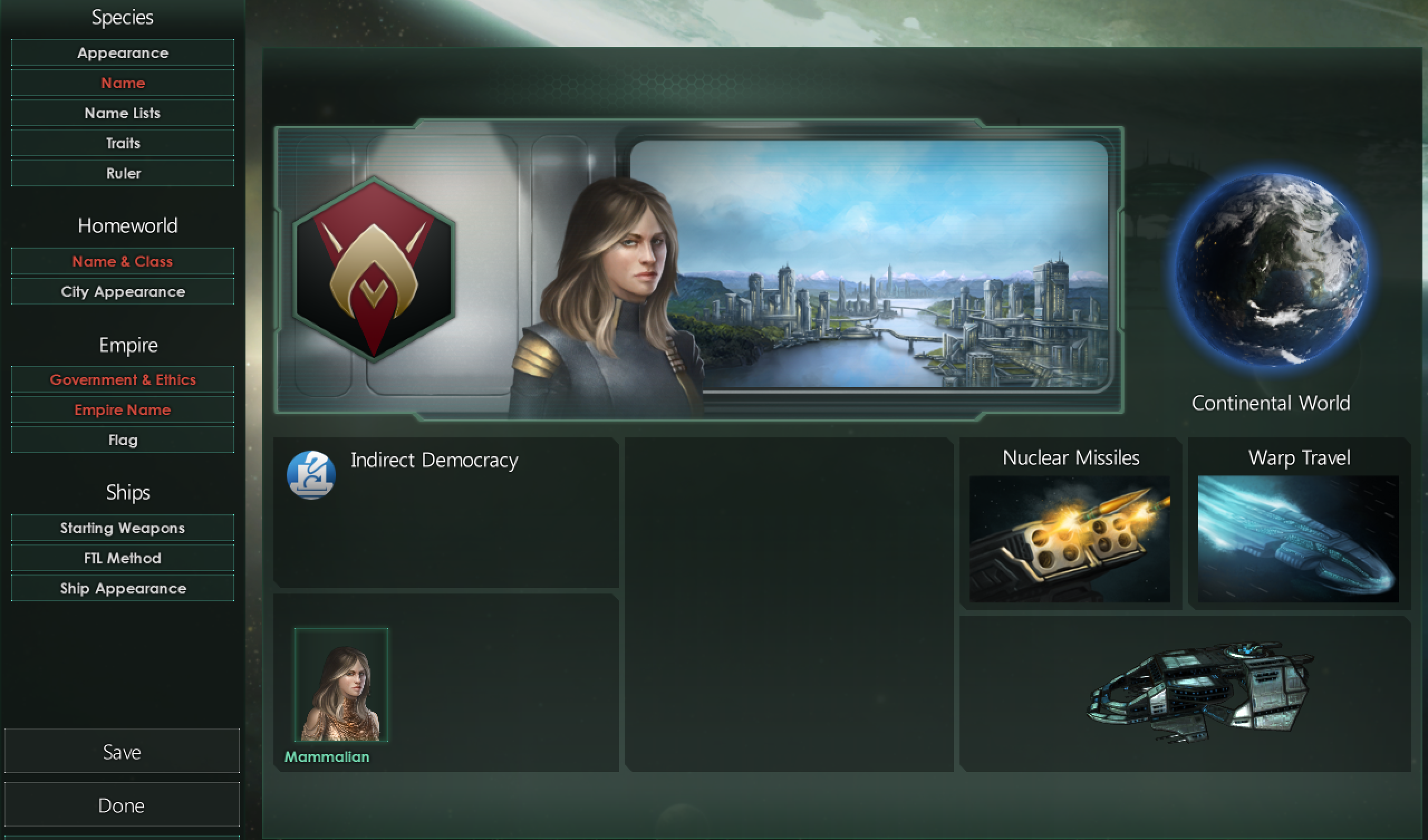 Above: This is absolutely where you should begin: Roll your own faction for far more fun.

Since when is exploration the fun part?

When you begin, you’ll explore your little solar system. You start with a couple of basic science and construction ships, and your job becomes finding the resources to make more, fast. A (honest to god) helpful tutorial guides you, but more than that, it offers little missions along the way that show you what to do but also give you additional decisions to make and things to consider.

As in Civilization V, these pop-up “quests” give you the chance to affect the overall trajectory of your gameplay — but they also provide fun diversions, giving you new and interesting things to do. And unlike Civ V, they usually mean you have to take some kind of action, not just click on menu choices.

I found the eXplore part of this 4X/grand strategy game the most consistently fun. New things to investigate, research, fight, or flee from popped up at a steady, truly pleasant rate, and while I always had plenty of things to do, I never felt overwhelmed. Each new planet my little science ships visited felt different than the one before, and the individual leaders I recruited (including named characters to direct some of those science ships) made a discernible difference to my gameplay.

The exploration piece of Stellaris made the steady, deliberate pace of resource acquisition bearable, and helped immensely with overcoming the “everybody’s building something, so now what?” stage of strategy games in general. I’m one of those folks who typically sets their scouts on auto-path and goes back to work on her cities. Not this time. My little science ships became my prized possessions, showing me the wonders of my tiny universe, and I loved them. 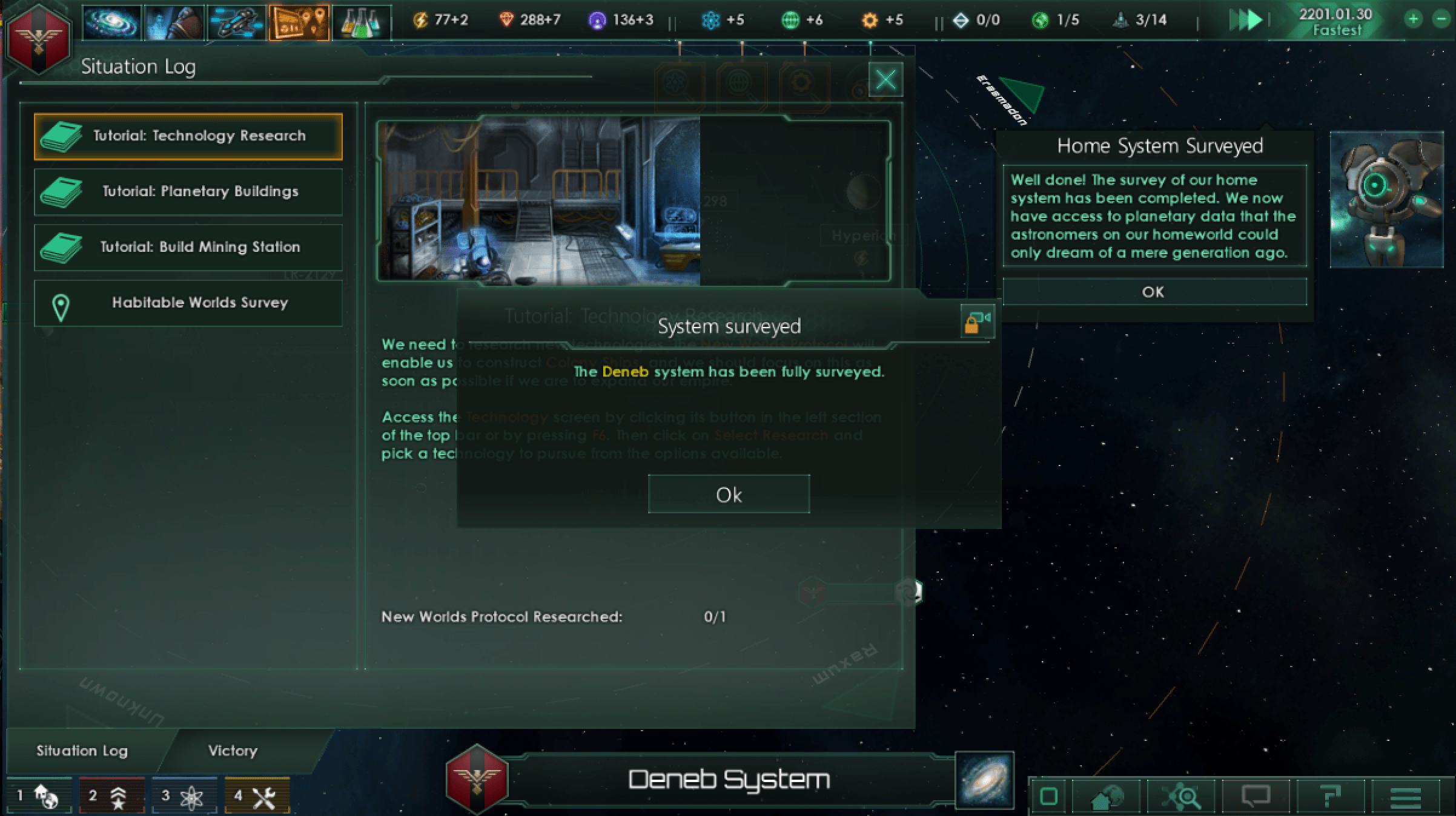 Above: Quests (at left) pop up throughout the game, not just during the tutorial. The pop-up “we’re done!” messages could use some work — some don’t offer enough information to tell you exactly what it was your little guys were doing.

As you settle in new parts of the galaxy, you have choices about what to do with the people you find there. Diplomacy isn’t necessarily Stellaris’s strong suit — as with combat, points decide everything, so you know exactly how many points of concessions you have to make to gain an advantage, in the same way you know how many types of attacks you need to win a battle. But some species aren’t that evolved, so you have the option to study them, or bring them into your empire and put them to work doing what they do best (hopefully, something your little “pops” don’t do well.)

Stellaris gives you hands-on control of just a limited number of settlements. After that, you’ll have to create sectors, putting your future in the hands of regional governors. I found the A.I. that ran these sectors to be uneven — they tend to turn out OK, but they’ll miss obvious opportunities.The system has some oddities as well, where you’ll have to build something on a planet, only to be told, “Thanks a million. We’ll take it from here,” as the sector wrests control away from you of what happens after that.

But the overall effect is to reduce the micromanagement to a manageable level, enabling you to focus on the more enjoyable exploration and new frontiers instead of remembering to upgrade that farm you built a dozen planets ago. People who get into grand strategy for that constant micropressure may not like the lack of autonomy, but I enjoyed the balance between tiny planetary actions and the ability to generally direct vast swaths of space with little effort. 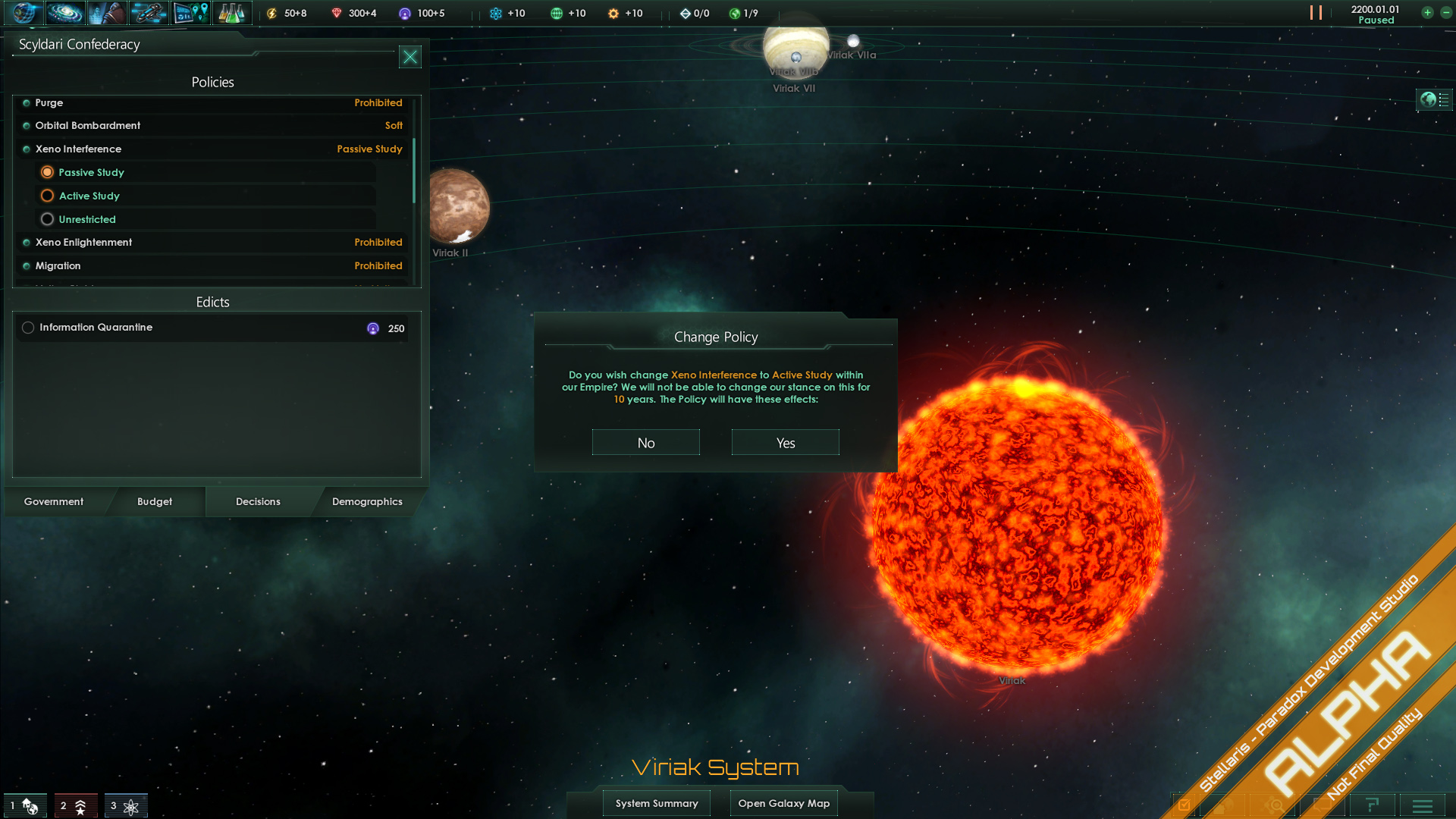 Above: Policies and edicts help keep your sectors in line, directing their overall production and research. (As shown in this screenshot from the Alpha.)

OK, I saw everything. Now what?

An odd ennui takes over once you’ve explored the entirety of your little universe. Granted, it takes quite some time to actually overrun it (you must control 40 percent to win), but that becomes part of the problem. The pace of exploitation is slow, the other races in the universe don’t often attack or interfere, at least on Normal mode, and while there seems to be plenty to do, it tilts toward ongoing micromanagement rather than reacting to a series of issues.

If this were a SimCity game, right about now is when the A.I. would send giant spiders or alien invaders or sharknadoes.

Given the pace of development, I’m grateful Paradox didn’t often choose to randomly destroy my little civilizations. Revolts by one sector or another sometimes fill that role, taking away chunks of your progress when they decide fending for themselves would be more fun than working for you.

Don’t get me wrong; Stellaris hardly falls apart here. It still provides engrossing play, and your little universe still has plenty going on. But the “eXploit” section of Stellaris feels much less engaging than the eXploring and eXpanding, and the contrast surprised me.

Paradox hinted that in the endgame stage, Stellaris would throw some surprises my way — robot revolutions, for example. But perhaps because my little faction didn’t choose in many cases to convert its people armies to robot masses, or perhaps because I didn’t play through to the final win or loss enough times, those experiences were disappointingly infrequent.