If you walk up and tell me that narrative is the most important part of Street Fighter, I won’t be able to control the violent spray of spittle flinging from my lips as I make the most condescending raspberry known to humankind. Yet Capcom painted itself into a corner when it showed footage of an involved 3D animated narrative mode for Street Fighter V, and wound up releasing, well … awkward illustration theater instead.

The story mode the publisher delivered, when placed under the most flattering of lights and viewed with the rosiest of glasses, looked rushed at best.

Capcom has been taking a lot of crap for that misstep, and the company’s finally working its way toward delivering what it promised: a fleshed-out story mode.

I had the opportunity to check out the first 45 minutes of this new story mode last week, which is due to come out in late June (along with DLC character Ibuki). Let me give you a quick run down on what’s going down in Street Fighter town. Above: We can’t solve all of the world’s problems with sparklers and punches

Our story opens with Charlie Nash waking up inside of some temple ruins, which is presumably where he had plummeted when he was gunned down by one of M.Bison’s Shadowloo attack choppers (see Street Fighter Alpha 1, 2, and/or 3).

Charlie has been pieced together by a mysterious organization. In exchange for Frankenstein’ing Charlie back to life, the organization wants him to run some errands for them.

This includes doing some fighting of people. Likely in a street-like environment. 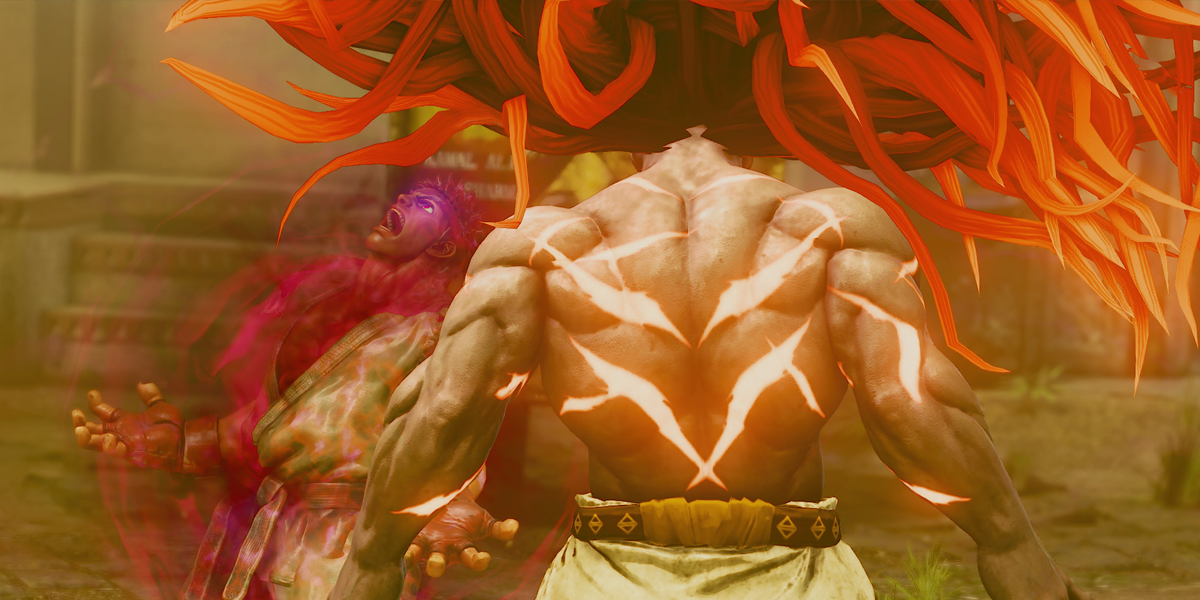 Above: What a time to have a charlie horse. Don’t eat me!

Meanwhile in India, Ryu broods over his Hado Karate powers, and Dhalsim tries to impart some mystic man-to-man brotherapy via violently punching and kicking each other. The session is interrupted when Necalli, the lord of overeating, teleports onto the scene and threatens to devours everyone in sight. 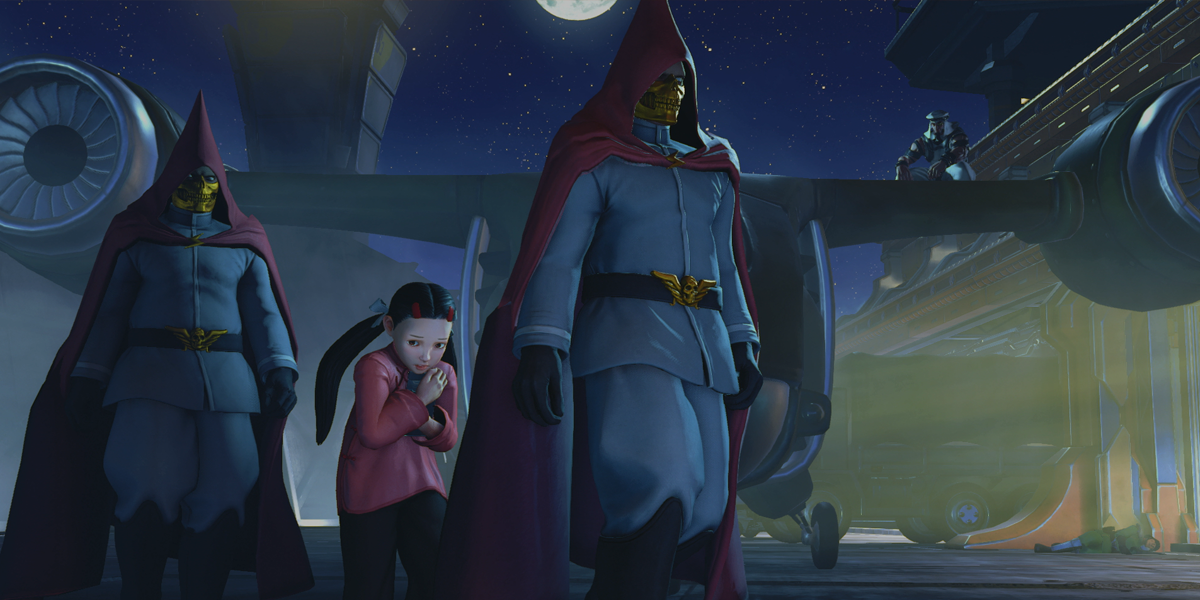 Above: We’d be better at guarding if we could wear something that didn’t block our peripheral vision.

In yet another part of the globe, Rashid (of the turbulent wind) is infiltrating a Shadowloo air strip looking for his mysterious “friend.”

Rashid spots a young girl surrounded by guards, escorting her to a helicopter. Our hero assumes that she is a hostage and dispatches the guards. Rashid, unfortunately, hasn’t learned that assumptions make an “ass” out of “u” and “me,” and discovers that the girl may not have been a captive after all.

Regardless, the girl points Rashid toward a warehouse, where he may be able to locate his “friend.” Instead, he runs into F.A.N.G, M.Bison’s right hand man, and a battle ensues. 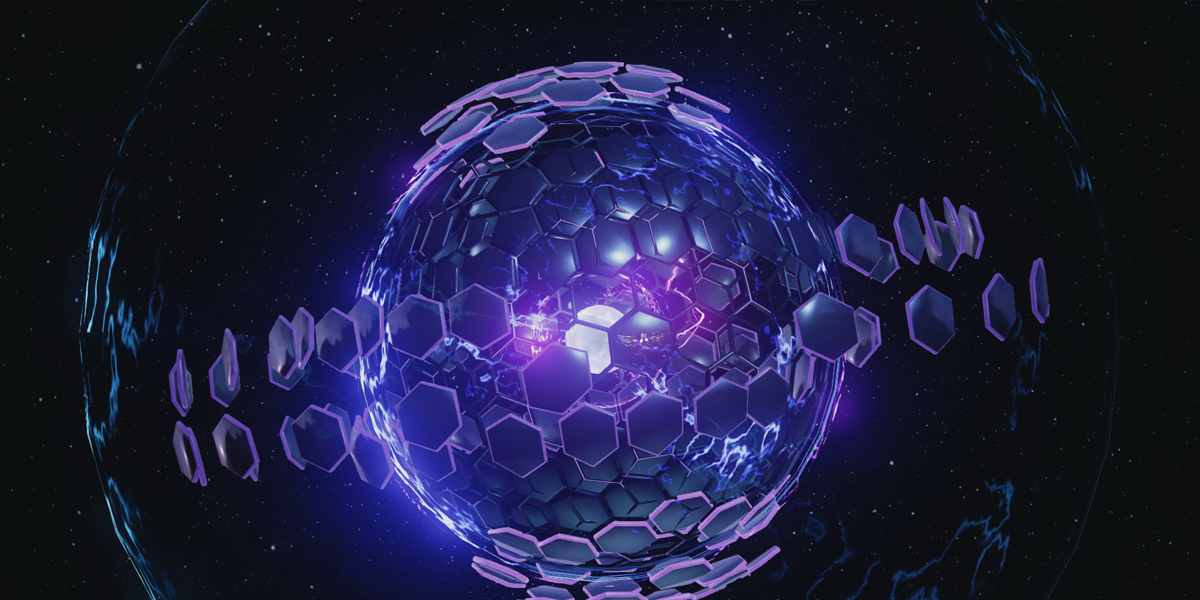 Above: Street fighting … in space

We then travel to outer space, where we see a huge menacing artificial moon move into position above New York City. The moon is actually an EMP weapon, which disrupts all electronics and satellite communications throughout the region. It’s not too far of a stretch to assume M.Bison dispatched this sphere. 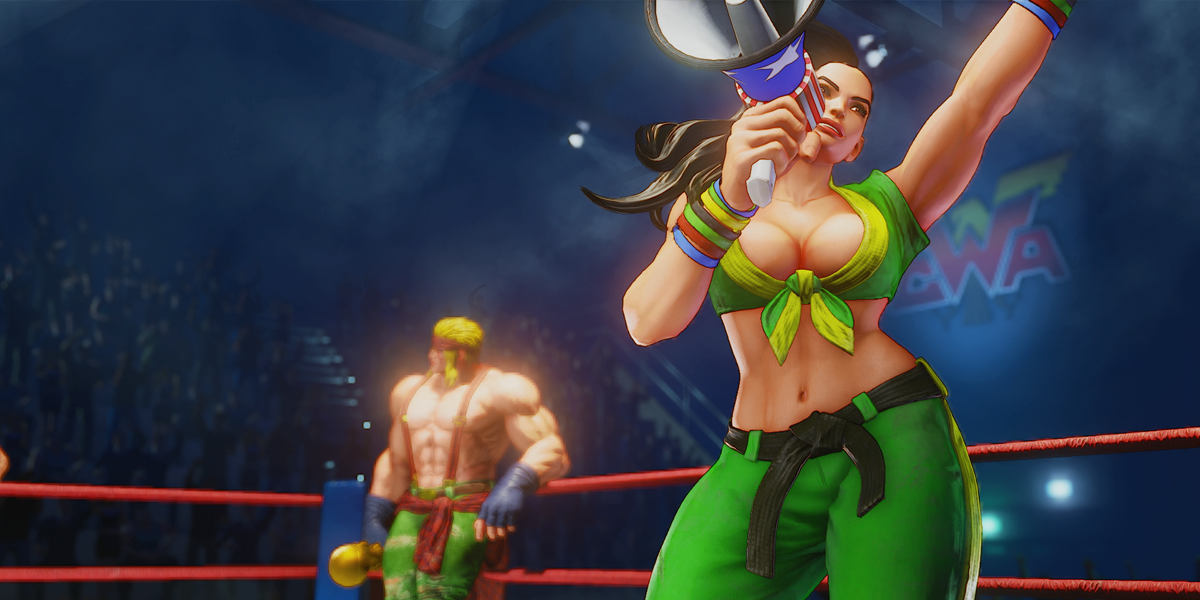 Above: A lot of vaping going down in this arena

In Tokyo, Karin, Birdie, and Ibuki are watching a live televised wrestling match between Zangief, Rainbow Mika, Laura, and Alex. The broadcasts suffers a disruption, and Karin’s butler concludes that some strange shit is about to go down. 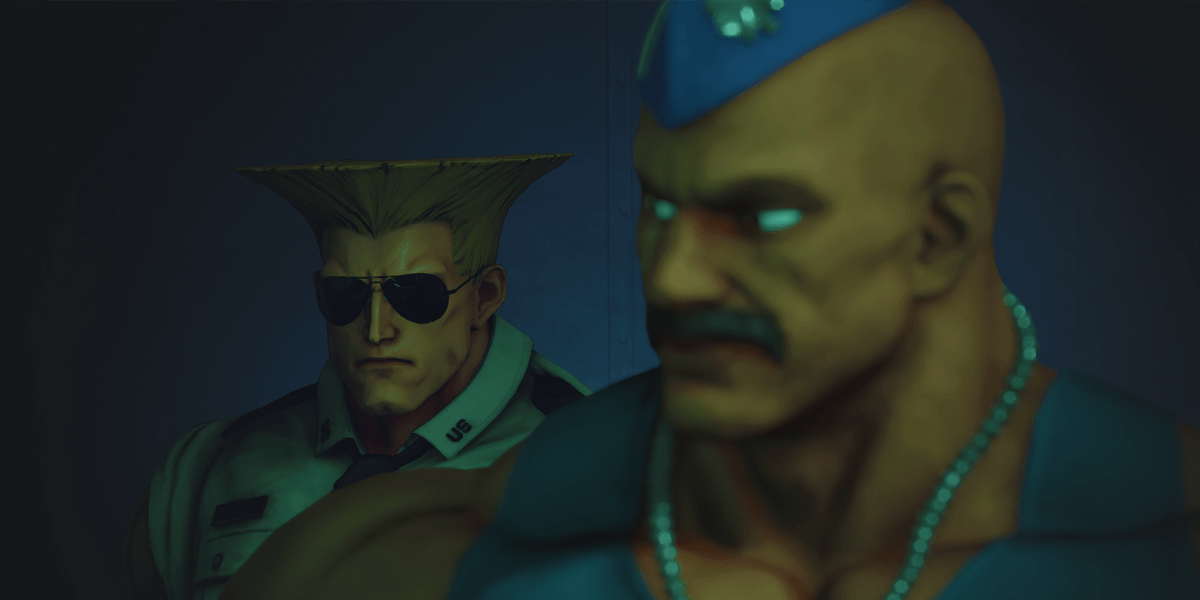 Above: Are you sure you’re in the right game? Who the hell are you?

Meanwhile, Guile, Chun-Li, and Cammy join forces to investigate what’s going on with the crazy sphere in New York City. We learn at some point that multiple spheres are in orbit, and they are heading for various regions of the planet. Fighting in the street is sure to help, I’m sure.

Back in New York, M.Bison’s henchmen — Vega (Claw), F.A.N.G, and Balrog (Boxer) — are squabbling over who is more powerful. F.A.N.G and Balrog decide the best way to settle this is to fight Shadowloo foot soldiers that had received injections of Psycho Power (the stuff that allows M.Bison to perform superhuman feats). Above: Whatever you do, don’t let him bite you.

We cut back to Guile and the gang investigating down town New York, when Zombie Charlie suddenly makes his appearance. Guile is shocked to see his buddy back from the dead. Is he a friend? Is he a foe? Guile figures the best course of action is to punch first and ask questions later. 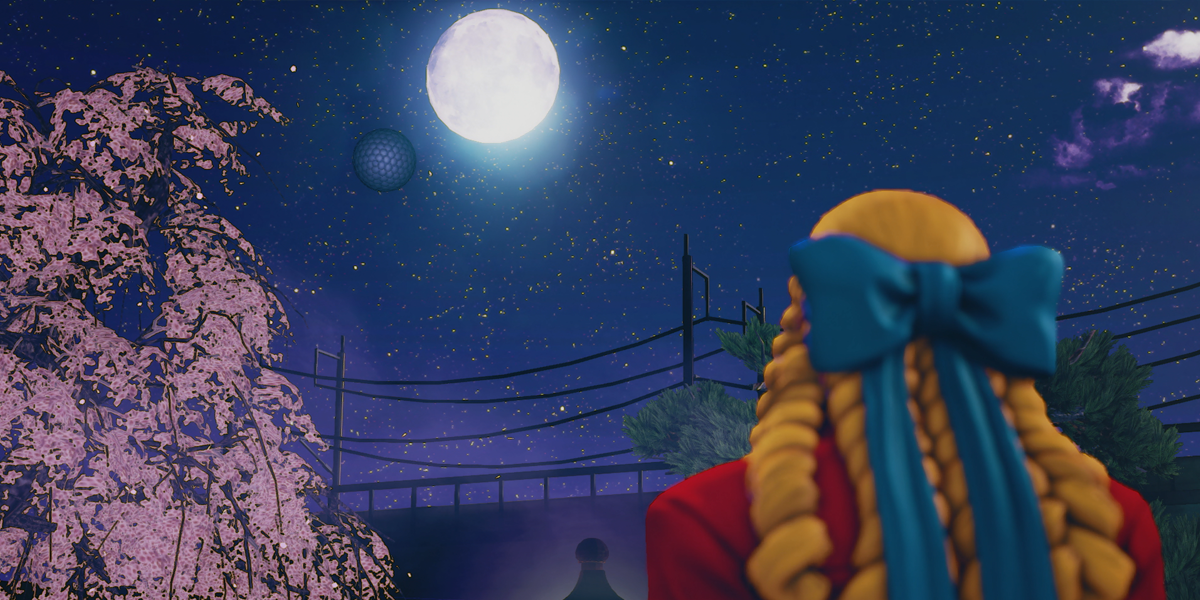 Above: Am I seeing things? Do you guys see this?

The story obviously does not end there. In fact, I wasn’t even close to halfway through after about 45 minutes. What I got to experience is just a small portion of what Capcom is dropping on us at the end of June.

It’s also not just one long cutscene. Players will receive cues to play through certain fights in the narrative, just like the story mode that Street Fighter V currently has.

This feature included playing as Balrog (Boxer) and a few other guest appearances from future DLC characters, which I am not allowed to name at this time. 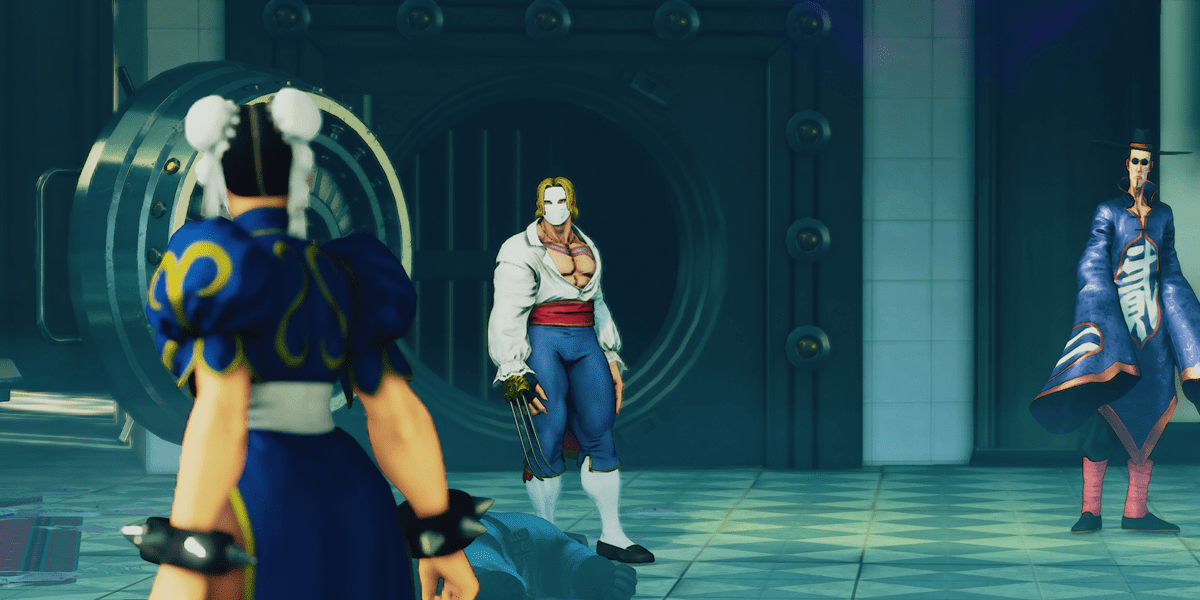 Above: They spoke in unison, “You two look ridiculous!” … followed by an uncomfortable silence.

The narrative mode also won’t replace the current story mode in the game. So when Ibuki hits the digital store, she will play a part in the more involved narrative mode I just described, and she’ll also have her own mini-story mode featuring the hand drawn artwork we are familiar with.

As for how much fight in-game money players can earn by plowing through this larger narrative mode, Capcom didn’t have an exact number. The publisher said it’s still working out the economics, but it was thinking of somewhere around the six-figure range. We’ll have to wait and see what they decide.

Is it worth the wait Above: No narrative mode in my Street Fighter?!? DO NOT RECOMMEND! NEVER BUYING FROM CAPCOM AGAIN!

If it wasn’t clear from the intro, I think narrative-heavy elements in a fighting game are, at best, a cool top layer to a meatier gameplay filling. Besides in-game narrative not being the important part of a Street Fighter experience, Street Fighter V’s launch story mode had about as much narrative content as Ultra Street Fighter IV’s.

But Capcom also promised this more involved narrative mode. I think it’s an attempt to compete with the incredible job NetherRealm Studios pulled off with the story mode of Mortal Kombat X.

The problem of making promises to a gaming audience, and not delivering as soon as possible, is that it’s like kicking a hornets’ nest. Everyone except the kicker is looking for any excuse to get pissed off. So Capcom needs to deliver.

From what I saw, it appears Capcom is trying to address the narrative complaint. Whether the entire narrative mode holds together, we’ll have to wait for the DLC to drop and see.