While trying to break from my obsession for video game completion, I kicked out Capcom and Double Helix from my support group. They are classic enablers. Turning Strider (releasing on Xbox One, PlayStation 4, Xbox 360, PlayStation 3, and PC) into a Metroid exploration game is a great idea for healthy people, but it’s going to be hell for my OCD.

Yet I accepted the PlayStation 4 disc anyways, so I have to accept responsibility for my problem. The accompanying paperwork confirmed that only 20 percent of the map would be playable for the press. Those words crunched slowly through the heavy gears of my brain for an eternal minute. Twenty percent of the map: I wonder if I can find every item and secret area there is to find in that small chunk? Can I find more items than the other writers? Could I do it quicker than them? Better? Oh, no — the obsession has started. 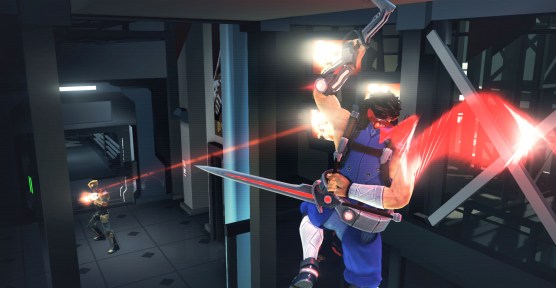 Above: Stop playing with the meeting room’s laser pointers, Steve.

The game starts with Strider Hiryu diving out of the clouds via his hawk-like wind glider and gracefully dodging enemy fire before landing onto the platform of a fictional dystopian fantasy land. If only my fall off the video game wagon was as graceful.

Button-checking shows that Strider starts off with several abilities missing, primarily Kunais (throwing knives) and Options (selectable special attacks all with different pros and cons), but what actions he does show up with are varied enough to provide for some adaptability in his first few offensive encounters. His classic quick-sword swinging attack is here (both mid and low), as is a ground slide and a hard attack that looks like his air launcher in the Marvel vs. Capcom fighting-game series.

The Charge meter fills as long as I’m inflicting hits on an enemy without taking damage myself. Taking a shot from an enemy bullet empties the meter. Filling it to maximum activates Charge mode, where Strider Hiryu’s attacks have twice the range and deal out twice the damage. I begin thinking about challenging myself to try to do the entire game without taking damage and maxing out the meter as much as possible.

On my initial run, I demolish a few groups of enemy soldiers but wind up eating a bullet. Damn it! I restart the game. I get a little bit further but wind up winged by a stray projectile. Damn it! Restart the game again. I get a little bit further and … damn it! By the eighth reset, I slap myself in the face for being stupid. This isn’t the old Strider formula where the primary goal is to memorize and dodge every bullet while perfectly assassinating platoons of robots for a big score. The key to this game is exploration. So I reset one last time and absorb my first of many hits. I sigh, shake it off, and remind myself that a perfect run is ludicrous.

So it’s time to explore. 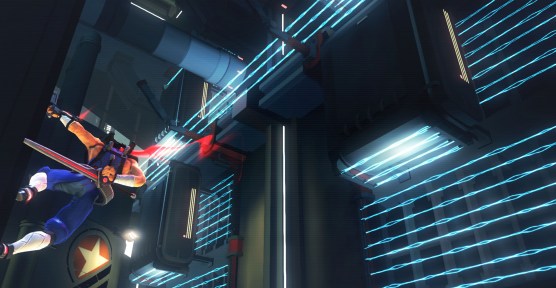 Above: The electric bill would be a lot cheaper if we invested in brick-based wall technology.

I reach the game’s first unattainable area, where a grate with red blinking lights and what looks like a breakable floor panel is hypnotically enticing me to investigate. I can keep moving in another direction, but I really want to see what’s behind these quite obvious secondary paths. I try every attack in my arsenal to break open the grate, but nothing cracks it. I check out the breakable floor platform, but again, nothing really works. I desperately want to see what’s beyond these barriers, but I am forced to move on.

I plow through a few more rooms and discover that I cannot advance any further unless I figure out how to crawl through a small opening on top of a wall. This is where I discover another of Strider Hiryu’s capabilities: He can climb up anything — the walls, the ceilings, the stuff attached to buildings, etc. This makes almost every nook and cranny of a level open to exploration. I climb through the small opening and obtain a slide attack power-up. A power up that happens to smash through grates.

I know exactly where I am going to try this thing out.

Getting that “tease” just right is huge for a Metroid-like exploration game, and in this preview build, Double Helix has nailed it. As I climb rooftops and slip through narrow passageways searching every corner along the way, I always find some area that’s just out of reach, mocking me. I can try to cheat my way to some area that’s unreachable, but if Strider Hiryu doesn’t have the correct abilities unlocked, that area will always remain just out of reach. Patience and perseverance through the portions of the game I can traverse eventually awards me with the power-up I need. During my excited run back toward the unreachable area I’ve been obsessing over, another closed area shows itself in just the right way at just the right time. It’s classic bait-and-switch that keeps me moving from one discovery to another — not to frustrate, but entice me to explore.