When you think critically about the classic ninja archetype, Strider Hiryu is probably one of the worst examples.

For a guy who’s been around since 1988, the superpowered assassin has never been too subtle, whether it’s taking the lead role in his own solo series or popping up in various cameo spots throughout the years. And yet, Strider is arguably one of the most recognizable ninjas in video games today, no thanks in small part to the frequent roster spot he’s held in every Marvel vs. Capcom fighting game since the series’ debut 15 years ago.

After sharing the spotlight for so long, it’s about time Strider got a game all to himself — and so far, this looks like a sleeper.

Strider’s still got the moves

Although the upcoming Strider reboot is a retelling of the original arcade game (which most people probably played on the Sega Genesis), the gameplay is actually more reminiscent of the Strider 2 arcade title that was ported to the PlayStation in 2000. Most levels are huge and full of vertical space, and the camera smartly pans out when needed to show off the action. 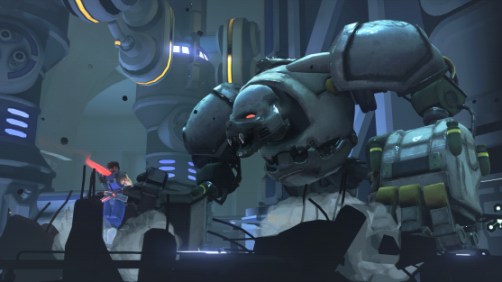 Above: Classic enemies like Mecha Pon aren’t pushovers like in past Striders. Expect long, hard fights from most bosses.

It’s really looking like the best approach, too, because Strider is a downright badass in motion. We played our demo with most of his talents unlocked, including all his Cypher weapon power-ups and robotic combat drones, which made the overall pace ridiculously frenetic.

By far, the best new tool in the arsenal is Strider’s catapult shot, which works as a boost dodge in most situations, propelling the ninja forward with a quick, plasma-charged bump. Combining all those talents really makes the platforming come together, and really good players should have no problem getting all over the map with well-timed jumps or wall climbs — or even by using frozen enemies as mid-air platforms.

Hence, skilled players should be able to blow through most section without much hassle, which hopefully makes the inevitable speedruns on YouTube and Twitch a real treat to watch next year.

All that movement would be wasted with bad level design, though, and Strider is thankfully cribbing notes from the right places.

Instead of the horribly tight angles of the original game—or Strider Returns—this reboot has wide, expansive levels lush with background details. In the factory level we played in our demo on the PlayStation 4, we could often spot things like faraway conveyor belts churning out enemies robots or the storming weather outside certain windows, and Capcom says they’ll most likely be hiding some Easter eggs in the background.

Most importantly, the large areas really push you to use all the abilities at your fingertips, most of which are especially critical in boss battles, platforming puzzles, or running through dozens of doomed enemy mooks. It’s only during puzzle-style platforming sessions that things slow down, so there seems to be a solid balance between the go-go-go segments and deathtrap obstacle courses.

And yes, at a glance, the level design has a clear influence from 2009 Xbox Live Arcade hit Shadow Complex, something that’s been brought up early and often by most keen-eyed fans.

That’s really not a knock against this new Strider, at least from what we’ve seen. In fact, the 2.5D design works really well from a visual standpoint. It’s easy for background scenery to distract you in certain spots, and you’ll have to pay attention to the map to make sure you’re not missing cleverly hidden routes. Like any decent Metroid-style platformer, the expanded territory also hides plenty of goodies and power-ups along the way. 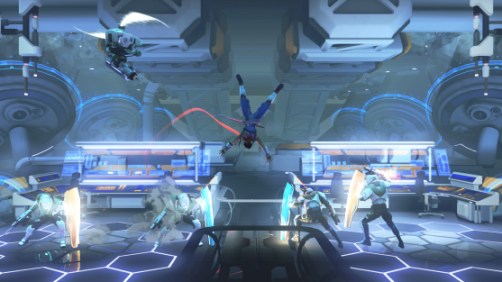 Above: Strider doesn’t really slow down when taking damage, so it’s easy to soak up tons of punishment in a rush.

When everything just ‘clicks’

All good impressions aside, boss battles definitely seem like they’ll be the best part of Strider, with even the early ones pose a significant challenge. At the end of our demo, we battled the redesigned Mecha Pon, a giant robotic gorilla that you can destroy in the original Strider in about 10 seconds.

While Strider’s rapid-fire plasma cuts were good at taking out chunks of Mecha Pon’s life bar, the room in which the battle took place prevented a lot of vertical movement, forcing me to rely on ground-based dodging and a lot of button mashing. As usual, there’s an attack pattern to keep in mind, but your timing has to be on-point.

In hindsight, it took me a while to scrap the killer ape because I wasn’t using all my tools, and I only won when I remembered to use Strider’s robot drones in conjunction with my main attacks. Now that the combat’s “clicked” for me, I feel like I could beat Mecha Pon with relative ease.

At the end of the day, that kind of learning curve is what’ll likely give Strider some real flair outside of the familiar Shadow Complex/Metroid-style design. As long as there’s a lot more depth and replay value than the criminally short Strider 2, this ninja platformer should more than live up to its pedigree.