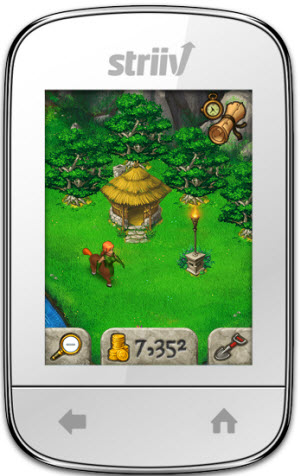 Games like Wii Fit have made it more fun to stay fit in your living room. But Silicon Valley start-up Striiv wants to motivate you to stay fit outside the living room, when you’re walking around at work or running errands. It will do so with a $99 portable device that measures your movements and gives you rewards based on your activity level.

David Wang, chief executive of Redwood City, Calif.-based Striiv, said in an interview that the Striiv portable fitness device lets you turn everyday activities into fitness opportunities. The gadget measures your every step, even when you’re walking up stairs, and gives you chances to hit personal goals, play games with friends, and make donations via walkathons.

“We want to build a movement around movement,” Wang said. “We see it as the intersection of social gaming, digital health and next generation of philanthropy.”

The device is part of a larger movement to “gamify” health and fitness, or making non-game activities more game-like through rewards and game design. Lexi Franklin, head of strategy and design, believes that this is way to reach the larger mass market of people who don’t exercise as regularly as they should. These people know that they should exercise more but can’t bring themselves to do it.

“There’s a gap between knowing and doing that we can address,” Franklin said. “Instead of negative reinforcement that makes you feel bad about what you haven’t done. We give you positive reinforcement for all of the small things you do to improve your fitness, like walking to lunch or taking the stairs. You get rewarded for every activity you do in a day.” 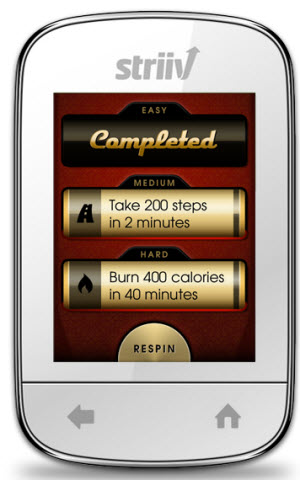 Added Wang, “There are the Type A people who are self-motivated. We wanted to do something for the people who aren’t like that. We believe the current definition of fitness is leaving out so many people. This has the potential to transform your identity, or how you feel about yourself.”

In the first game, MyLand (pictured in the top image), your enchanted island fills with more exotic wildlife and plants the more you move. It’s kind of like a fantasy version of FarmVille, with centaurs and crops. You can grow things by using energy, and you can get more energy by moving around. No setup is required and the device has its own tutorial.

You can also undertake daily challenges, such as bonuses for taking a lot of steps in a short time, like taking 2,315 steps in ten minutes. The device prompts you to walk as many stairs as are in the Eiffel Tower, or you can walk a distance equal to the length of the Golden Gate Bridge.

The features include the ability to have a “walkathon in your pocket,” where you can raise money toward charities by walking. Striiv has partnered with Global Giving to make donations toward charities. The whole system has been designed with game mechanics in mind.

Formed in 2010, Striiv’s team includes social game and tech industry veterans. Wang’s background is in location-based technology.Both Wang and Franklin were members of Booyah’s team that made the location-based game MyTown, which is like Monopoly in the real world. Booyah’s original app gave people rewards for all sorts of achievements, but Wang said Striiv wanted to be laser-focused on just one goal: better fitness.

Rival technologies include Basis, which makes a wrist band that you wear so that it can measure both your movement, heart rate, and perspiration. 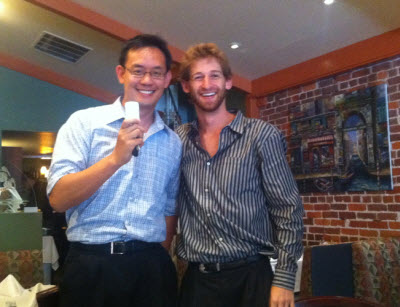 Wang said his designers considered that but figured it wasn’t quite as convenient as carrying something on your key chain. He acknowledges that Striiv loses “some signals” like heart rate metrics and other physical data.

But it’s quite portable. If you want to detach it from the key chain, you can do so easily. It’s a “frictionless” device, or one that doesn’t put many barriers in the user’s way.

The Striiv device has sensors that measure when you are walking up stairs, so that it can capture data that other devices don’t.The company calls the proprietary sensors its TruMotion technology.

Wang said the team considering using a smartphone, but it is missing accurate sensors and it isn’t a perfect fit yet. At some point in the future, though, Wang might consider it. 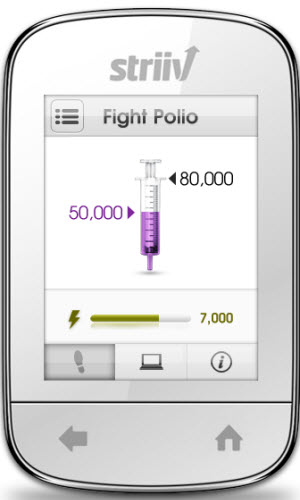 The Striiv device has enough battery life to last for four or five days of use. And it has a high-resolution screen powered by a dual-core ARM-based processor, which was designed by experts (Mark Ross, vice president of engineering) in operating devices on a small amount of battery power.

You can upload new games into the device via a universal serial bus port, which can be connected to a computer to upgrade the apps, charities, games and for making updates to Facebook. More games and apps will be revealed later.

Overall, Wang said he believes the trade-offs in features and cost are worth it. In testing so far, Wang said the engagement is very high among the 300 users testing it. The engagement level reminds Wang of social games on Facebook. Those games have opened the gaming market to a much wider range of people than just those who would pick up a game controller. Wang believes Striiv can open up the world of exercise to more people.

Striiv is charging $99 for its device, which will be sold via the company’s web site and retailers who will be announced later. You can pre-order it now and the device will be available in mid-October. The company has 22 employees and it has raised $1.5 million already and is closing another round shortly. Investors include Dado Banatao, Ronald Chwang and Colin Angle.

“Instead of emphasizing our flaws, we turn it into positive conversations of looking at all of the good things you did during the day,” said Franklin.

Here’s a video of Striiv’s vision.