SAN FRANCISCO — If there is one aspect of covering the Game Developers Conference that I enjoy, it’s bumping into an indie project that I wasn’t planning on seeing that oozes potential. Unlike last year, I didn’t have to get pitched out of the blue to find something cool. This one was hiding in plain sight inside the excellent Indie MegaBooth.

It’s called The Flock (coming to Steam for PC this summer), a horror-themed asymmetrical multiplayer game — think Left 4 Dead or Evolve — created by students of the HKU University of the Arts. For a student project, it shows a high level of technical, design, and visual maturity.

It’s also the one game in the Indie MegaBooth that turned me into a controller hog.

Run toward the light 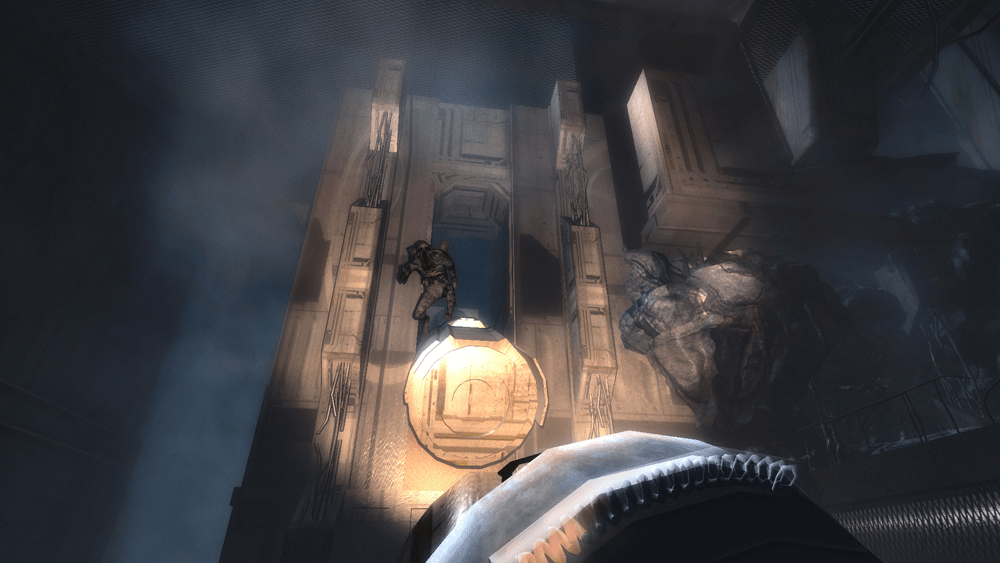 Above: Is it just me, or did that statue move?

The Flock takes place in a desolate fantasy-meets-high-tech land of horror. All players in a match spawn in as a member of the Flock, a race of vicious HR Giger-esque monsters that are extremely sensitive to illumination, yet are desperate to gain possession of a sacred flashlight-like artifact. The first few moments of a game of The Flock sees everyone sprinting toward the light-emitting item. The first one to snatch it transforms into what is known as a Carrier. Everyone else in the immediate area gets blasted by a huge concentration of light and respawns to the outskirts of the environment.

Being the Carrier is crucial, as winning requires holding on to this incredibly valuable flashlight longer than everyone else. The beam of light that emits from this object can also kill an aggressive Flock. In exchange for this awesome power, the Carrier’s movement is slower than the opposing creatures’ — and the flashlight demands constant movement. Hiding in an obscure corner somewhere on the outskirts of the map will get the Carrier player no where.

The Flock creatures want to kill the Carrier as soon as possible, thus gaining the role as the game’s new Carrier. Flock have several physical advantages that make this possible, such as a quicker run speed, a higher jump, and the ability to make statue copies of itself to act as decoys. A Flock creature standing still for a certain amount of time will also be able to “statue up” their body, gaining both the appearance of a decoy and gaining invincibility from the light’s harmful rays.

Adding an even more devious option to the decoy idea, Flock’s can also use a statue copy of itself as a teleportation point. This allows a Flock player to set up some frightening traps where the Carrier can’t tell which statue is real and which is fake. And even if the Carrier player does know, that doesn’t mean it’s safe to turn their back on the decoy. Above: I’m sure there are no monsters in here…maybe…

The team showed off three environments, all containing some great gameplay. The Slums, for example, is a vertical-intensive area with a lot of roof tops and towering blocks of concrete. One of the rules of twitch first-person shooters is that the person with the high ground has the advantage, and this is even more true when it comes to stalking someone that has to keep their eyes open for attack from the front, back, and sides.

Another example is The Temple, which is a decoy player’s dream environment. The map contains tight corridors covered with fake Flock statues that are in total disarray. The Carrier can try to memorize the layout of the statues, so the next time they run through they can notice if something is amiss. But try doing that mental exercise while stressing out over monsters pouncing on top of you.

Each level also contains a piece of bait to entice the Carrier, in the form of a giant blue spherical light. Pointing the illumination artifact’s light beam at this big ball will increase the Carrier’s earned time, allowing for a potentially quicker win. This also makes these areas prime spots for a Flock trap.

The Flock has a ton of potential, student work or not. The foundation of the design doesn’t stray too far from the “easy to learn, hard to master” while making sure to introduce complexity somewhere else. In this case, the level design.

If the team keeps it simple and stays true to what I saw at the booth, I think they will wind up providing a great, small, hunt-or-be-hunted title for the summer.