Cuphead was a hell of a hard game. I know that.

But Cuphead earned three major awards on Thursday night at the DICE Awards, the peer-voted awards staged by the Academy of Interactive Arts & Sciences. The debut title from Studio MDHR was nominated in five categories.

It was a tough game, with a focus on controlling analog sticks precisely at every moment of difficult boss fights.

The game was lovingly illustrated with hand-drawn art that was reminiscent of 1930s cartoons. So it was no surprise the game won for best achievement in animation. It also won for best original music and best art direction. 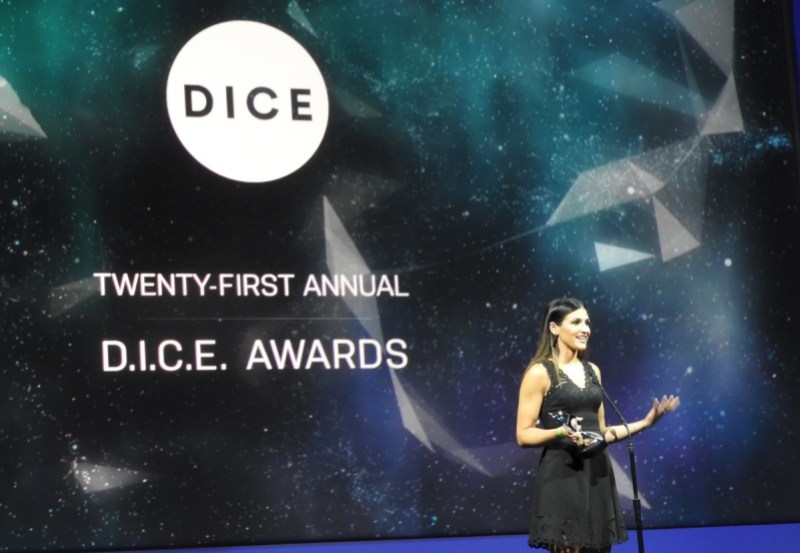 Maja Moldenhauer, executive producer and artist on Cuphead, gave a talk at the DICE Summit, the elite gaming event co-located with the DICE Awards, about how tough it was to pull together a game studio and build the game that two brothers, Chad and Jared Moldenhauer, dreamed about building for a long time. They mortgaged their homes, quit their jobs, and signed up Microsoft’s ID@Xbox as a publisher.

“I got the call to talk here, and I thought, ‘I was a little bit confused. What am I going to teach these people? I’m a student here,” said Maja Moldenhauer, in an interview with GamesBeat. “It was from a fresh lens, fresh perspective. Not having made 20 years before, how did we pull it off? We had a view from the trenches.”

She said she didn’t want to romanticize the fairy tale of making the game, because it was so hard to do. She noted that the brothers wanted the game to be as hard as the games they grew up playing on their old Sega machines. Maja Moldenhauer’s role evolved as she, a financial analyst, realized that she could do a better job keeping them all on schedule.

“They weren’t going to compromise on that,” she said. “I tried to keep them on schedule. It was a good balance.”