Sybo‘s Subway Surfers endless runner mobile game has more than 700 million times. Now the company is hoping for the same magic with its next endless runner, Blades of Brim, which launches today exclusively on iOS.

Blades of Brim is another entry that brings fast-paced combat and a new crew of runners and fantasy universe to the genre. It’s a crowded market, one that Temple Run kick-started in 2011. It now has tons of competitors. It’s so fierce that not even Zynga could crack into the market with its Warner Bros.-licensed Looney Tunes Dash. But Sybo has been one of the winners, as Subway Surfers has had 62 billion play sessions with 75 billion miles run. It was the second most downloaded game in 2014.

Copenhagen-based Sybo has created new characters aimed at grabbing your attention: Zuma the Savage Beastman, Lilith the Trickster Demoness, and others. You embark on heroic quests and battle enemies — while running. You have access to “wicked weapons, potent power-ups, and magical mounts.” Characters can collect things and upgrade their capabilities as they go. It is playable both offline and online for single player. It has cool 3D graphics thanks in part to Apple’s Metal graphics technology.

Sylvester Rishøj Jensen, the creative director and cofounder of Sybo, said in a statement that the game combines the endless runner and role-playing game genres. It will have new and experiences — and it’s fun, said Bodie Jahn-Mulliner, the chief executive of Sybo, in a statement.

Trained as animators, Jensen and Jahn-Mulliner founded the company in 2010. The team is now 40 people. Sybo received seed capital from CAPNova, which is a Danish incubator initiative. Sybo is working with Spellgun/Talkweb on Blades of Brim for China. Sybo worked with iDreamsky to release Subway Surfers in China.

Subway Surfers has 13 million fans on social media. You can bet they’re going to be hearing about Blades of Brim soon. The new game is launching simultaneously in 17 countries, including China. 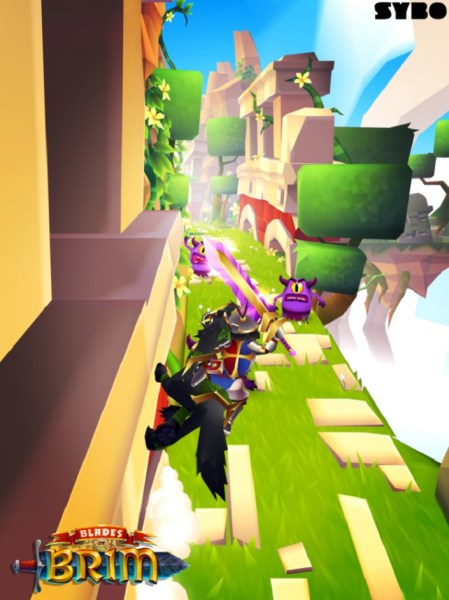 Above: Blades of Brim endless runner on iOS.