Sulon Technologies is unveiling a new kind virtual reality platform that will turn any room into a fanciful virtual space.

Sulon is showing off its demo of The Cortex virtual reality “spatial gaming” platform at the Game Developers Conference in San Francisco. In doing so, the company is trying to win over the hearts of game developers in what is becoming a fierce competitive battle to define the next generation of gaming. Competitors include Oculus VR and new entrant Sony, which announced its Project Morpheus at the GDC on Tuesday evening.

The Toronto company has taken a different approach from other kinds of virtual reality, said Dhanushan (Dhan) Balachandreswaran, chief executive of the firm. You wear a headset with goggles that cover your eyes. It then uses magnetic technology to detect the borders of the room. It can then take game imagery and virtually paint those images onto the walls of the real room. So it’s like layering a fantasy world on top of the real world.

You can view this fantasy world as either fully immersive virtual reality, or as augmented reality, a mix of the real and unreal where you can see virtual images layered on top of real world images. After you put on the goggles, you can walk around the room and it will seem like you’re moving around in the virtual environment. The room can be as big as you want it to be, as Sulon transforms the room by mapping a fantasy world on top of the real room. It works both indoors and outdoors.

“You could walk around in circles, but visually it may feel like you’re walking for miles,” Balachandreswaran said.

The company’s vision is to create something like a Holodeck, a simulated reality facility from the Star Trek films and TV shows. For now, the Cortex is pretty bulky. But production versions will be smaller and akin to other virtual reality headsets. It is a wireless “wear and play” device that transports you into a virtual existence with minimal setup. It uses a proprietary spatial scanner to create its experiences, which are contextually aware. 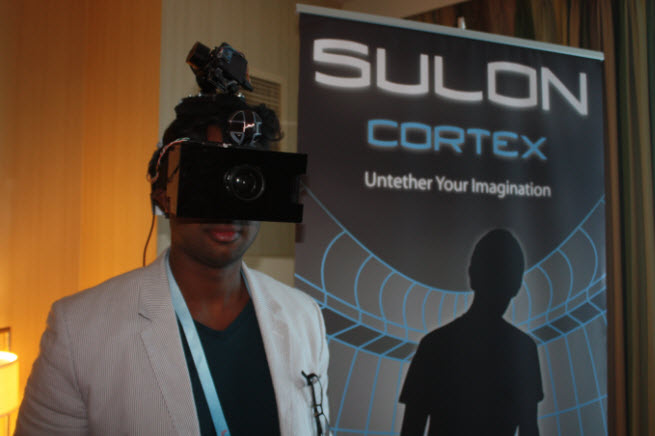 Your physical environment becomes an immersive virtual world. I tried it on and it worked. Visually, the demo was grainy, like you were looking through a screen door. But it had high-definition features and it precisely mapped the walls of the room. It is so immersive that Sulon has built in a little beep that sounds off if you move too near a physical wall while you have the goggles on.

The platform has a Cortex Spatial Scanner that maps the physical environment, using laser and ultrasonic technologies. It has positional awareness of your whole body.

Then a Cortex Spatial Processing Unit (SPU) kicks in, running on a Linux-based operating system on a computer. It transmits and processes the data. The SPU connects to a mobile smartphone or tablet device via Bluetooth. The display of the mobile devices can be slipped into the goggles and the mobile device’s screen becomes the screen that you look at. The Cortex Visor that covers the mobile devices then converts its into a stereoscopic display.

The screen resolution will be 1080p or higher. The system uses a Qualcomm SnapDragon 800 or equivalent processors.

“From a tech view, we look at what is reliable and plentiful and re-apply it to our application,” Balachandreswaran said.

Albert Lai, chief executive of Big Viking Games and co-founder of Kontagent, invested in the company and is on its board of directors. He believes it will fully democratize immersive holodeck experiences for the price of not much more than a smartphone. Lai had set aside his investing habit to focus on building his companies, but he said, “I decided to come out of hiding to invest in something important and exciting.”

Recommended screen sizes are 5.5 inches to 7 inches. You wear the headset with a rechargeable battery pack that you wear in a backpack. The software development kit includes a plug-in for the popular Unity 3D game engine.

“If you want photorealistic graphics, like an architectural walkthrough, you can have the processing happen off the device and then stream the content to the user’s screen,” Lai said.

The company is taking preorders today for The Cortex, and it expects to ship the first kits in the fourth quarter of 2014. The $499 dev kit will include the Cortex head-mounted visor, the Cortex Spatial Scanner, the Cortex SPU, and a software development kit. It will support both Android and iOS devices, but the dev kit does not include those devices. A consumer version is expected to launch in 2015.

“For $499, you can take your mobile device and engage in a holodeck experience,” Balachandreswaran said.