This year’s batch of summer blockbusters took us on quite a trip. We drove through the blood-soaked Fury Road, attended a theme park filled with hungry prehistoric creatures, and traveled with former arcade champions as they defended the world from Pac-Man and Donkey Kong.

Now that the summer movie season is over, it’s time to take a look at how well developers captured the stories and action scenes from the big screen. Over the past few months, I watched all the big films (stuffing my face with way too much popcorn) and played the games based on them. Since I’m not sticking to GamesBeat’s usual review guidelines, these are just brief impressions of what each licensed game is like, followed by a simple report card-style scoring system.

Like last year, free-to-play mobile games dominate the list — more than likely because they’re cheaper and faster to make than a console or PC game. But that doesn’t mean every film had a standalone game that released alongside it. That’s why Avengers: Age of Ultron and Ant-Man, two of the biggest superhero flicks of the year, aren’t on the list (they only had minor tie-ins to existing Marvel games). 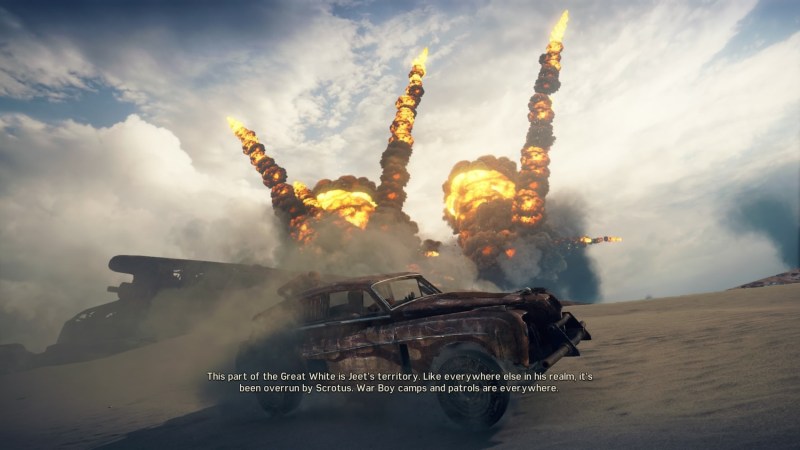 Above: What a day. What a lovely day!

How does it tie into Mad Max: Fury Road?

Developer Avalanche Studios’s Mad Max feels like an alternate universe version of Fury Road. The Max Rockatansky you play as looks nothing like actor Tom Hardy (or even the previous Max, Mel Gibson), and Imperator Furiosa is nowhere to be found. But it still takes place in the same world. In the beginning, Max loses his car to a warlord named Scabrous Scrotus who, according to his in-game bio, is one of the many sons of the terrifying Immortan Joe from Fury Road. Scrotus leads his own army of powder-covered War Boys, but unlike Joe’s men, these guys don’t have an obsession with Valhalla and all things shiny and chrome.

It’ll depend on how much you like tinkering with cars — the story focuses on building Max’s new set of wheels. You’ll spend a lot of time exploring the postapocalyptic wasteland to find car parts that’ll make your Magnum Opus vehicle strong enough to withstand the hordes of Scrotus. The car combat isn’t as epic or exciting as the big chase sequences from Fury Road (that might change; I haven’t finished it yet), but driving around is unnerving because War Boys can show up and attack at any time.

Mad Max is at its best when you’re getting to know the strange, dangerous, and sometimes friendly people living in the wasteland, which is something the film could only hint at. (For a different take, you can read GamesBeat writer Aleksander Gilyadov’s full review.) 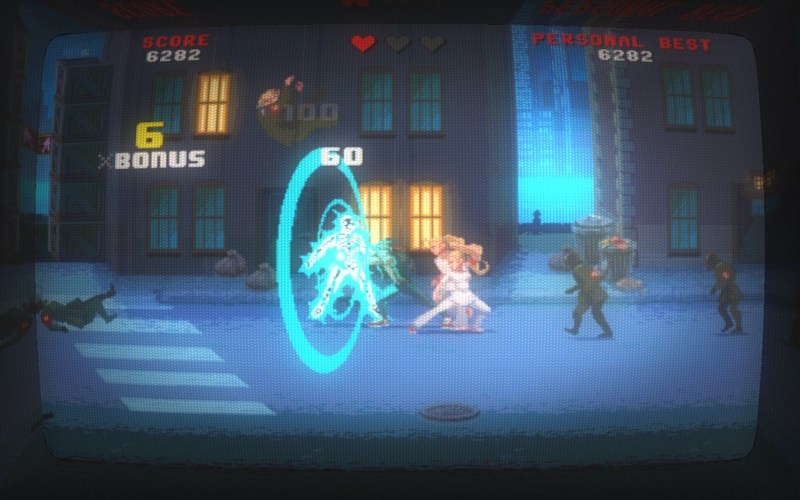 How does it tie into Kung Fury?

Kung Fury wasn’t in theaters, but the viral YouTube film (and its short companion game) are too funny not to mention here. Kung Fury: Street Rage (for PlayStation 4, PC, iOS, and Android) takes the ridiculous premise — a warrior cop from the ’80s goes back in time to kill Hitler, the self-proclaimed kung fu master Kung Führer — and boils it down to a two-button beat-’em-up. You fight wave after wave of Nazi soldiers and robots while Triceracop, Hackerman, and Fury’s other friends cheer him on from the sidewalk.

Is it any good?

Street Rage isn’t as crazy and over-the-top as the movie, but it does a fantastic job of channeling another ’80s staple: arcade games. Independent Swedish developer Hello There made it look as if you’re playing on a dimly lit CRT monitor. While the game sounds simple, it requires a bit of strategy. You can’t just mash buttons to get a high score. Some enemies die in one punch, but others are stronger and have distinct fighting patterns you have to exploit.

The challenge is to maintain the longest combo you can without missing or dying (it only takes three hits to kill you). It’s hard to put down. 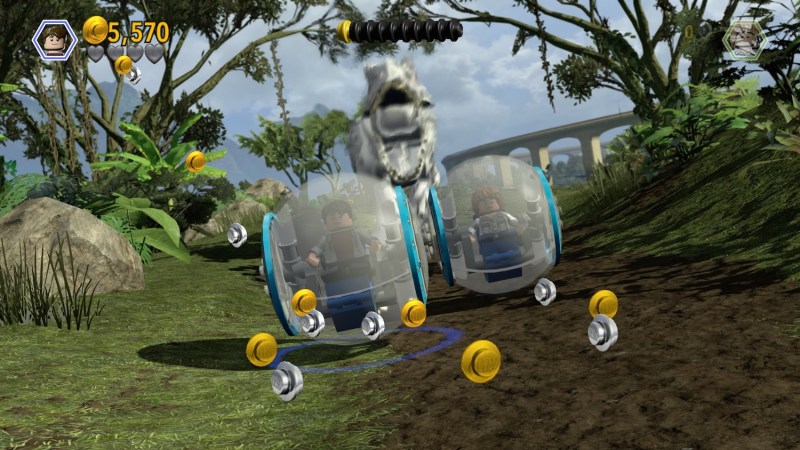 How does it tie into Jurassic World?

Lego Jurassic World (PlayStation 4, Xbox One, Wii U, PC and other consoles) depicts the events from the latest movie and from the original Jurassic Park trilogy. It feels like a throwback to the licensed games of yore. For Jurassic World, it covers all the major story beats, so if you haven’t seen it yet, you might not want to play this.

It even has dialogue taken directly from the movie. At first, it’s jarring to hear those lines coming from Lego people, but that bizarre contrast fits the farcical tone (the game has plenty of visual gags and jokes) that developer TT Games was going for.

Two words: playable dinosaurs. You can take control of all sorts of creatures, like when you’re helping an Ankylosaurus fight the Indominus Rex, or just causing mayhem in the theme park as a Pachycephalosaurus. The human Legos are fine, too. Beyond the movie’s stars, you can play as The Tonight Show host Jimmy Fallon and Jurassic World director Colin Trevorrow — but they’re just a means to an end. Lego Jurassic World is all about growing your collection of awesome dinosaurs.

Inside Out (playset for Disney Infinity 3.0) 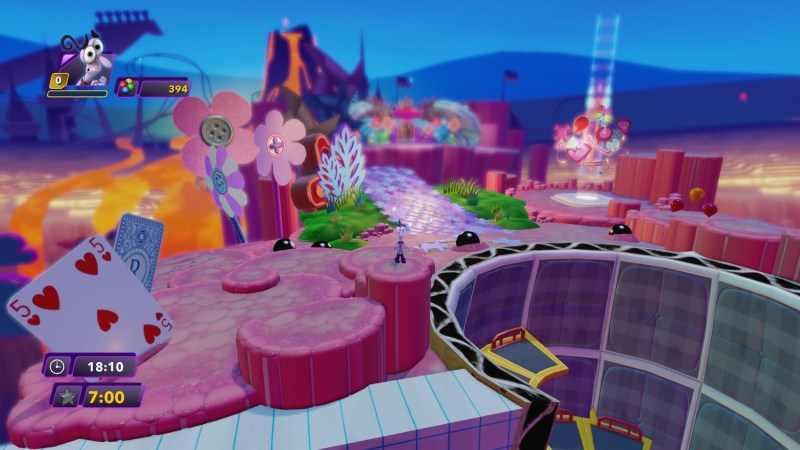 Above: Riley’s subconscious looks exactly like a 3D platformer.

How does it tie into Inside Out?

The Inside Out play set is an add-on for the recently released Disney Infinity 3.0 (PlayStation 4, Xbox One, Wii U, PS3, and Xbox 360). It begins with Imagination Land in shambles. Riley briefly saw a clip from a horror film on TV while falling asleep, causing a “subconscious breach”  in her imagination. Her emotions (Joy, Sadness, Fear, Anger, and Disgust) have to get it back in tip-top shape and recover any lost memory orbs before she wakes up.

The playset only comes with the Joy and Anger figurines, so if you want to play as the other three characters, you have to buy them separately (the play set and the toys came out on August 30).

The play set has an interesting mix of 3D and 2D platforming levels (the latter reminded me a lot of LittleBigPlanet) that gradually become more challenging. Sadly, most of that content is just mindless filler. The levels look so similar to each other that I accidentally replayed some of them because I wasn’t sure if they were new or not.

The game doesn’t expand on the original story in any meaningful way. Changes with the voice cast also didn’t help. Disney wasn’t able to get all the actors from the movie to return for the game, so some of the emotions (especially Joy) sound totally different.