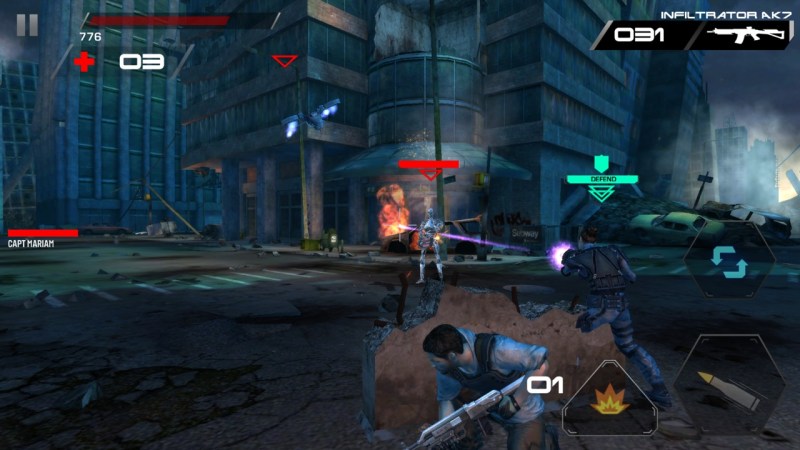 How does it tie into Terminator Genisys?

While the movie retconned the long-running franchise for the sole purpose of making new sequels (how else do you explain that ending?), Terminator Genisys: Revolution is about the humans vs. robots war. The iOS and Android shooter from developer Glu Games handles all the movement for you, so you just have to worry about popping out of cover and reloading your weapons. Instead of playing as John Connor, however, you’re a new guy named Alex Lopez. He was a prisoner at one of Skynet’s concentration camps who joined Connor’s resistance group after they broke in and set him free.

Revolution is a decent time killer for the first handful of missions. But after that, it becomes mind-numbingly repetitive, recycling the same types of missions over and over until you unlock a special battle that moves the story along. Then that whole process repeats several times until you can move on to the next city. I spent a lot of time trying to earn money to buy new weapons (necessary to unlock more missions), but they didn’t feel any different or more powerful than the old ones I had.

Revolution also has obtrusive full-screen video ads that seem to pop up every minute. How am I supposed to destroy Skynet when Kate Upton is all up in my face about Game of War? 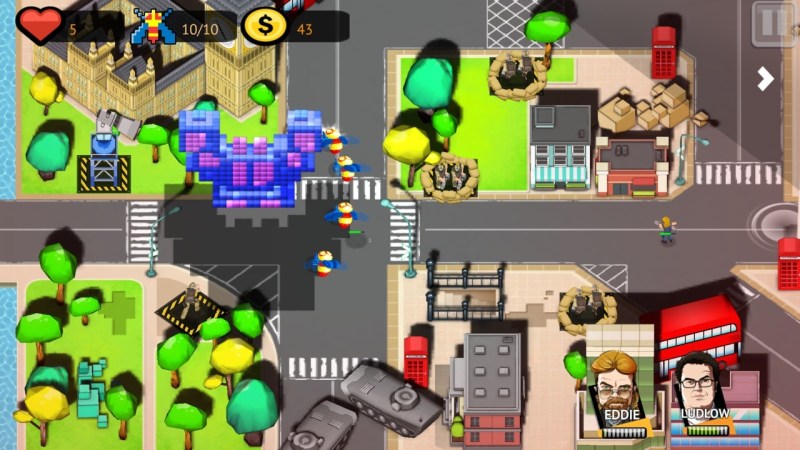 Above: Do yourself a favor and skip this one.

How does it tie into Pixels?

Pixels Defense (iOS and Android) is a free tower defense game loosely based on the events of the Adam Sandler film. All of the “arcader” heroes are playable, even the film version of Pac-Man creator Toru Iwatani. After picking two of the characters for battle, you have to defend cities around the world with the help of various weapons and soldiers. You’ll face pixelated monstrosities like the bugs from Centipede, aliens from Space Invaders, and a blue dragon from the fictional game Dojo Quest.

Think about this for a second: Pixels Defense is a game based on a movie about classic video game characters coming to life. On paper, that sounds like a disaster … and in reality, it kind of is. Each city only has two or three paths that enemies funnel through, so I never had to change my strategy that much (upgrading my long-range attack towers was enough to beat most levels). The music is obnoxious. And it didn’t matter which characters I picked because I couldn’t rely on them to kill enemies that were just inches away from them.

On the bright side, Pixels Defense does a good job of illustrating actor Peter Dinklage’s fake mullet. 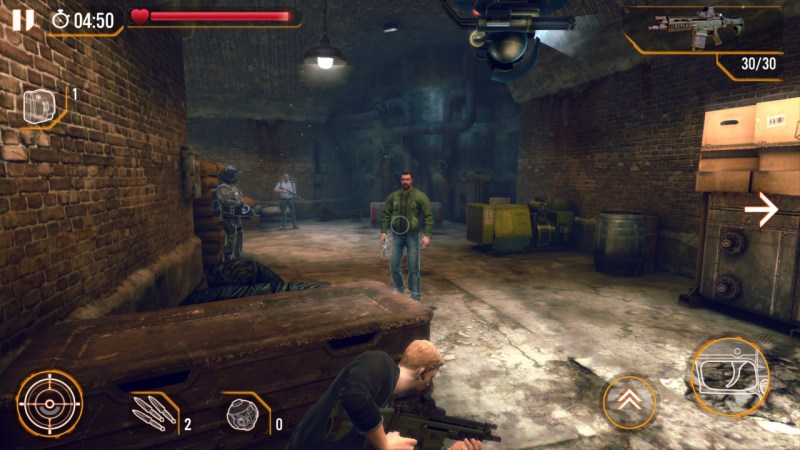 Above: Kane is stuck with cover shooting duties while Ethan Hunt gets to break into planes.

How does it tie into the film?

Mission: Impossible — Rogue Nation (iOS and Android) ignores the characters and most of the storyline from the movie. Instead of playing as perennial hero Ethan Hunt (I imagine it’s expensive to license actor Tom Cruise’s likeness), you’re in the shoes of Trent Kane, another Impossible Missions Force agent. It’s Kane’s job to investigate Hunt’s mysterious disappearance. He also has to take down the Syndicate, the same criminal organization that Hunt was looking for.

Glu Games somewhat redeems itself here. Though Rogue Nation follows the same format of Terminator Genisys: Revolution, I enjoyed the Mission: Impossible shooter a hell of a lot more. Even firing my gun looked and sounded better in Rogue Nation than in the Terminator game. It has more content, including better mission variety, and an upgradeable drone that accompanies you in battle. Kane can also move from different pieces of cover using arrows on the screen. It’s not a major or innovative addition, but that small degree of control made me feel more involved in the fights. 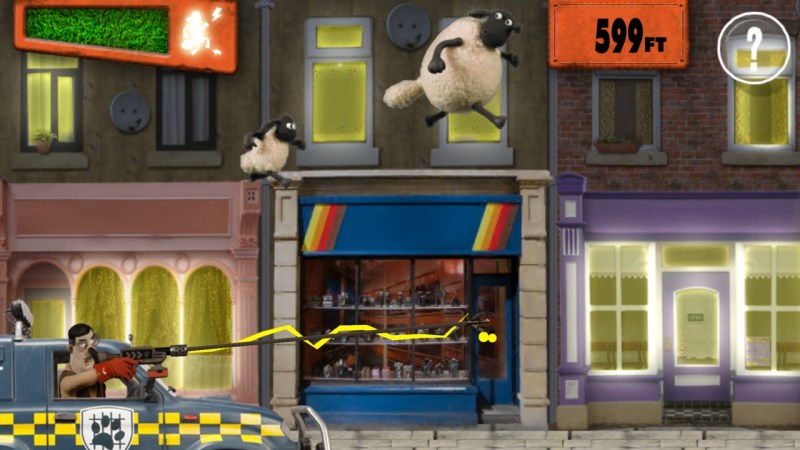 Above: Fun fact: When in danger, sheep can easily leap over a car.

How does it tie into Shaun the Sheep Movie?

Shear Speed is an endless running game on iOS and Android that features characters from the stop-motion animated movie. Shaun and his sheep pals are running away from Trumper, a vengeful animal control employee.

It’s a simple concept that nails the addictiveness of other endless runner games. You have to jump and roll to avoid different obstacles, like Trumper’s electrified grabbing gun. It rewards you with a cute cameo of another character from the movie whenever you break your previous distance record. Aardman Animations, the animation studio behind Shaun the Sheep Movie, made Shear Speed as well, so it also has that cool claymation look.

The Man from U.N.C.L.E.: Mission Berlin 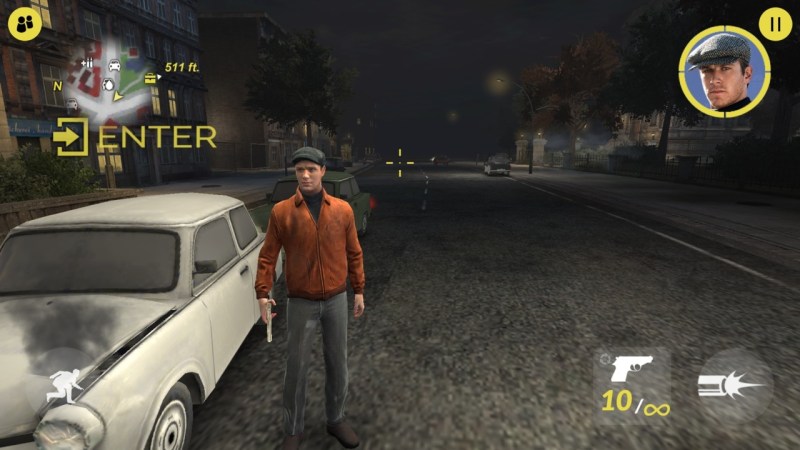 Above: I’d also be grumpy if I were in a bad Grand Theft Auto clone.

The film reboot of the classic spy vs. spy TV series shows up on iOS, Android, and your browser as a free open-world action game. It takes place at the beginning of the film, and has the likenesses of actors Henry Cavill (agent Napoleon Solo) and Armie Hammer (agent IlIya Kuryakin). You can play as either one of the handsome heroes and go on simple missions through a strangely empty version of Berlin in the 1960s.

Mission Berlin has no personality. Solo and Kuryakin couldn’t be more different from each other in the film, but in this game, they have the same set of skills. For some inexplicable reason, developer Warner Bros. put aiming and shooting on the same button in the iOS version, making combat a chore. I’m still not sure how I managed to kill anyone in this game.

Missions are just variations of killing guards and collecting intel, a process that repeats ad naseum without much context. It’s so boring that even cheat codes (easily found through Google) like infinite ammo and health aren’t enough to save it.